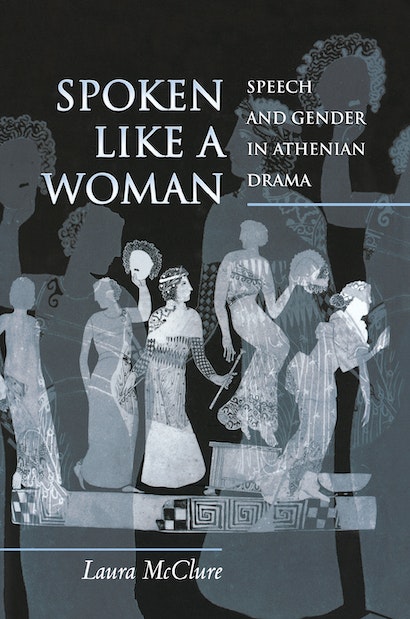 In ancient Athens, where freedom of speech derived from the power of male citizenship, women’s voices were seldom heard in public. Female speech was more often represented in theatrical productions through women characters written and enacted by men. In Spoken Like a Woman, the first book-length study of women’s speech in classical drama, Laura McClure explores the discursive practices attributed to women of fifth-century b.c. Greece and to what extent these representations reflected a larger reality. Examining tragedies and comedies by a variety of authors, she illustrates how the dramatic poets exploited speech conventions among both women and men to construct characters and to convey urgent social and political issues.

From gossip to seductive persuasion, women’s verbal strategies in the theater potentially subverted social and political hierarchy, McClure argues, whether the women characters were overtly or covertly duplicitous, in pursuit of adultery, or imitating male orators. Such characterization helped justify the regulation of women’s speech in the democratic polis. The fact that women’s verbal strategies were also used to portray male transvestites and manipulators, however, suggests that a greater threat of subversion lay among the spectators’ own ranks, among men of uncertain birth and unscrupulous intent, such as demagogues skilled in the art of persuasion. Traditionally viewed as outsiders with ambiguous loyalties, deceitful and tireless in their pursuit of eros, women provided the dramatic poets with a vehicle for illustrating the dangerous consequences of political power placed in the wrong hands.

Laura McClure is Associate Professor of Classics at the University of Wisconsin-Madison.

"A useful, occasionally provocative overview of the politics of gendered diction."—Choice

"Spoken Like a Woman is excellently grounded in recent work on social history, in particular on the social regulation of women's speech in classical Athens. The discussions of individual plays are original and illuminating. The book will be indispensable reading for those researching women in Greek drama or gender in ancient literature."—Edith Hall, Somerville College, Oxford