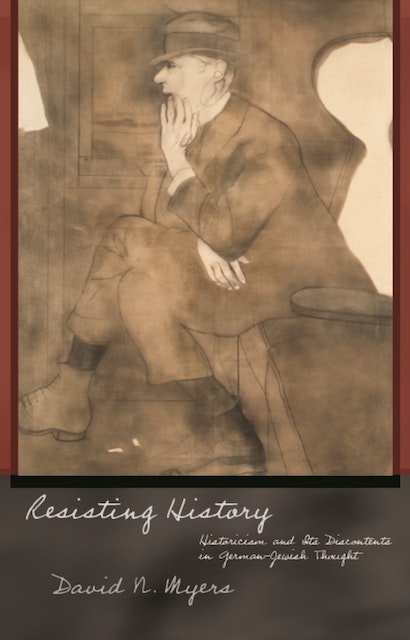 Nineteenth-century European thought, especially in Germany, was increasingly dominated by a new historicist impulse to situate every event, person, or text in its particular context. At odds with the transcendent claims of philosophy and — more significantly — theology, historicism came to be attacked by its critics for reducing human experience to a series of disconnected moments, each of which was the product of decidedly mundane, rather than sacred, origins. By the late nineteenth century and into the Weimar period, historicism was seen by many as a grinding force that corroded social values and was emblematic of modern society’s gravest ills. Resisting History examines the backlash against historicism, focusing on four major Jewish thinkers. David Myers situates these thinkers in proximity to leading Protestant thinkers of the time, but argues that German Jews and Christians shared a complex cultural and discursive world best understood in terms of exchange and adaptation rather than influence.

After examining the growing dominance of the new historicist thinking in the nineteenth century, the book analyzes the critical responses of Hermann Cohen, Franz Rosenzweig, Leo Strauss, and Isaac Breuer. For this fascinating and diverse quartet of thinkers, historicism posed a stark challenge to the ongoing vitality of Judaism in the modern world. And yet, as they set out to dilute or eliminate its destructive tendencies, these thinkers often made recourse to the very tools and methods of historicism. In doing so, they demonstrated the utter inescapability of historicism in modern culture, whether approached from a Christian or Jewish perspective.

David N. Myers is Professor of Jewish History and Vice-Chair of the History Department at the University of California, Los Angeles, and the author of Re-Inventing the Jewish Past.

"David N. Myer's sparkling new book studies what happened to Jewish thought when, in modern times, history left behind its earlier, sacred incarnations and became a subject of secular investigation by critical scholars. . . . Two innovations in Myer's book are especially noteworthy. First, Myers integrates the study of Jewish trends with the examination of corresponding Christian developments, since they were often contemporaneous. . . . Second, Myers is especially interested in the ways in which his protagonists reacted to the project of Jewish history. . . . Not the least of the accomplishments of Myer's outstanding work of history is that, intentionally or not, it raises the question of whether history is up to the acknowledgement of its own limitations."—Samuel Moyn, The Forward

"As David Myers maintains in his fine new book, nowhere was the challenge of secular history more keenly felt than among the Jews of Germany. One virtue of Myer's book is that he places his subject within the wider 'crisis of historicism' that shaped nineteenth- and early twentieth-century German thinking about every aspect of social life, from politics to religion and the arts."—Mark Lilla, The New Republic

"Resisting History is a major contribution to the study of Jewish thought. Myers' research is impeccable and he articulates his insightful theses convincingly. This monograph will appeal to scholars and general audiences alike."—Jewish Book World

"If the Christian confrontation with historicism is well documented, much less is known about that of Judaism. For this reason alone, David Myers' recent book represents an important contribution to contemporary understanding; his work should elicit interest from students of Jewish, Christian, German, and modern thought alike."—Thomas Albert Howard, Books & Culture

"No brief review like this can convey the quality of this book. Its richness of detail in integrating German and German-Jewish responses to the rise of historicism in the wake of the Enlightenment; its objective yet compassionate handling of the particular contributions Hermann Cohen, Franz Rosenzweig, Leo Strauss, and Isaac Breuer made to arrest historicism's 'double-barreled assault on transcendent values'; the correspondences and differences in their thinking and the impact of their writings on modern Judaism: these and many other qualities make this book memorable."—Ute Stargardt, Shofar

"This is a fine study of a group of early-twentieth-century German-Jewish thinkers who have generally received too little attention. Their mainly skeptical attitude toward Zionism presages later intellectual and political quandaries. And their appreciation for the theologically and morally destructive implications of historicism is in many ways equally prescient."—Susan Meld Shell, Hebraic Political Studies

"For anyone interested in German-Jewish thought, this book is a must-read. Myers shows an elegant command of his subject matter and is rightly considered an authority in the field. This book should, however, be equally fascinating for those interested in the philosophy of history or historical thought in the twentieth century in general."—Josiah Simon, European Legacy

"In Resisting History, David Myers places himself among the most skillful and penetrating interpreters of the modern Jewish intellectual experience. Myers offers an exciting and compelling analysis that demonstrates how the 'historicist readings' of the Jewish past inaugurated by the nineteenth-century practitioners of juedische Wissenschaft gave way to a host of 'antihistoricist' twentieth-century cultural-religious-philosophical alternatives. Resisting History compels the reader to reflect on the subtle dialectics involved in the encounter between Jewish tradition and the modern world as Jews—like other moderns—engage in the ongoing human task of constructing meaning. This book will deservedly command a large audience."—David Ellenson, President, Hebrew Union College-Jewish Institute of Religion

"Antihistoricism may have also its own history. David Myers's masterpiece convincingly demonstrates that in Judaism its modern manifestations certainly have a precise geography. After chartering the historicistic approach in what he calls the Jerusalem-school in his first book, in this fascinating and well-documented study he turns back to map the main stages of the German-Jewish exponents of the attempt to resist German historicism. Indubitably, a major contribution to modern Jewish intellectual history and thought."—Moshe Idel, Hebrew University, author of Absorbing Perfections

"It is one of the great paradoxes of modernity that historians are our idol-smashers but history is our idol. David Myers's fascinating and erudite book tells the refreshing tale of Jewish philosophers and theologians who refused to allow history the last word in the understanding of life. He shows that there was a day, not so long ago, when facts were not the most cherished possession of culture, and metaphysical speculation was the enemy of intellectual complacence, and time was the beginning of reflection and not its end. Myers has written a stirring and significant chapter in the history of the limits of history, a genuinely critical book."—Leon Wieseltier

"This is Jewish intellectual history at its best. Myers opens a new gate to the way that modern Jews looked at their history. Without any doubt, this book—opposing many opinions that have thus far been taken for granted—will have a major impact on future work in Jewish Studies. The broad topic, the depth of research, the plethora of new sources, and last but not least the beautiful style should appeal to an audience beyond the circles of Jewish Studies."—Michael Brenner, author of The Renaissance of Jewish Culture in Weimar Germany