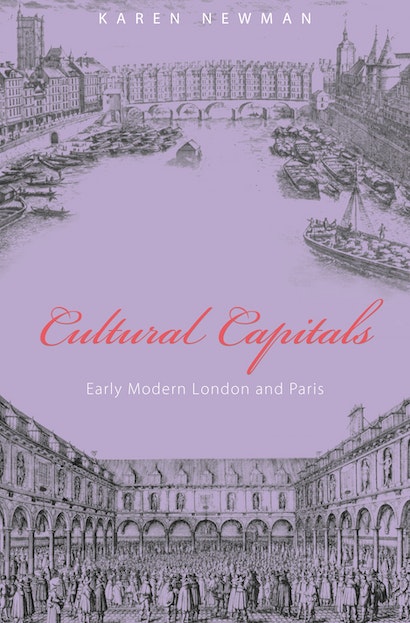 Social theories of modernity focus on the nineteenth century as the period when Western Europe was transformed by urbanization. Cities became thriving metropolitan centers as a result of economic, political, and social changes wrought by the industrial revolution. In Cultural Capitals, Karen Newman demonstrates that speculation and capital, the commodity, the crowd, traffic, and the street, often thought to be historically specific to nineteenth-century urban culture, were in fact already at work in early modern London and Paris.

Newman challenges the notion of a rupture between premodern and modern societies and shows how London and Paris became cultural capitals. Drawing upon poetry, plays, and prose by writers such as Shakespeare, Scudéry, Boileau, and Donne, as well as popular materials including pamphlets, ballads, and broadsides, she examines the impact of rapid urbanization on cultural production. Newman shows how changing demographics and technological development altered these two emerging urban centers in which new forms of cultural capital were produced and new modes of sociability and representation were articulated.

Cultural Capitals is a fascinating work of literary and cultural history that redefines our conception of when the modern city came to be and brings early modern London and Paris alive in all their splendor, squalor, and richness.

"Newman's handsomely produced volume is a true work of cultural history: wide-ranging and purposefully interdisciplinary. Newman boldly attempts to locate the beginnings of the 'ways of thinking, believing, and acting that we have come to call modern' in the early modern city. In bringing early modern London and Paris together so productively, she has, as she intended, made those scholars familiar with one or the other, or even both, reconsider what they thought they knew."—Tracey Hill, Renaissance Quarterly

"In Cultural Capitals, Karen Newman sets out to explore what this dramatic urban transformation meant for those who lived in [London and Paris]. . . . Through close readings of the representations made of these cities—in maps, engravings and surveys, as well as in plays and poetry—Newman seeks out the points of tension and contention in these early modern urban societies."—Miles Ogborn, London Journal

"Witty, yet substantiated with serious footnotes, Newman joins scholarship with the irony of the post-modern critic in such a way as to make us all wish to know better early modern Paris and London."—Ronald C. Rosbottom, French Review

"Cultural Capitals is a worthy effort, but it is not the last word, it is only the beginning of what should prove a new avenue of study. Professor Newman has presented her readers with a number of intriguing ideas that other scholars may in the future explore in greater depth and with new insights."—Clifton W. Potter Jr., Review of English Studies

"Karen Newman's fascinating study contests the idea that the urbanization of Europe is a 19th-century phenomenon."—The Guardian

"[Cultural Capitals] offers some brilliant analysis of the kind only the best literary scholars can produce, but it is not concerned with historical questions. . . . It is a literary study by an author who is deeply interested in history, who reads widely in the historical literature, and who has some perceptive observations to make about the approaches adopted by historians."—David Garrioch, H-France Review

"[H]istorians of London and Paris will enhance their knowledge by reading [this] work. . . . Cultural Capitals is . . . suited to an advanced undergraduate or postgraduate audience."—T. Reinke-Williams, Journal of Urban History

"[T]his is a deeply thoughtful and study that belongs on the shelf of anyone interested in early modern urban culture."—Malcolm Smuts, Modern Philology

"Written with ease and panache, Cultural Capitals is an archivist's tale of two cities. As the double entendre of the title indicates, the book also deals with circulation of goods, commodities, and even, in a psychogeographical sense, drives and desires. It reaps rewards for students on both sides of the Channel and, furthermore, for amateurs of the classical age, describes the orders and odors of life as it was lived in the streets and urban byways, a world today too often overshadowed by the pomp of Versailles or the Restoration."—Tom Conley, Harvard University

"This is an original, wide-ranging, genuinely interdisciplinary study of seventeenth-century culture in two cities, Paris and London. Newman's reading for the project is massive, up to date, and impressive—philosophies of space, economic theory, materialist histories, and epistemologies of city life. She centers each chapter on her own analyses of literary texts and also of semiliterary genres such as maps, traveler's memo books, travel guides, and urban monuments. A learned, lively book."—Ann R. Jones, Smith College

"This is an exciting new approach to cultural history, from an established and highly regarded scholar. The book focuses on London and Paris, the two largest, most diverse, and most culturally vibrant cities of northern Europe in the early modern period. The book is rich in quotation. The writing is fluent and elegant."—Vanessa Harding, author of The Dead and the Living in Paris and London, 1500-1670