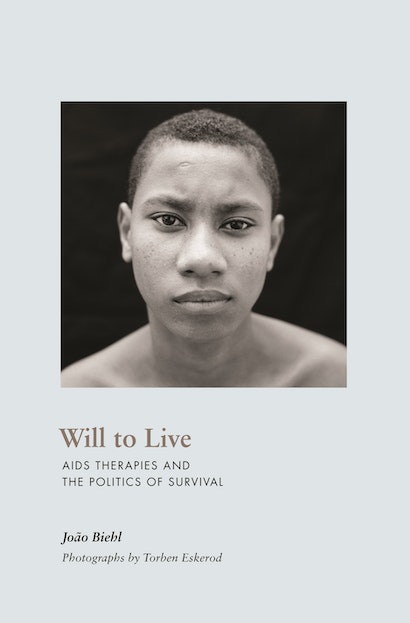 Will to Live tells how Brazil, against all odds, became the first developing country to universalize access to life-saving AIDS therapies — a breakthrough made possible by an unexpected alliance of activists, government reformers, development agencies, and the pharmaceutical industry. But anthropologist João Biehl also tells why this policy, hailed as a model worldwide, has been so difficult to implement among poor Brazilians with HIV/AIDS, who are often stigmatized as noncompliant or untreatable, becoming invisible to the public. More broadly, Biehl examines the political economy of pharmaceuticals that lies behind large-scale treatment rollouts, revealing the possibilities and inequalities that come with a magic bullet approach to health care.

By moving back and forth between the institutions shaping the Brazilian response to AIDS and the people affected by the disease, Biehl has created a book of unusual vividness, scope, and detail. At the core of Will to Live is a group of AIDS patients — unemployed, homeless, involved with prostitution and drugs — that established a makeshift health service. Biehl chronicled the personal lives of these people for over ten years and Torben Eskerod represents them here in more than one hundred stark photographs.

Ethnography, social medicine, and art merge in this unique book, illuminating the care and agency needed to extend life amid perennial violence. Full of lessons for the future, Will to Live promises to have a lasting influence in the social sciences and in the theory and practice of global public health.

João Biehl is professor of anthropology at Princeton University. Torben Eskerod is an artist and freelance photographer based in Copenhagen. The two also collaborated on the award-winning book Vita: Life in a Zone of Social Abandonment.

"Biehl's powerful ethnography beautifully mixes visual and written portraits of those who lived and died as Brazil developed its public health and policy responses to AIDS. The author gives voice to those at the margins—the poor, the homeless, homosexuals, drug addicts, transvestites, prostitutes—who remained stigmatized and invisible as Brazil universalized access to AIDS therapies. . . . Biehl convincingly argues the importance of understanding the history and politics of AIDS pharmaceuticalization, the role of social mobilization, and the invisibility of the marginalized in official statistics and care in grasping the reality of AIDS in Brazil."—E.J. Schatz, Choice

"In Will to Live, João Biehl combines critical public health, ethnography, and even a mini epidemiological survey, studying AIDS therapies up, down, and sideways. . . . The running commentary from major decision-makers in the novel Brazilian approach to AIDS provides both insights and rather transparent post facto justifications for the state's regulatory practices. These are nicely complemented by activist and patient critiques throughout the text."—Matthew Gutmann, American Ethnologist

"Biehl's ethnography is already a paradigmatic example of how transformations in subjectivities and social experience can be investigated at all levels: personal, social, political, and global. The book is also exceptional, while describing in fruitful ways, complex interconnections that might occur within and across levels of lived experience. . . . I strongly recommend this book to all those interested in pursuing anthropological investigations emphasizing the conceptual significance of lived experience through 'experience-near' analyses and 'thick description.'"—Cristina Redko, Ethos

"[João Biehl's] book is important for understanding a complex public health program in a developing country. It is well written; the chapter that contains patients' testimonies is particularly emotional and poignant."—Carlos M.F. Antunes, Sc.D., New England Journal of Medicine

"[Will to Live] argues that, despite the government's commitment, treatment has been difficult to implement among HIV-positive poor Brazilians, who are often stigmatized."—Chronicle Review

"Will to Live is a compellingly crafted study of AIDS in Brazil, an exemplar of how careful ethnographic work can illuminate the place of everyday life in the constitution of, and response to, globalizing forces. . . . I bring a unique understanding of, and appreciation for, Biehl's achievement. It is significant."—Tom Boellstorff, Journal of Anthropological Research

"This is an insightful read for those interested in medical anthropology, the pharmaceutical industry, medical ethics, AIDS activism, and health studies. It is an essential tool for those seeking to understand the complexity of tackling the AIDS issue on the ground level."—Lindsay Sprague, Anthropology in Action

"Will to Live is an impressive and moving analysis by an engaged ethnographer. . . . Biehl presents a powerful example of how ethnographic investigation can illuminate the fine details and trajectories of people's lives while also informing critical analysis of broad shifts in global and national health policies."—Steven Epstein, American Journal of Sociology

"Will to Live is a wonderful contribution not only to anthropology but also to social medicine, medical ethics, and our understanding of the pharmaceutical industry. At the same time, it provides an intimate view of what it's like to live with both AIDS and poverty in Brazil. This is one of the few studies of AIDS than can claim to move easily between a deeply affecting psychological analysis, born of careful ethnographic work and of long-term conversations few are privileged to have, and a more experience-distant look at diagnostic technologies, the way drugs are used, and the medical professionals who deliver care. The photographs by Torben Eskerod are both beautiful and haunting and lend even more depth to this remarkable book."—Paul E. Farmer, Harvard University, and founding director of Partners In Health

"João Biehl's Will to Live is one of the most exceptional studies of the response to HIV and AIDS that I have ever had the chance to read. I believe that it will become a true classic in this field of research."—Richard G. Parker, Columbia University

"Will to Live is a terrific ethnography and a major scholarly study. It is going to be widely read and have a big impact because it tells the story of Brazil's public response to HIV and AIDS—the most important and innovative one in the developing world. The photographs are superbly well-fitted to the ethnography, their artistry wonderfully evocative."—Arthur Kleinman, Harvard University

"This is a brilliant book, an arresting exposé of the world of AIDS treatment access. Biehl moves artfully between the bureaucratic and the intimate until the bureaucratic loses its abstract status as powerfully removed from the intimacy of everyday life. Will to Live is a major contribution to medical anthropology, science studies, politics, and public health—all fields that must now deal with the human costs and changing structures of power driven by the contemporary dynamics of neoliberalism and globalization."—Kay Warren, Brown University