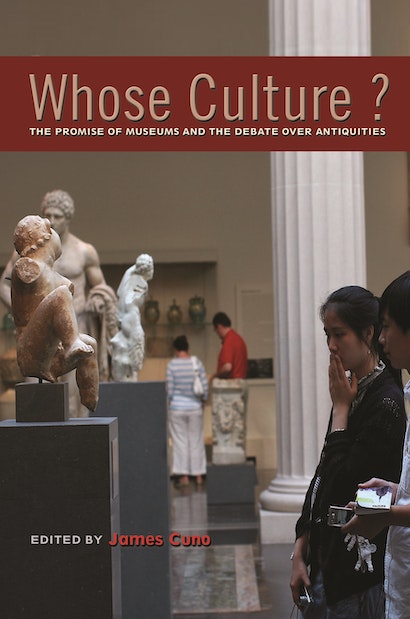 The international controversy over who “owns” antiquities has pitted museums against archaeologists and source countries where ancient artifacts are found. In his book Who Owns Antiquity?, James Cuno argued that antiquities are the cultural property of humankind, not of the countries that lay exclusive claim to them. Now in Whose Culture?, Cuno assembles preeminent museum directors, curators, and scholars to explain for themselves what’s at stake in this struggle — and why the museums’ critics couldn’t be more wrong.


Source countries and archaeologists favor tough cultural property laws restricting the export of antiquities, have fought for the return of artifacts from museums worldwide, and claim the acquisition of undocumented antiquities encourages looting of archaeological sites. In Whose Culture?, leading figures from universities and museums in the United States and Britain argue that modern nation-states have at best a dubious connection with the ancient cultures they claim to represent, and that archaeology has been misused by nationalistic identity politics. They explain why exhibition is essential to responsible acquisitions, why our shared art heritage trumps nationalist agendas, why restrictive cultural property laws put antiquities at risk from unstable governments — and more. Defending the principles of art as the legacy of all humankind and museums as instruments of inquiry and tolerance, Whose Culture? brings reasoned argument to an issue that for too long has been distorted by politics and emotionalism.

James Cuno is president and CEO of the J. Paul Getty Trust and former director of the Art Institute of Chicago. His books include Who Owns Antiquity?: Museums and the Battle over Our Ancient Heritage (Princeton).

"In this new collection of essays, Cuno has also assembled a group of broadly like-minded colleagues, both museum curators and academics, all of whom affirm, from a variety of perspectives, why great encyclopaedic collections can, and ought, to exist. . . . [The volume] marks an important advance. After an uncertain, not to say timorous, few decades, the leadership of at least some of our major institutions has found its voice. More than that, it has rediscovered something approaching a set of shared values—and, as Whose Culture? makes clear, it is ready to take on all comers in their defence."—John Adamson, Standpoint Magazine

"[Cuno] has emerged as the champion of museums who want to keep their holdings—and not a moment too soon. . . . Cuno speaks the cosmopolitan language of cultural pluralism. The other side, insisting that art remain where it happened to be found, deploys the rhetoric of jealous nationalism in the service of government. Culture matters more than concocted national pride, as curators and museum directors know. At last they're re-asserting their principles, after an embarrassing period of passivity and pusillanimity."—Robert Fulford, The National Post

"For the general reader seeking to get up to speed on this critically important debate, this volume is destined to become an indispensable guide. Each contributor makes salient points in favour of their museological argument."—Tom Mullaney, The Art Newspaper

"In stressing the multiple meanings—aesthetic, textual, political, ritual—that an object may have, these contributors oppose the claim that art divorced from its archaeological setting is a cosa morta ('dead thing')."—Hugh Eakin, New York Review of Books

"A welcome challenge to repatriation policies underpinned by identity politics. . . . Whose Culture? is a long-needed intervention in the debate about the role of museums. Cultural institutions have been on the defensive for decades, poorly firefighting accusations of didacticism, elitism, colonisation and looting, with ill-thought through mumbling and evasion. . . . Museums need to defend openly their use and purpose and make a strong case for the invaluable role they play in the preservation, presentation and study of artefacts. Cuno does just that."—Tiffany Jenkins, Spiked Magazine

"Far from being an esoteric, jargon-filled look at a debate between archaeologists and collectors of antiquities, these essays, some from conference presentations, some philosophical, and some impassioned, show that the whose-cultural-property debate runs parallel to and intersects other problem areas in the modern world."—N.S. Gill, About.com

"[T]his book should give both sides of the antiquities debate much to think (and talk) about."—William H. Krieger, Religious Studies Review

"Whose Culture? makes the strongest case yet for an internationalist approach to the protection and ownership of ancient cultural heritage, and against its nationalization by modern states on political and ideological grounds. Cuno argues that effective measures against the looting of ancient sites do not require exclusively nationalistic ownership, and that a more enlightened international framework would allow cultural heritage to continue to serve an ambassadorial role as a stimulus to artistic and cultural interaction. This book is essential reading for anyone interested in this increasingly important debate."—Timothy Potts, director of the Fitzwilliam Museum, University of Cambridge

"This book stands in opposition to widespread claims—primarily from the archaeological community—that museums' collecting of ancient works encourages looting and the illegal trade in antiquities. It thus advances what in the current climate is a sectarian position, but one supported by most museum curators and directors. Given the stature of the editor and distinguished contributors, Whose Culture? presents this perspective at the highest level of discussion."—Bruce Altshuler, director of the Program in Museum Studies at New York University

"This is a very timely book. Events like the leveling of criminal charges by the Italian government against a former curator at the J. Paul Getty Museum and the widespread pillaging of antiquities in Iraq have transformed the longstanding international controversy over who legitimately 'owns' antiquities into a hot topic. This book will provide a basis for informed, intelligent debate."—Jerome J. Pollitt, professor emeritus, Yale University

"A balanced and illuminating overview of a hotly contested issue, Whose Culture? focuses on the debate among museum officials, archaeologists, and government leaders about the movement of insufficiently documented antiquities from their countries of origin to international art markets and the museums of other countries. This is a high-stakes problem for all involved and the book offers a multifaceted discussion about the handling of such antiquities now and policy implications for the future."—Jeffrey Abt, author of A Museum on the Verge