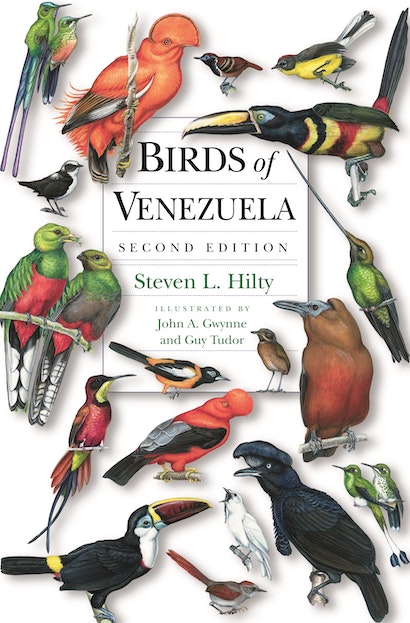 Venezuela has an immensely rich bird fauna, with 1,381 known species, many of them found nowhere else in the world. This spectacularly illustrated, comprehensive, and up-to-date guide brings together under one cover much of what is known about these species. Its users can identify all the birds in this vast country, from the Caribbean coast in the north to the Amazonian jungles in the south, from the Andes in the west to the Gran Sabana plateau in the east.

With a completely new text by Steven Hilty, Birds of Venezuela is a greatly expanded and thoroughly reformatted successor to the pioneering Guide to the Birds of Venezuela (Princeton,1978). It includes sixty-seven beautiful color and black-and-white plates, most by the well-known artists John Gwynne and Guy Tudor, as well as numerous line drawings. The plates and drawings together — almost half of them never before published — depict most of Venezuela’s bird species. Introductory chapters cover physical geography, climate, biogeography, vegetation and habitats, conservation, migration, and the history of ornithology in Venezuela. A gallery of forty-four stunning color habitat photos and color habitat and relief maps complete the opening section.

Detailed range maps plot collection localities and sight records — a unique feature — for almost all species. Plumage descriptions are provided for each bird, as is extensive information on voice, behavior, and status. More than 800 bibliographic entries accompany the text, making this book an invaluable and broad-based reference to the avifauna of not only Venezuela but much of northern South America. Treating nearly 40 percent of the continent’s bird species, Birds of Venezuela is the definitive resource for all birders with an eager eye on this splendorous country and the surrounding region.

Steven L. Hilty, one of the world's leading specialists in neotropical ornithology, has led birding tours to more than twenty countries. He is the author of Birds of Tropical America: A Watcher's Introduction to Behavior, Breeding and Diversity and the coauthor of A Guide to the Birds of Colombia.

"This is a state-of-the-science field guide that will remain essential to birders, biologists and biodiversity workers for years to come."—Adrian Barnett, New Scientist

"An amazingly useful resource, indispensable in the field."—John Kricher, Birding

"The Birds of Venezuela has come of age. The first edition was a marvel when it appeared back in 1978: the first book on a South American avifauna to be accurately and beautifully illustrated, by Guy Tudor. Now Steve Hilty has given us a text to match the quality of the plates, which themselves have here been substantially expanded by John Gwynne. Good succinct behavioral and vocal information, accurate and clear distribution maps, and lots of new ID information, all combine to be just what field observers and ornithologists have wanted. It was worth the wait."—Robert Ridgely, Director, International Bird Conservation, National Audubon Society