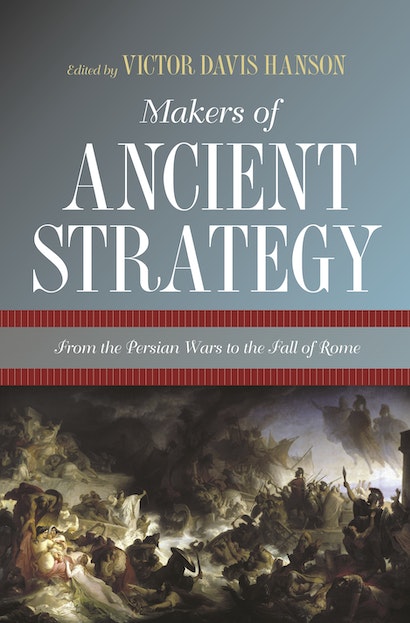 In this prequel to the now-classic Makers of Modern Strategy, Victor Davis Hanson, a leading scholar of ancient military history, gathers prominent thinkers to explore key facets of warfare, strategy, and foreign policy in the Greco-Roman world. From the Persian Wars to the final defense of the Roman Empire, Makers of Ancient Strategy demonstrates that the military thinking and policies of the ancient Greeks and Romans remain surprisingly relevant for understanding conflict in the modern world.

The book reveals that much of the organized violence witnessed today—such as counterterrorism, urban fighting, insurgencies, preemptive war, and ethnic cleansing—has ample precedent in the classical era. The book examines the preemption and unilateralism used to instill democracy during Epaminondas’s great invasion of the Peloponnesus in 369 BC, as well as the counterinsurgency and terrorism that characterized Rome’s battles with insurgents such as Spartacus, Mithridates, and the Cilician pirates. The collection looks at the urban warfare that became increasingly common as more battles were fought within city walls, and follows the careful tactical strategies of statesmen as diverse as Pericles, Demosthenes, Alexander, Pyrrhus, Caesar, and Augustus. Makers of Ancient Strategy shows how Greco-Roman history sheds light on wars of every age. In addition to the editor, the contributors are David L. Berkey, Adrian Goldsworthy, Peter J. Heather, Tom Holland, Donald Kagan, John W. I. Lee, Susan Mattern, Barry Strauss, and Ian Worthington.

Victor Davis Hanson is the Martin and Illie Anderson Senior Fellow in Classics and Military History at the Hoover Institution, Stanford University. He is a recipient of the National Humanities Medal. His many books include A War Like No Other and Between War and Peace. He is a syndicated columnist for Tribune Media Services, and is the current codirector of the group on military history and contemporary conflict at the Hoover Institution.

"The book is a worthwhile read and some of the articles would do well as reading material on courses of ancient warfare or even modern strategic studies."—Joonas Sipila, Acto Philogica Fennica

"At every point throughout this superb collection of essays, one cannot but reflect on Western engagements in far-off, alien places."—Peter Jones, Sunday Telegraph

"Mr. Hanson's examination of the dangers implicit in pre-emptive warfare is riveting, as is John W.I. Lee's explanation of why the specter of urban warfare was as despised by ancient strategists as it is today by modern warriors. . . . Mr. Hanson and Mr. Luttwak have begun the serious study of what the ancients might have to teach us about a world where traditional nation-states not only have to coexist with armed non-state actors but must negotiate with them on nearly equal terms or sometimes fight them."—Gary Anderson, Washington Times

"This is a worthy edition to the literature of military history."—Kevin Winter, Sacramento Book Review

"The essays are all thought provoking, and readers will find surprises, insights, and things to argue about."—Choice

"Coming up for air after a couple of hours with this recent Victor Davis Hanson book, I switched on CNN and was briefly confused as to what century it was. Did his point on the overwhelming impact of organized military force refer to Moammar Gaddafi's generals chasing down Libyan rebels or to Roman soldiers crushing a slave revolt? The parallels are striking. 'Spartacus was overmatched by the logistics, discipline and generalship of the Roman legions,' Hanson writes in his fine introduction to Makers of Ancient Strategy: From the Persian Wars to the Fall of Rome. The Libyan rebels face the same odds today, reduced by Western media to a 'ragtag' band of fighters rapidly losing the initiative, pretty much like those of Spartacus when it all ended for him. Hanson, a senior fellow at the Hoover Institution and a respected military historian, has assembled here ten succinct studies by academic colleagues that demonstrate, with variable persuasiveness, the 'relevance of the past to military challenges of the present.' . . . Hanson encouraged his contributors to choose a subject of special interest to them. As a result, the studies make for a diverse and refreshing collection."—Michael Johnson, American Spectator

"All serious students of military strategy must have on their bookshelves Makers of Modern Strategy. In this essential prequel to that classic volume, Victor Davis Hanson has assembled an all-star team of historians to analyze past conflicts and draw relevant lessons for the present day. If you seek the roots of modern warfighting, look here."—Max Boot, author of War Made New: Technology, Warfare, and the Course of History, 1500 to Today

"In this outstanding collection, ancient historian and thoroughly modern pundit Victor Davis Hanson has assembled a gleaming cohort of historians who deepen our understanding of the constants of warfare and illuminate brightly the peculiarities of strategy in the worlds of ancient Greece and Rome. Today's makers of strategy and war as well as students of antiquity will be informed and stimulated by fascinating essays that range from Persia and Pericles to Julius Caesar and the Goths, and from mass foreign invasion to street fighting and counterinsurgency."—Paul Cartledge, author of Alexander the Great

"Though the technology has changed, the nature of war and strategy has remained constant over the chasm of the centuries and millennia. This book makes the ancient Greeks and Romans relevant to our modern conflicts in Iraq and Afghanistan. Scholars will find much to argue about in these lively essays; lay readers much to be fascinated with."—Robert D. Kaplan, author of Warrior Politics: Why Leadership Demands a Pagan Ethos

"An outstanding book—the contributions are all clear and interesting, and should be of great interest not only to scholars, but to the general public, which continues to be fascinated by ancient history."—Williamson Murray, Ohio State University

"This book will be welcomed by anyone interested in the ancient military strategies employed to conquer, pacify, and govern, and in the ways those strategies remain relevant to the contemporary world."—Loren J. Samons II, Boston University