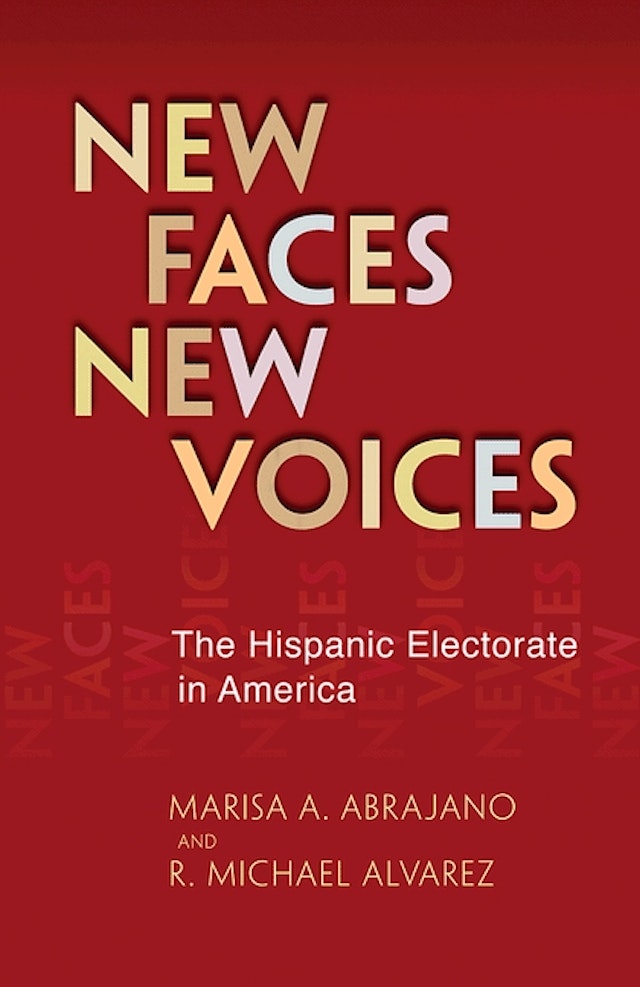 Making up 14.2 percent of the American population, Hispanics are now the largest minority group in the United States. Clearly, securing the Hispanic vote is more important to political parties than ever before. Yet, despite the current size of the Hispanic population, is there a clear Hispanic politics? Who are Hispanic voters? What are their political preferences and attitudes, and why? The first comprehensive study of Hispanic voters in the United States, New Faces, New Voices paints a complex portrait of this diverse and growing population.


Examining race, politics, and comparative political behavior, Marisa Abrajano and R. Michael Alvarez counter the preconceived notion of Hispanic voters as one homogenous group. The authors discuss the concept of Hispanic political identity, taking into account the ethnic, generational, and linguistic distinctions within the Hispanic population. They compare Hispanic registration, turnout, and participation to those of non-Hispanics, consider the socioeconomic factors contributing to Hispanics’ levels of political knowledge, determine what segment of the Hispanic population votes in federal elections, and explore the prospects for political relationships among Hispanics and non-Hispanics. Finally, the authors look at Hispanic opinions on social and economic issues, factoring in whether these attitudes are affected by generational status and ethnicity.


A unique and nuanced perspective on the Hispanic electoral population, New Faces, New Voices is essential for understanding the political characteristics of the largest and fastest growing group of minority voters in the United States.

Marisa A. Abrajano is associate professor of political science at the University of California, San Diego. She is the author of Campaigning to the New American Electorate.
R. Michael Alvarez is professor of political science at the California Institute of Technology. He is the coauthor of Electronic Elections and Hard Choices, Easy Answers (both Princeton).

"New Faces, New Voices successfully gives voice to the new Hispanic voter and clearly illustrates the importance of a diverse and growing population. The book is an invaluable addition to both ethnic studies and political behavior literature."—Choice

"New Faces, New Voices offers a great deal of analysis in a relatively small package. Consequently, it will serve as a resource for upper-division classes in Latino politics, race and ethnic politics, and US. Political behavior."—Louis De Sipio, American Review of Politics

"Because of the quality of the research presented in this book, it can be recommended as an innovative approach to studying Hispanic voting behavior in the United States. It also sheds light on the complexity of this issue and on new ways of studying ethnic political behavior."—Ksenia Krauer-Pacheco, CEU Political Science Journal

"This innovative book deals with a large and understudied area: Latino political behavior. Its argument regarding the diversity of the Latino community is important and the authors' attention to generational differences in the community is a rarity. Significant and original, this book covers more ground than any other work on the subject."—Lisa García Bedolla, University of California, Berkeley

"Books examining aspects of Latino political behavior are sparse—this one fills that void. The authors succeed in adding to our knowledge on the subject and they do so in a very organized and easy-to-understand fashion."—Paula D. McClain, Duke University