A compelling history of the early modern Jewish experience 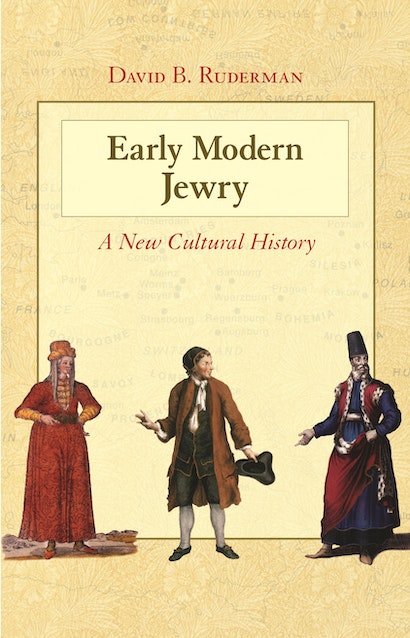 Early Modern Jewry boldly offers a new history of the early modern Jewish experience. From Krakow and Venice to Amsterdam and Smyrna, David Ruderman examines the historical and cultural factors unique to Jewish communities throughout Europe, and how these distinctions played out amidst the rest of society. Looking at how Jewish settlements in the early modern period were linked to one another in fascinating ways, he shows how Jews were communicating with each other and were more aware of their economic, social, and religious connections than ever before.

Ruderman explores five crucial and powerful characteristics uniting Jewish communities: a mobility leading to enhanced contacts between Jews of differing backgrounds, traditions, and languages, as well as between Jews and non-Jews; a heightened sense of communal cohesion throughout all Jewish settlements that revealed the rising power of lay oligarchies; a knowledge explosion brought about by the printing press, the growing interest in Jewish books by Christian readers, an expanded curriculum of Jewish learning, and the entrance of Jewish elites into universities; a crisis of rabbinic authority expressed through active messianism, mystical prophecy, radical enthusiasm, and heresy; and the blurring of religious identities, impacting such groups as conversos, Sabbateans, individual converts to Christianity, and Christian Hebraists.

David B. Ruderman is the Joseph Meyerhoff Professor of Modern Jewish History and the Ella Darivoff Director of the Herbert D. Katz Center for Advanced Judaic Studies at the University of Pennsylvania. His many books include Jewish Enlightenment in an English Key and Connecting the Covenants.

"Ruderman's provocative thesis marks a scholarly watershed. It reopens and complicates the question of when modern Jewish history began, and suggests that far-reaching but underappreciated trends analogous to those traced in this book have already inaugurated a postmodern era of Jewish history."—Lawrence Grossman, Forward

"David B. Ruderman plunges into one of the central debates in the writing of Jewish history. . . . When we think of the history of Europe, it is in terms derived from the experience of Christians and Christianity. . . . But does this familiar timeline apply to the history of the Jews? . . . Early Modern Jewry will certainly help to shape future debates over the ways we write and interpret Jewish history."—Adam Kirsch, Tablet Magazine

"Ruderman's learned and fluently written book presents a thought-provoking interpretation of the period beginning with the Spanish expulsion of 1492, which set into motion the extraordinary communities of Iberian Jewry—and much else besides—and stretching forward to the onset of modernity."—Yehudah Mirsky, Jewish Ideas Daily

"Ruderman has given readers fascinated by Jewish history much material upon which to ponder."—Benjamin Ivry, Forward

"David Ruderman . . . provides a masterful synthesis of the vast scholarship of the past 30 years. . . . This book is an important addition to any university library."—Harvey Sukenic, AJL Newsletter

"David Ruderman has produced an admirable synthesis of the latest research on early modem Jewish history, while offering a cogent assessment of the historiography of the term 'early modern' and of the role of Jews in European and world history between the medieval and modem eras. The clear structure and approachable writing of Early Modern Jewry make it an excellent resource."—Gayle K. Brunelle, Canadian Journal of History

"[T]he book greatly advances scholarship toward a more holistic, multidisciplinary approach to Jewish history during this very dynamic epoch. . . . His work is a great introductory monograph for students and emerging scholars in early modern Jewish studies, providing an excellent foundation of knowledge to build upon for future research."—Barry Stiefel, Sixteenth Century Journal

"Ruderman's scholarship is of the highest order and shows impeccable control over a huge and diverse secondary literature. He is able to convey the nature of the historical debates over the key issues in this period with clarity and integrity, and each chapter is a model of argumentation. This book will be indispensable to anyone who studies the Jewish experience."—Gershon Hundert, McGill University

"This is an entirely original book that for the first time offers a sustained and persuasive argument for a distinct early modern period in Jewish history. Ruderman provides a synthetic account of the period based on a masterful command of the primary and secondary scholarship."—David Sorkin, University of Wisconsin-Madison