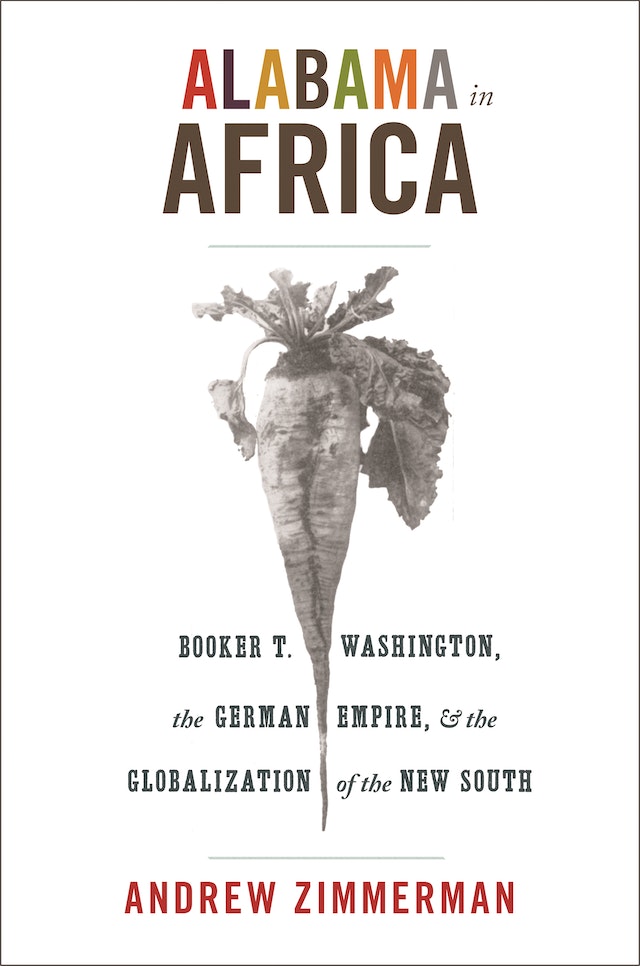 In 1901, the Tuskegee Institute, founded by Booker T. Washington, sent an expedition to the German colony of Togo in West Africa, with the purpose of transforming the region into a cotton economy similar to that of the post-Reconstruction American South. Alabama in Africa explores the politics of labor, sexuality, and race behind this endeavor, and the economic, political, and intellectual links connecting Germany, Africa, and the southern United States. The cross-fertilization of histories and practices led to the emergence of a global South, reproduced social inequities on both sides of the Atlantic, and pushed the American South and the German Empire to the forefront of modern colonialism.


Zimmerman shows how the people of Togo, rather than serving as a blank slate for American and German ideologies, helped shape their region’s place in the global South. He looks at the forms of resistance pioneered by African American freedpeople, Polish migrant laborers, African cotton cultivators, and other groups exploited by, but never passive victims of, the growing colonial political economy. Zimmerman reconstructs the social science of the global South formulated by such thinkers as Max Weber and W.E.B. Du Bois, and reveals how their theories continue to define contemporary race, class, and culture.


Tracking the intertwined histories of Europe, Africa, and the Americas at the turn of the century, Alabama in Africa shows how the politics and economics of the segregated American South significantly reshaped other areas of the world.

Andrew Zimmerman is professor of history at George Washington University and the author of Anthropology and Antihumanism in Imperial Germany.

"This book . . . is incontestably a major contribution. It demonstrates decisively the value of the vanguard trend that is the internationalizing of the African-American experience."—Gerald Horne, Journal of American History

"[A]n impressively conceptualized and rigorously researched work that has the potential to be a paradigm shifter for historians of race, work, power, and ideas."—Alison Clark Efford, Journal of the Gilded Age and Progressive Era

"The chapters begin with useful introductory paragraphs and end with concise concluding thoughts that allow the reader to pause and reflect on the rich evidence and sophisticated analysis that Zimmerman offers. Alabama in Africa is also thoroughly and beautifully illustrated with useful maps and wonderfully detailed photographs. These are particularly helpful in a work of this kind that moves from continent to continent and in which many readers might encounter somewhat unfamiliar regions and story lines. Recommended for scholars, graduate students, and advanced undergraduates, Alabama in Africa is a sterling example of transnational history at its finest."—Robert T. Vinson, Labor

"Zimmerman's important new book brings a fresh perspective to the historiography of cotton and colonialism, upending much of it in innovative and compelling ways. He writes with the perspective of a European intellectual and political historian, but is firmly grounded in nineteenth- and early twentieth-century U.S. history."—Benjamin Lawrance, H-Net Review-West-Africa

"Andrew Zimmerman has recovered an important but overlooked aspect of colonial history, and he tells his story with much verve. He succeeds most admirably in his broader aim of illuminating larger historical processes with seemingly minor events and bridging historiographical traditions."—Erik Grimmer-Solem, Enterprise and Society

"Andrew Zimmerman's Alabama in Africa is an ambitious and outstanding book. The author has thought deeply about a large subject, explains his ideas forcefully, and bases his thesis in staggering research. His efforts have resulted in a valuable contribution to the history of three continents linked, as the author has shown, more closely than many historians have realized. . . . Scholars interested in the symbiotic relationship between the southern United States, Germany, and West Africa during the Progressive era will find Zimmerman's study of great worth, one that answers as well as provokes new questions concerning the international impact of the American South."—James S. Humphreys, Canadian Journal of History

"Zimmerman analyzes an exhaustive amount of archival, published primary, and secondary sources to shape his narrative. This excellent transnational history will be of interest to scholars of the Atlantic World, the United States, Germany, and Africa."—Jeannette Eileen Jones, American Historical Review

"Alabama in Africa is a remarkable book. Zimmerman shows how local and regional history is inevitably linked to global history, and he reminds us that we cannot begin to understand one without the other. There is far more to this book than can be discussed in the allowed space. All fields of scholarship will benefit from reading this wonderful book."—Nan E. Woodruff, Diplomatic History

"Alabama in Africa is a remarkably rich work of transnational scholarship, one that will make lasting contributions to German, African, African American, and southern history. Thanks to this groundbreaking book, historians will see the profound and widespread impact of the New South's 'freedoms' in entirely new ways."—Mark R. Finlay, Journal of Southern History

"This is in many ways a brilliant book. It is pathbreaking in its tracing of the intellectual roots, economics, and politics of transnational links that transformed the global South. Particularly significant is the fact that Zimmerman reveals how Booker T. Washington, W. E. B. Du Bois, and Tuskegee scientists and colonists played active roles in this tricontinental undertaking."—Douglas Henry Daniels, Journal of World History

"More than an exemplary study of colonial globalization, Alabama in Africa holds out the proposition to understand blacks neither as its objects, nor as its opponents, but also its agents."—Elisabeth Engel, Books&ideas.net

"As someone who coincidentally taught a course on African-American history for the first time during the fall of 2012 while reading Alabama in Africa, I found Zimmerman's reassessment of the contributions to U.S. relations with Africa at the turn of the twentieth century by Booker T. Washington and W.E.B. DuBois to be helpful and enlightening."—Andy DeRoche, H-Diplo Roundtable Reviews

"Alabama in Africa is an uncommonly ambitious and broadly conceived work. It is a compelling fusion of micro and transnational history. . . . With enviable erudition in disparate historiographies and exceptional clarity of exposition, Zimmerman reveals connections, traces influences, and assigns consequences amidst the swirling events on three continents during a period of furious transformation. His accomplishments as a prose craftsmen and researcher are impressive, and, I hope, will inspire subsequent scholars to attempt similar works."—W. Fitzhugh Brundage, H-Diplo Roundtable Reviews

"Alabama in Africa is a truly remarkable achievement, one of the most powerful and illuminating works to emerge so far in the effort to recast historical thinking beyond national scales. . . . Elegantly wrought, subtly argued and carefully researched, it is a model of global history writing that provides one of the most convincing histories available of the forging of racialized power in the modern world."—Paul A. Kramer, H-Diplo Roundtable Reviews

"Zimmerman's meticulously researched book displays the best this scholarship has to offer. . . . Andrew Zimmerman has achieved a remarkable feat that advocates of transnational and comparative history might only dream of. The deep archival research leaves no stone unturned and the argument is exceedingly persuasive. The multi-layered complexity and nearly impenetrable nature of the narrative may simply reflect the price one pays for a successful transnational history."—Natalie J. Ring, H-Diplo Roundtable Reviews

"Alabama in Africa, with its focus on the particular moment of the synthesis of 'three of the most powerful forces in the Atlantic world—German social science, African cash cropping, and the racial political economy of the New South' is a paradigmatic case study in the transnational dimensions of U.S. American, German, and African histories. The book fully succeeds in exposing, in the words of the author's own conclusion, the implications and power of 'transnational networks of capital, social science, racial ideologies, and empire.'"—Udo J. Hebel, American Studies Journal

"Zimmerman has made a valuable contribution to the fields of transnational and imperial history. Drawing together multiple and disparate narrative strands, he deftly weaves a compelling story about the importance of the migration of ideas about race, labor, and education. Of equal importance, Zimmerman provides a useful roadmap for historians seeking to broaden the horizons of the past."—Sarah Steinbock-Pratt, H-Net Reviews

"This conceptually sophisticated, empirically rich, and genuinely transnational book mines sources on three different continents and exposes a dense network of connections and comparisons. It makes original contributions to German, American, and African history, as well as to the history of the social sciences."—James T. Campbell, author of Middle Passages: African American Journeys to Africa

"Zimmerman's compelling and beautifully executed book is an innovative tracking of the interrelations among free labor, race, and social science, linking Germany, Africa, and the United States. This is a groundbreaking book, one that will have a major impact."—Geoff Eley, University of Michigan

"Zimmerman has written a superb book about the transfer of knowledge from North America to Germany to West Africa. He has written an Atlantic history that connects East Prussia, Togo, and the American South. Zimmerman writes insightfully about economics, social relations, and the origins of sociology. This is a model of the new global history."—Eric D. Weitz, University of Minnesota