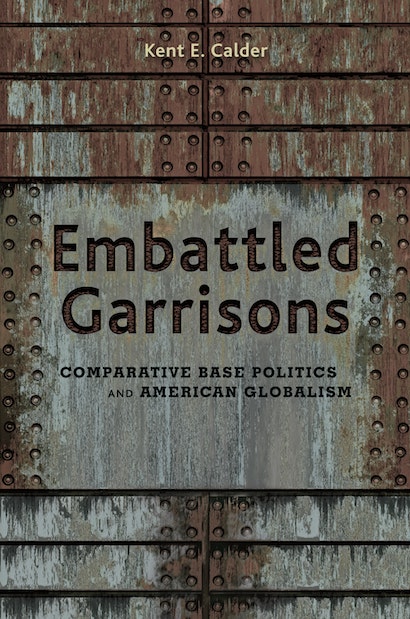 The overseas basing of troops has been a central pillar of American military strategy since World War II — and a controversial one. Are these bases truly essential to protecting the United States at home and securing its interests abroad — for example in the Middle East-or do they needlessly provoke anti-Americanism and entangle us in the domestic woes of host countries? Embattled Garrisons takes up this question and examines the strategic, political, and social forces that will determine the future of American overseas basing in key regions around the world.


Kent Calder traces the history of overseas bases from their beginnings in World War II through the cold war to the present day, comparing the different challenges the United States, Britain, France, and the Soviet Union have confronted. Providing the broad historical and comparative context needed to understand what is at stake in overseas basing, Calder gives detailed case studies of American bases in Japan, Italy, Turkey, the Philippines, Spain, South Korea, the Balkans, Afghanistan, and Iraq. He highlights the vulnerability of American bases to political shifts in their host nations — in emerging democracies especially — but finds that an American presence can generally be tolerated when identified with political liberation rather than imperial succession.

Embattled Garrisons shows how the origins of basing relationships crucially shape long-term prospects for success, and it offers a means to assess America’s prospects for a sustained global presence in the future.

Kent E. Calder is director of the Reischauer Center for East Asian Studies at the Johns Hopkins University School for Advanced International Studies, a faculty member at the university's Paul H. Nitze School of Advanced International Studies in Washington, D.C., and served as special adviser to the U.S. ambassador to Japan from 1997 to 2001. His books include Pacific Defense: Arms, Energy, and America's Future in Asia (William Morrow), Strategic Capitalism (Princeton), and Crisis and Compensation (Princeton).

"The United States' military dominance is built on a worldwide system of bases. This important book provides a much-needed survey of the history and politics of these 'global guardians.'...Calder's argument suggests that the U.S. system of bases has generally played a stabilizing role and worked to the advantage of all parties. But the amount of political support for these far-flung security partnerships varies widely—and Calder's chief concern is to identify the factors that generate stability and those that create conflict."—G. John Ikenberry, Foreign Affairs

"Calder's conclusions are derived from and supported by the logic and evidence he marshaled for this study. Embattled Garrisons will appeal to historians, military planners, and specialists in international relations and should be required reading in both the departments of State and Defense."—Mark J. Conversino, Journal of Military History

"Embattled Garrisons is a useful source book on American military history as far as U.S. foreign policy regarding overseas bases is concerned. It also provides an informative glimpse at the ways in which American expansionism is legitimized."—Selin M. Bolme, Insight Turkey

"Embattled Garrisons is an extremely valuable book that provides readers with a variety of angles with which to examine base politics. This is a must-read for scholars interested in interactions between the host nation and the basing nation, as well as policymakers who are keen on sustaining a US presence around the globe in the future."—Takafumi Ohtomo, International Relations of the Asia-Pacific

"At a time when American global military commitments have expanded enormously, Kent Calder offers a cogent and insightful analysis of the ways that overseas basing shape the relationships between the United States and its friends and allies. This book provides a critical context for understanding how America meets its new commitments and challenges."—Francis Fukuyama, Johns Hopkins University

"This is a solid book that does a nice job with a number of aspects of bases—historical, economic, military, strategic. Calder has worked on enough of these various aspects to have a good feel for them, and it shows. His work is balanced, sophisticated, and policy-relevant. He provides just the right level of detail—enough to make his argument cogently and robustly."—Michael O'Hanlon, Brookings Institution

"A first-class piece of work. Calder is very convincing in demonstrating that base politics play a significant role in the relations between the United States and the nations that host American bases. His case studies are full of interesting and often unfamiliar aspects of U.S. foreign relations, in many instances regarding the stresses that often arise from the presence of an American base in a foreign country."—Michael Klare, Hampshire College