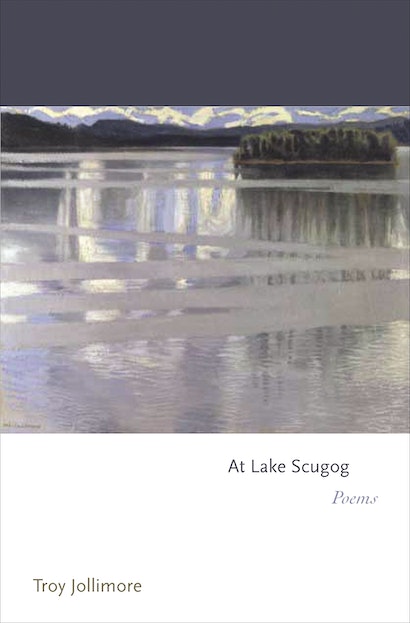 This is an eagerly awaited collection of new poems from the author of Tom Thomson in Purgatory, which won the National Book Critics Circle Award and was hailed by the New York Times as a “snappy, entertaining book.” A triumphant follow-up to that acclaimed debut, At Lake Scugog demonstrates why the San Francisco Chronicle has called Troy Jollimore “a new and exciting voice in American poetry.”


Jollimore is a professional philosopher, and in witty and profound ways his formally playful poems dramatize philosophical subjects — especially the individual’s relation to the larger world, and the permeable, constantly shifting border between “inner” and “outer.” For instance, the speaker of “The Solipsist,” suspecting that the entire world “lives inside of your skull,” wonders “why / God would make ear and eye / to face outward, not in.” And Tom Thomson — a character who also appeared in Jollimore’s first book — finds himself journeying like an astronaut through the far reaches of the space that fills his head, an experience that prompts him to ask that a doorbell be installed “on the inside,” so that he can warn the world before “intruding on’t.”
______

From At Lake Scugog:
LOBSTERS


tend to cluster in prime numbers, sub-
oceanic bundles of bug consciousness
submerged in waking slumber, plunged in pits
of murk-black water. They have coalesced


out of the pitch and grime and salt suspended
within that atmospheric gloom. Their skin
is colorless below. But when exposed
to air, they start to radiate bright green,


then, soon, a siren red that wails: I’m dead.
The meat inside, though, is as white as teeth,
or the hard-boiled egg that comes to mind
when one cracks that crisp shell and digs beneath.


Caress the toothy claw-edge of its pincer
and you will know the single, simple thought
that populates its mind. The lobster trap is elegance
itself: one moving part: the thing that’s caught.

Troy Jollimore's first book of poetry, Tom Thomson in Purgatory, won the 2006 National Book Critics Circle Award. His poems have appeared in the New Yorker, McSweeney's, and The Believer, among other publications. He teaches philosophy at California State University, Chico.

"This sophomore effort mostly continues in the first book's nervous, witty, self-conscious, and at time self-despising modes. . . . Pantoun, epigram, terza rima, puns, and invented forms with new rhyming requirements make much of the volume a pleasure in terms of technique. . . . Altogether different and hard to forget are poems on which Jollimore concludes: stern, vulnerable, lyrical reactions to environmental peril."—Publishers Weekly

"In this second outing by 2006's National Book Critics Circle Award winner (for Tom Thomson in Purgatory), the poet considers age-old but vexing philosophical dualities: appearance vs. reality, mind vs. body, belief vs. knowledge. Given his day job as a philosophy professor, these aren't surprising subjects; what surprises is the deftness with which he handles them, conjuring great American songbook lyricists ('Don't be misled:/ that sea-song you hear/ when the shell's at your ear?/ It's all in your head') more readily than Descartes or Heidegger. . . . Seriously playful ('no screw-up goes unscrew-/ tinized') or playfully serious ('no man's an iPod'), Jollimore adds buoyancy to weighty human dilemmas without trivializing or distancing them. An engaging collection."—Library Journal

"Troy Jollimore, a philosophy prof at Chico State, won a National Book Critics Circle prize with his first poetry collection; his second, At Lake Scugog, is easily that good. In lush language draped over familiar forms, Jollimore explores the nature of the self, but don't let that frighten you off. He's got a great sense of humor and an equal fondness for a pun and a laugh, as in Tom Thomson in Tune": "no man's an iPod." Take that, John Donne!"—Kel Munger, Sacramento News & Review

"Fans of Tom Thompson in Purgatory as well as new readers will delight in a fresh batch of Tom Thompson sonnets, as well as a trove of new work whose ingenious play with form and notions of selfhood is not to be missed. . . . It can't be overstated—he isn't overrated."—Jennifer Sperry Steinorth, ForeWord Reviews

"[W]hat makes the book exceptional is the way it embodies a style of language and thought only a philosopher could deploy so effortlessly."—John Koethe, Philosophers' Magazine