What is ethics? Where do moral standards come from? Are they based on emotions, reason, or some innate sense of right and wrong? For many scientists, the key lies entirely in biology — especially in Darwinian theories of evolution and self-preservation. But if evolution is a struggle for survival, why are we still capable of altruism?


In his classic study The Expanding Circle, Peter Singer argues that altruism began as a genetically based drive to protect one’s kin and community members but has developed into a consciously chosen ethic with an expanding circle of moral concern. Drawing on philosophy and evolutionary psychology, he demonstrates that human ethics cannot be explained by biology alone. Rather, it is our capacity for reasoning that makes moral progress possible. In a new afterword, Singer takes stock of his argument in light of recent research on the evolution of morality.

Peter Singer is the Ira W. DeCamp Professor of Bioethics in the University Center for Human Values at Princeton University and Laureate Professor at the University of Melbourne. His books include Animal Liberation, Practical Ethics, Rethinking Life and Death, One World, and, most recently, The Life You Can Save. 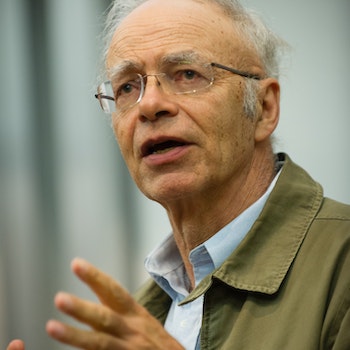 "Singer's theory of the expanding circle remains an enormously insightful concept, which reconciles the existence of human nature with political and moral progress. It was also way ahead of its time. . . . It's wonderful to see this insightful book made available to a new generation of readers and scholars."—Steven Pinker, author of The Blank Slate and The Stuff of Thought

"The Expanding Circle is a brilliant book whose significance becomes clearer every year. Peter Singer was the first major philosopher to see the importance of the new Darwinian insights into human nature, and in this book he applies them with characteristic power and grace."—Robert Wright, author of The Moral Animal

"The Expanding Circle is a great introduction to the whole question of the relationship between evolution and ethics. Looking at it now nearly 30 years after its original publication, I am amazed at how well it has withstood the test of time. This book remains as relevant as ever."—Michael Ruse, editor of Philosophy after Darwin

"Since its first publication in 1981, The Expanding Circle has become one of the most widely influential books in ethics. This revised edition could not be more timely. It is vital reading for anyone who has ever wondered about the nature or objectivity of morality—which is to say, for all of us."—Peter Railton, University of Michigan