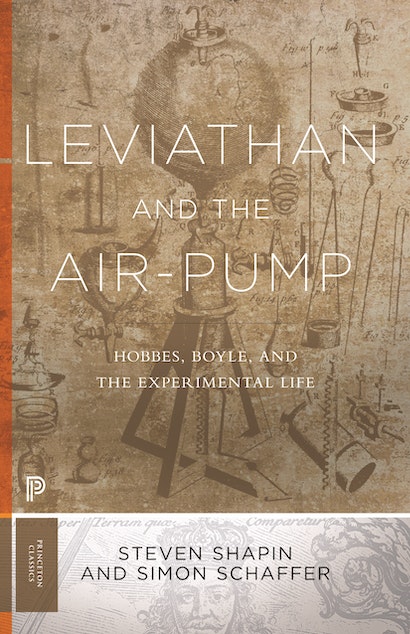 Leviathan and the Air-Pump examines the conflicts over the value and propriety of experimental methods between two major seventeenth-century thinkers: Thomas Hobbes, author of the political treatise Leviathan and vehement critic of systematic experimentation in natural philosophy, and Robert Boyle, mechanical philosopher and owner of the newly invented air-pump. The issues at stake in their disputes ranged from the physical integrity of the air-pump to the intellectual integrity of the knowledge it might yield. Both Boyle and Hobbes were looking for ways of establishing knowledge that did not decay into ad hominem attacks and political division. Boyle proposed the experiment as cure. He argued that facts should be manufactured by machines like the air-pump so that gentlemen could witness the experiments and produce knowledge that everyone agreed on. Hobbes, by contrast, looked for natural law and viewed experiments as the artificial, unreliable products of an exclusive guild.


The new approaches taken in Leviathan and the Air-Pump have been enormously influential on historical studies of science. Shapin and Schaffer found a moment of scientific revolution and showed how key scientific givens — facts, interpretations, experiment, truth — were fundamental to a new political order. Shapin and Schaffer were also innovative in their ethnographic approach. Attempting to understand the work habits, rituals, and social structures of a remote, unfamiliar group, they argued that politics were tied up in what scientists did, rather than what they said. Steven Shapin and Simon Schaffer use the confrontation between Hobbes and Boyle as a way of understanding what was at stake in the early history of scientific experimentation. They describe the protagonists’ divergent views of natural knowledge, and situate the Hobbes-Boyle disputes within contemporary debates over the role of intellectuals in public life and the problems of social order and assent in Restoration England. In a new introduction, the authors describe how science and its social context were understood when this book was first published, and how the study of the history of science has changed since then.

Steven Shapin is the Franklin L. Ford Professor of the History of Science at Harvard University. Simon Schaffer is professor of history of science at the University of Cambridge.

"Shapin and Schaffer work out the implications of these debates [between Hobbes and Boyle] for the history of science with great skill of interpretation and exposition. They use their findings and their analysis to give an explanation of the experimental enterprise in general, which, although it is not philosophical in nature, always takes philosophy most seriously. This is simply one of the most original, enjoyable and important books published in the history of science in recent years."—Owen Hannaway, Technology and Culture

"If any proof of the intellectual buoyancy or intrinsic worth of the history and philosophy for science was needed, nothing better could be provided than this study by Steven Shapin and Simon Schaffer. . . . Their findings suggest the futility of wrenching science from its ideological context, and not only with respect to the seventeenth century; they also detect parallels with the crisis of confidence affecting contemporary science."—Charles Webster, The Times Literary Supplement

"Praise for Princeton's previous editions: "Steven Shapin and Simon Schaffer have ventured beyond ordinary history of science or history of ideas to produce a novel 'exercise in the sociology of scientific knowledge.' . . . a historical study rich in new interpretations and notable for the use of sources of a kind not hitherto fully exploited by scholars.""—Clive Holmes, American Historical Review

"[T]he most influential text in our field since Thomas Kuhn'sStructure of Scientific Revolutions."—James Secord, Isis

"This is simply one of the most original, enjoyable, and important books published in the history of science in recent years."—Owen Hannaway, Technology and Culture

"[A]n unparalleled vignette of the birth pangs of a new style of reasoning."—Ian Hacking, British Journal for the History of Science

"There is every reason to regard this as one of the most important achievements in science studies in the late twentieth century."—John H. Zammito, author of, A Nice Derangement of Epistemes

"One of the most influential books in the modern history of science."—Melinda Baldwin, Physics Today