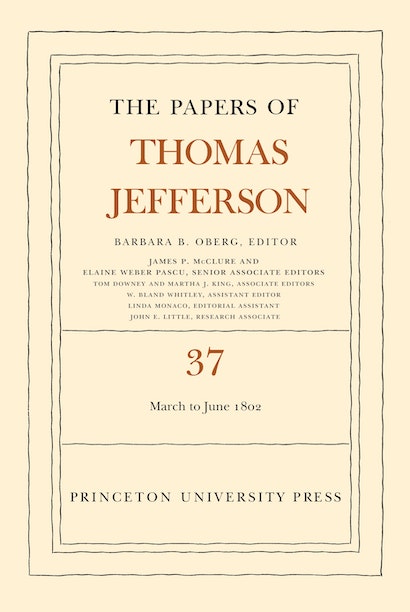 This volume opens on 4 March 1802, the first anniversary of Thomas Jefferson’s inauguration as the nation’s third president, and closes on 30 June. In March, a delegation of Seneca Indians comes to Washington to discuss their tribe’s concerns, and Jefferson names a commissioner to handle a land sale by Oneida Indians to the state of New York. In April, the Senate ratifies a treaty with the Choctaw nation for a wagon road across their lands. Jefferson worries about an increasingly dictatorial France taking back control of New Orleans, prompting him to the intemperate remark that he would “marry” America’s fortunes to the British fleet. Charles Willson Peale sends him sketches of the skull of a prehistoric bison found in Kentucky. During the closing, and very frustrating, weeks of Congress, he distracts himself with a cipher devised by Robert Patterson. He prepares lists of books to be purchased for the recently established Library of Congress and also obtains many titles for his own collection. Even while he is in Washington occupied with matters of state, Jefferson has been keeping close watch on the renovations at Monticello. In May, he has Antonio Giannini plant several varieties of grapes in the southwest vineyard, and he orders groceries, molasses, dry Lisbon wine, and cider to be shipped to Monticello in time for his arrival. He looks forward “with impatience” to the moment he can embrace his family once more.