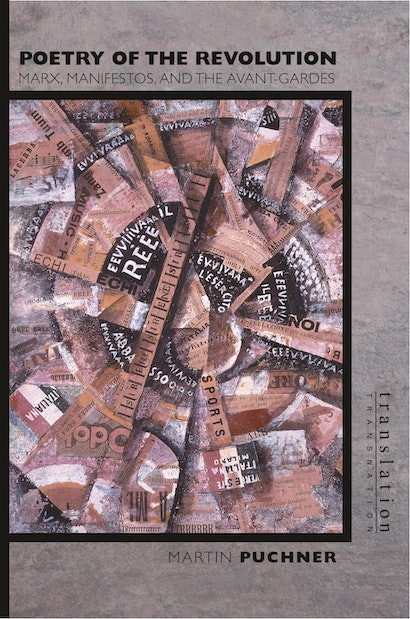 Poetry of the Revolution tells the story of political and artistic upheavals through the manifestos of the nineteenth and twentieth centuries. Ranging from the Communist Manifesto to the manifestos of the 1960s and beyond, it highlights the varied alliances and rivalries between socialism and repeated waves of avant-garde art. Martin Puchner argues that the manifesto — what Marx called the “poetry” of the revolution — was the genre through which modern culture articulated its revolutionary ambitions and desires. When it intruded into the sphere of art, the manifesto created an art in its own image: shrill and aggressive, political and polemical. The result was “manifesto art” — combinations of manifesto and art that fundamentally transformed the artistic landscape of the twentieth century.


Central to modern politics and art, the manifesto also measures the geography of modernity. The translations, editions, and adaptations of such texts as the Communist Manifesto and the Futurist Manifesto registered and advanced the spread of revolutionary modernity and of avant-garde movements across Europe and to the Americas. The rapid diffusion of these manifestos was made “possible by networks — such as the successive socialist internationals and international avant-garde movements — that connected Santiago and Zurich, Moscow and New York, London and Mexico City. Poetry of the Revolution thus provides the point of departure for a truly global analysis of modernism and modernity.

Martin Puchner, is Associate Professor of English and Comparative Literature at Columbia University and author of Stage Fright: Modernism, Anti-Theatricality, and Drama. He is coeditor of Against Theatre: Creative Destructions on the Modernist Stage (2006), and The Norton Anthology of Drama (forthcoming).

"[A] bold venture into relatively unexplored terrain. Poetry of the Revolution is an intelligent and informative work, offering by far the best survey of its subject now available."—Kheya Bag, New Left Review

"From Marx and Engels' Communist Manifesto down to the avant-garde theatre of the present, the manifesto is, as Martin Puchner demonstrates in this dazzling, brilliantly original, and deeply learned book, 'an act of self-foundation and self-creation,' unique in its exhortation to action, not by means of lofty principles but through its artistic form. In its fusion of the political and the poetic as they coexist in twentieth-century movements from Futurism to Situationism, Poetry of the Revolution is one of the few indispensable studies of the avant-garde. In a very crowded field, it stands out, quite simply, as a classic."—Marjorie Perloff, author of The Futurist Moment and The Vienna Paradox

"Martin Puchner navigates masterfully through the complex interactions between political and aesthetic manifestos. His account of the past, however, is also a call to renew and continue the work of manifestos in the future."—Michael Hardt, coauthor of Empire and Multitude

"Poetry of the Revolution is remarkable for its breadth of scholarship and its poised, authoritative style. It will stand for a long time as an authoritative history and elegant reinterpretation of the manifesto form. Few scholars have sustained a close and equal attention to the historical and formal trajectories of both the political manifesto and the aesthetic manifesto. Puchner does so with great scholarly brio, not only tracing the afterlife of the Communist Manifesto as a world text and a generic pioneer, but also bringing his considerable learning to bear on the forms and fates of a great number of avant-garde manifestos, from 1909 to 1999."—Jed Esty, University of Illinois, Urbana-Champaign, author of A Shrinking Island: Modernism and National Culture in England

"Martin Puchner has written a finely detailed, comparative, and well-researched history of the art manifesto in the twentieth century. Poetry of the Revolution makes an important contribution to our understanding of the place of the manifesto in modern culture, and it will be of considerable use not only to students of modern literature but also to students of twentieth-century art more generally."—Vincent Pecora, University of California, Los Angeles, author of Nations and Identities