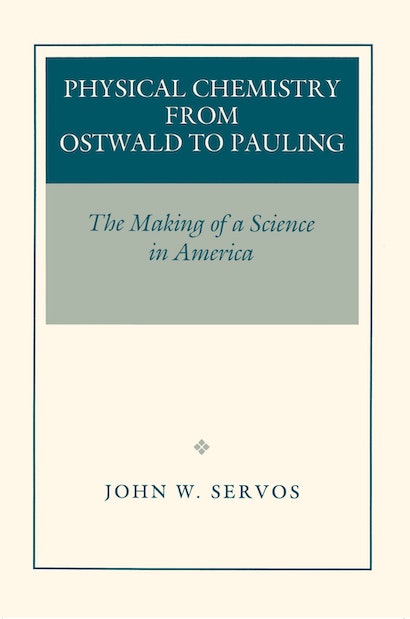 John Servos explains the emergence of physical chemistry in America by presenting a series of lively portraits of such pivotal figures as Wilhelm Ostwald, A. A. Noyes, G. N. Lewis, and Linus Pauling, and of key institutions, including MIT, the University of California at Berkeley, and Caltech. In the early twentieth century, physical chemistry was a new hybrid science, the molecular biology of its time. The names of its progenitors were familiar to everyone who was scientifically literate; studies of aqueous solutions and of chemical thermodynamics had transformed scientific knowledge of chemical affinity. By exploring the relationship of the discipline to industry and to other sciences, and by tracing the research of its leading American practitioners, Servos shows how physical chemistry was eclipsed by its own offspring — specialties like quantum chemistry.

John W. Servos is Professor of History at Amherst College.

"In his careful accounting of the emergence of a new discipline at the boundaries between chemistry and physics, and of the upheaval that it wrought throughout chemistry, Servos has made his own contribution to reform, and for that reason his book deserves wide attention.... [He] illustrate[s] the fact that science is, above all, a human enterprise, shaped by personalities, communities, and institutions, as well as ideas."—Robert Friedel, Science

"Servos has shed considerable light on a key issue, the formation of new scientific disciplines, by his penetrating analysis of the rise of physical chemistry in America.... I cannot recall any other recent book in this field that has managed to combine such high standards of verbal clarity, smoothness of narrative, and sheer elegance, with intellectual rigor and extensive archival research."—Peter Morris, History of Science