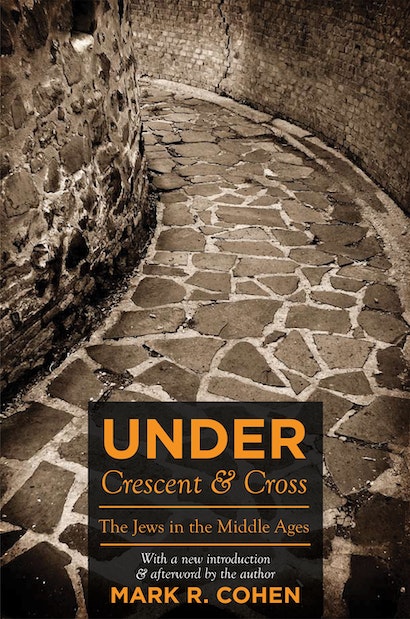 Did Muslims and Jews in the Middle Ages cohabit in a peaceful “interfaith utopia”? Or were Jews under Muslim rule persecuted, much as they were in Christian lands? Rejecting both polemically charged ideas as myths, Mark Cohen offers a systematic comparison of Jewish life in medieval Islam and Christendom — and the first in-depth explanation of why medieval Islamic-Jewish relations, though not utopic, were less confrontational and violent than those between Christians and Jews in the West.

Under Crescent and Cross has been translated into Turkish, Hebrew, German, Arabic, French, and Spanish, and its historic message continues to be relevant across continents and time. This updated edition, which contains an important new introduction and afterword by the author, serves as a great companion to the original.

Mark R. Cohen is professor of Near Eastern studies at Princeton University. His books include Jewish Self-Government in Medieval Egypt, The Autobiography of a Seventeenth-Century Venetian Rabbi, and Poverty and Charity in the Jewish Community of Medieval Egypt (Princeton).

"Cohen's concern in this important new book is with a historiographically far more interesting and useful question [than the debate over the Jewish experiences in the medieval worlds of Christendom and Islam]: why the difference? . . . Cohen's argument is buttressed with an impressive range of evidence drawn from both Jewish and non-Jewish sources in the Islamic and Christian worlds."—David Wasserstein, The Times Literary Supplement

"Cohen advances our knowledge through a fine treatment of the huge literature and the application of social anthropological theory. Scholars will welcome the sound synthesis; general readers will appreciate the lucid style."—Library Journal

"[Cohen's] systematic, comparative approach . . . makes this a useful book for courses in general medieval history and Jewish history. Cohen presents the differences between the history of Jewish life under Edom [Christianity] and Ishmael [Islam] in a lucid and comprehensive manner."—Stephen D. Beinin, American Historical Review

"Cohen's is a polemical text in the best sense of the word: it tries to open debate, not stifle it, and asks questions where they are traditionally shouted away. . . . A reassuringly balanced and judicious assessment of Jewish life in the Middle Ages."—Andre A. Aciman, New York Newsday

"On the whole, given the complexity of the issues and the long history of the debate about them, Cohen's fresh approach . . . is welcome, and anyone interested in the subject in the future will find it necessary to refer to this important work."—William M. Brinner, Medieval Encounters

"Mark R. Cohen has crafted a work that is fascinating in detail and provocative in analysis."—Frederic Krome, Speculum

"The re-printing of this book with a new introduction and afterword by the author could not come at a better time. . . . Survivors of the Holocaust have left a long and detailed accounting of their suffering which has been added to the collective memory. Unfortunately, it would appear that this memory has transcended history, which is an excellent reason to read Mark Cohen's book lest we forget an essential part of the Jewish heritage."—Aimée Dassa Kligman, Sephardic Heritage Update

"Under Crescent and Cross . . . is a useful volume about an extremely sensitive issue."—Sheldon Kirshner, Canadian Jewish News

"This is a required text for anyone interested in the history of the lives of our ancestors in this region and in other regions during the medieval period, which is written in a readable way and does not demand of its readers prior historical knowledge."—Sasson Somekh, Haaretz

"This important work . . . should be of interest to all those interested in Jewish history. [Cohen's] brilliant and subtle analysis, though focused on the medieval period, provides lessons that are of vital importance today."—John E. Weakland, European Legacy