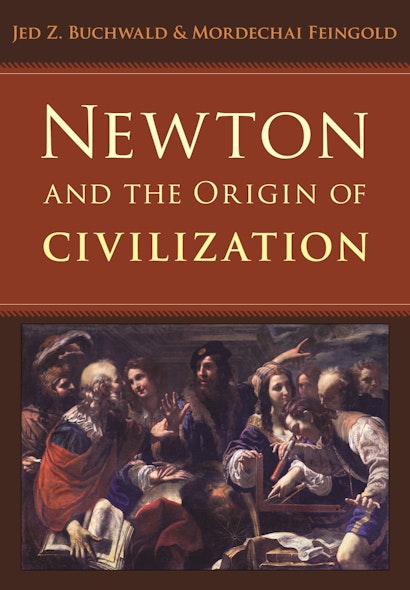 Isaac Newton’s Chronology of Ancient Kingdoms Amended, published in 1728, one year after the great man’s death, unleashed a storm of controversy. And for good reason. The book presents a drastically revised timeline for ancient civilizations, contracting Greek history by five hundred years and Egypt’s by a millennium. Newton and the Origin of Civilization tells the story of how one of the most celebrated figures in the history of mathematics, optics, and mechanics came to apply his unique ways of thinking to problems of history, theology, and mythology, and of how his radical ideas produced an uproar that reverberated in Europe’s learned circles throughout the eighteenth century and beyond.


Jed Buchwald and Mordechai Feingold reveal the manner in which Newton strove for nearly half a century to rectify universal history by reading ancient texts through the lens of astronomy, and to create a tight theoretical system for interpreting the evolution of civilization on the basis of population dynamics. It was during Newton’s earliest years at Cambridge that he developed the core of his singular method for generating and working with trustworthy knowledge, which he applied to his study of the past with the same rigor he brought to his work in physics and mathematics. Drawing extensively on Newton’s unpublished papers and a host of other primary sources, Buchwald and Feingold reconcile Isaac Newton the rational scientist with Newton the natural philosopher, alchemist, theologian, and chronologist of ancient history.

"This argument for intellectual unity in Newton's method of working gives Newton and the Origin of Civlization philosophical as well as historical originality and importance . . . represents a climacteric in our understanding of its subject's life and thought."—Scott Mandelbrote, Times Literary Supplement

"After Gibbon, however, Newton's work as a historian fell into a long oblivion, from which Frank Manuel rescued it in the 1960s; but his elegant study, Isaac Newton: Historian, has now been dwarfed by the labours of Buchwald and Feingold."—Jonathan Reé, London Review of Books

"[T]he story that Buchwald and Feingold trace is a rich and complicated one. The debates are mathematically technical and require a good understanding of ancient Egyptian and classical mythology and biblical history. It would be advantageous for the reader to be fluent in these matters; however, given the nature of Newton's overall approach, this book would certainly benefit a more general reader, particularly one interested in debates about the reliability of textual accounts. This study also compliments scholarship on early modern studies of the Earth where mineralogists and geologists used the history of ancient civilizations as an analogy for establishing Earth chronology, and it potentially sheds light on the regular use of astronomy as a model for thinking about credible arguments in late eighteenth- and early nineteenth-century geology. As the first study to seriously engage with Newton as a chronologer since Frank Manuel's Isaac Newton, Historian (1963), Buchwald and Feingold's publication significantly adds to scholarly commentary on Newton."—Allison Ksiazkiewicz, British Journal for the History of Science

"Buchwald and Feingold's publication significantly adds to scholarly commentary on Newton. The authors' detailed examination of the making of history in the early modern world clearly demonstrates Newton's novel approach in Chronology and its lasting influence on subsequent history writers who were governed by connoisseurship and taste rather than mathematical certainty."—Aluson Ksiazklliwicz, BJHS

"Buchwald and Feingold have resuscitated erudite discussions that were dismissed some 300 years ago. As they point out, Newton's own meandering, copious comparisons between obscure minutiae seem designed to deter even the most stalwart of readers, but their own comprehensive account is written in an admirably lucid style. For anyone who shares their fascination with Newton's obsessions, but quails when confronted by his tortuous prose, they have rendered an invaluable service."—Patricia Fara, Metascience

"Buchwald and Feingold's book is full of remarkable details, insights, and incidents. . . . Certainly, the book is essential reading for anyone with a serious interest either in Newton or in the study of ancient history in the 17th and 18th centuries."—Ernest Davis, SIAM News

"Buchwald and Feingold prove to be excellent guides through this material. . . . They provide a detailed and authoritative commentary. . . . [T]he authors have much to say that is new. . . . Newton specialists should certainly read this book for the many insights the authors offer along the way into Newton's ways of thinking."—John Henry, Science & Education

"Fascinating. . . . [Newton and the Origin of Civilization] is . . . the first serious attempt to solve what might be called the 'Newton three-body problem,' a conundrum at the very center of Newton scholarship today. . . . [T]here is no better starting point for thinking about the Christian theology entangled in Newton's natural science than this book. . . . [A] thoughtful, erudite, and insightful study."—J.B. Shank, Physics Today

"Newton specialists should certainly read this book for the many insights the authors offer along the way into Newton's ways of thinking."—John Henry, Science and Education

"Newton and the Origin of Civilization adds considerably to what we know about Newton as a historian and chronologist."—Margaret C. Jacob, Journal of American History

"[N]o one interested in Newton's amazing contribution to science will fail to find in this book much that is of considerable interest. . . . The discussion of evidence and why it needs the constraints of a theory that makes sense of what the senses so badly disclose is the best I have come across, and it will undoubtedly stimulate historians for a chronologically significant period of time."—William R. Shea, International Archive of the History of Science

"The authors present a well-crafted argument in an accessible yet scholarly style, adding proof, in an often-neglected area of Newtonian studies, to the claim that Newton's 'eccentric' interests were connected to his scientific pursuits. This book will add value to any informed discussion of the contextual nature of the history of science."—Paul Greenham, Historian

"Those courageous readers who go carefully through this book will learn much more about Newton's work and mind, as well as about early modern science and culture, than most other books provide."—Marco Panza, Journal for the History of Astronomy

"This book is a major step forward in understanding one of the main strands in Newton's intellectual life. . . . This is an exemplary presentation of a key figure in the midst and at the mercy of the intellectual currents of his time."—Peter Barker, Renaissance Quarterly

"The reader of Buchwald and Feingold's long awaited book will learn not only about Newton the historian, but also about his theological, alchemical, mathematical, and astronomical work. The authors have something new to say about every facet of Newton's intellectual endeavor: about his peculiar way of working with numbers and data, his anxieties concerning evidence and testimony, his polemics with the English and the French erudites."—Niccolò Guicciardini, author of Isaac Newton on Mathematical Certainty and Method

"This erudite, elegant, and consistently fascinating book is a major contribution to both the history of scholarship and that of science. Buchwald and Feingold examine, in precise and illuminating detail, one of the least understood episodes in the long decline of the encyclopedic idea of learning: Isaac Newton's protracted and serious effort to reconfigure the chronology of the ancient world."—Anthony Grafton, author of Cardano's Cosmos: The Worlds and Works of a Renaissance Astrologer

"A tour de force. Buchwald and Feingold have produced an impressive study of a little known facet of Newton's career, which will surely generate considerable interest in the scholarly community. Newton and the Origin of Civilization traces out a convincing series of linkages between Newton's chronological studies and his more 'mainstream' pursuits."—William R. Newman, author of Atoms and Alchemy: Chymistry and the Experimental Origins of the Scientific Revolution