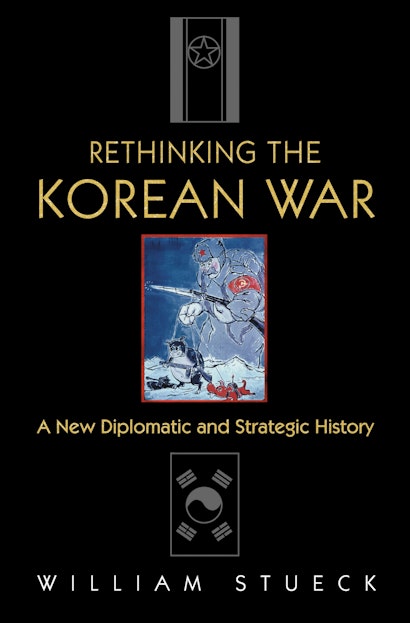 Fought on what to Westerners was a remote peninsula in northeast Asia, the Korean War was a defining moment of the Cold War. It militarized a conflict that previously had been largely political and economic. And it solidified a series of divisions — of Korea into North and South, of Germany and Europe into East and West, and of China into the mainland and Taiwan — which were to persist for at least two generations. Two of these divisions continue to the present, marking two of the most dangerous political hotspots in the post-Cold War world. The Korean War grew out of the Cold War, it exacerbated the Cold War, and its impact transcended the Cold War.


William Stueck presents a fresh analysis of the Korean War’s major diplomatic and strategic issues. Drawing on a cache of newly available information from archives in the United States, China, and the former Soviet Union, he provides an interpretive synthesis for scholars and general readers alike. Beginning with the decision to divide Korea in 1945, he analyzes first the origins and then the course of the conflict. He takes into account the balance between the international and internal factors that led to the war and examines the difficulty in containing and eventually ending the fighting. This discussion covers the progression toward Chinese intervention as well as factors that both prolonged the war and prevented it from expanding beyond Korea. Stueck goes on to address the impact of the war on Korean-American relations and evaluates the performance and durability of an American political culture confronting a challenge from authoritarianism abroad.


Stueck’s crisp yet in-depth analysis combines insightful treatment of past events with a suggestive appraisal of their significance for present and future.

William Stueck is Distinguished Research Professor of History at the University of Georgia and the author of several books, including The Korean War: An International History (Princeton).

"An impressive contribution to the literature on the 'Forgotten War.'. . . Stueck effectively draws together previously disconnected strands into a single volume on the origins, conduct, and effects of that war. . . . This is an important work and will likely appeal to the specialists and general readers alike."—Virginia Quarterly Review

"A lively and balanced reassessment of the origins, character and impact of the Korean War. . . . This book may be recommended to anyone wishing to obtain an up-to-date synthesis of the major disputes and controversies involved in the Korean war."—Peter Lowe, Journal of Military History

"Korea, especially North Korea, has been the subject of many recent headlines. Hence, this work arrives at a most propitious time."—Choice

"It enables readers to understand the war from a variety of different perspectives and . . . helps shed light on the international dimensions of the conflict."—Gregg Brazinsky, Journal of Asian Studies

"Stueck provides a cogent summary of the current scholarship, a clear explanation of his own views, and thought-provoking arguments that will stimulate further debate and research. In the process, Stueck sets forth a systematic and coherent overview of the background to the war, the major military operations, the long process pf the Truce Talks, and the consequences of the war. Thus, his book can also be read with profit as an introductory text and a basis for further reading."—Colonel Donald W. Boose, Jr., Parameters: Us Army War College Quaterly

"William Stueck established himself as one of the leading historians of the early Cold War with the publication of The Korean War: An International History. . . . The relevance of Rethinking the Korean War for current affairs arises from Stueck's persuasive account of both the importance of U.S. leadership in the world and the limits on its options. All Americans, not just scholars, could benefit from the lessons that this book offers. It points the way toward a new international history."—Lloyd E. Ambrosius, Reviews in American History

"This is a fresh, comprehensive, and balanced study that anyone interested in the Korean War—and, more broadly, in the development of the global Cold War—will find the need to read. Supported by insights gained from new sources and demonstrating a high sensitivity toward the international nature of the conflict in Korea, it is of great scholarly significance."—Chen Jian, University of Virginia