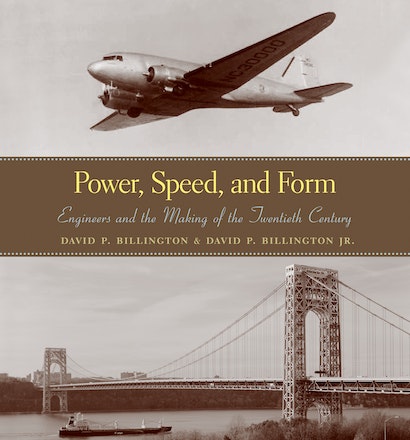 Power, Speed, and Form is the first accessible account of the engineering behind eight breakthrough innovations that transformed American life from 1876 to 1939 — the telephone, electric power, oil refining, the automobile, the airplane, radio, the long-span steel bridge, and building with reinforced concrete. Beginning with Thomas Edison’s system to generate and distribute electric power, the authors explain the Bell telephone, the oil refining processes of William Burton and Eugene Houdry, Henry Ford’s Model T car and the response by General Motors, the Wright brothers’ airplane, radio innovations from Marconi to Armstrong, Othmar Ammann’s George Washington Bridge, the reinforced concrete structures of John Eastwood and Anton Tedesko, and in the 1930s, the Chrysler Airflow car and the Douglas DC-3 airplane.


These innovations used simple numerical ideas, which the Billingtons integrate with short narrative accounts of each breakthrough — a unique and effective way to introduce engineering and how engineers think. The book shows how the best engineering exemplifies efficiency, economy and, where possible, elegance. With Power, Speed, and Form, educators, first-year engineering students, liberal arts students, and general readers now have, for the first time in one volume, an accessible and readable history of engineering achievements that were vital to America’s development and that are still the foundations of modern life.

"David P. Billington and David P. Billington, Jr., hope that their new book will increase technological literacy among college students. But this well-written and nicely illustrated volume may also reach a broader audiences. Power, Speed, and Form will introduce engineering students to eminent predecessors from whom there is still much to learn, especially about the use of numerical language. This book will also help students in other disciplines appreciate engineering approaches to problem solving."—Thomas P. Hughes, American Scientist

"The authors discuss eight transformative inventions . . . within their sociocultural context. They also examine the lives of the inventors as well as the cumulative process of invention. The superb figures . . . and many photos nicely illustrate the Billingtons' overriding themes: the importance of technological literacy and the fact that original engineering is based on simple ideas."—Library Journal

"The book is a sequel to The Innovators (1996), which covered American engineering from 1776 to 1883; the two books together explain the principal engineering ideas that helped transform the U.S. from an agrarian society in the eighteenth century to the industrial civilization it became in the twentieth century."—George Cohen, Booklist

"[A] coherent and appealing approach, introducing engineering as a historical sequence of ideas and events, part of a canon of great ideas. . . . [A]n engaging narrative that explores the work of key innovators. . . . For the Billingtons, design is the primary function of engineering, one that distinguishes it from science."—Robin Tatu, ASEE Prism

"The authors . . . discuss the development of each [innovation] in a way that is readily accessible to building engineers and non-engineers—their ultimate purpose. . . . The book, then, was meant to serve as a text for introductory engineering courses, especially those designed to help liberal arts students satisfy technical literacy requirements. Such courses can also excite engineering students by explaining how many innovations sprang from ideas that though novel were relatively simple."—Ray Bert, Civil Engineering

"By introducing the fundamental theories upon which various significant technological achievements are based, Billington Sr. . . . and Billington Jr. . . . shed light on the unseen foundations of invention. . . . A remarkable accomplishment of this book is that it presents these theories and equations in a manner that is understandable to general readers, rather than accessible only to engineers or scientists. Thus, it fills a much-needed role in helping to enhance technological literacy and understanding among the general public. . . . Highly recommended."—Choice

"Power, Speed, and Form is physically an extraordinary volume...chock full of the most extraordinary photos.... Yet this is not a picture book. It is a serious history of the development of American technology in the period between the year 1876...and 1939.... [W]hat is unique, and what, along with the illustrations, makes this book something of a treasure, is the inclusion of more than forty sidebars, each a full-page explication in words, numerical formulas, and splendidly clear diagrams, of the historic innovations discussed in the text."—Samuel C. Florman, Technology and Culture