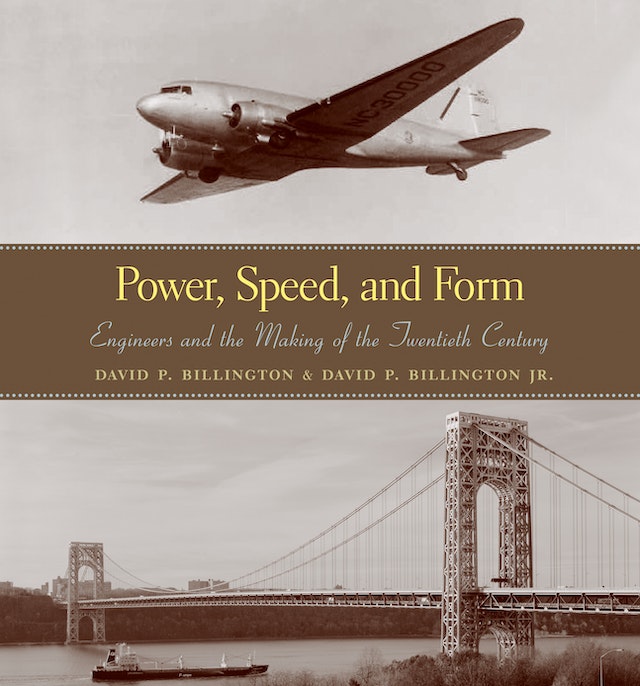 Power, Speed, and Form is the first accessible account of the engineering behind eight breakthrough innovations that transformed American life from 1876 to 1939 — the telephone, electric power, oil refining, the automobile, the airplane, radio, the long-span steel bridge, and building with reinforced concrete. Beginning with Thomas Edison’s system to generate and distribute electric power, the authors explain the Bell telephone, the oil refining processes of William Burton and Eugene Houdry, Henry Ford’s Model T car and the response by General Motors, the Wright brothers’ airplane, radio innovations from Marconi to Armstrong, Othmar Ammann’s George Washington Bridge, the reinforced concrete structures of John Eastwood and Anton Tedesko, and in the 1930s, the Chrysler Airflow car and the Douglas DC-3 airplane.


These innovations used simple numerical ideas, which the Billingtons integrate with short narrative accounts of each breakthrough — a unique and effective way to introduce engineering and how engineers think. The book shows how the best engineering exemplifies efficiency, economy and, where possible, elegance. With Power, Speed, and Form, educators, first-year engineering students, liberal arts students, and general readers now have, for the first time in one volume, an accessible and readable history of engineering achievements that were vital to America’s development and that are still the foundations of modern life.