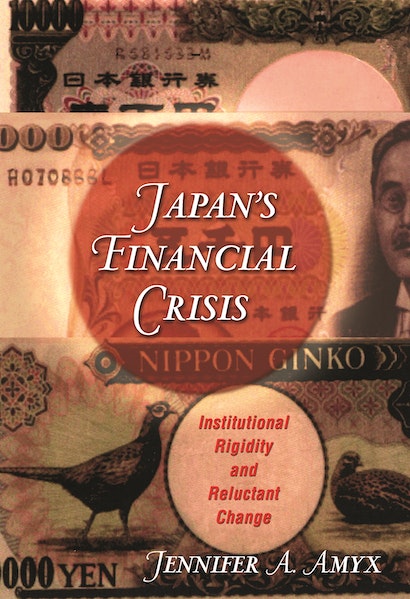 At the beginning of the 1990s, a massive speculative asset bubble burst in Japan, leaving the nation’s banks with an enormous burden of nonperforming loans. Banking crises have become increasingly common across the globe, but what was distinctive about the Japanese case was the unusually long delay before the government intervened to aggressively address the bad debt problem. The postponed response by Japanese authorities to the nation’s banking crisis has had enormous political and economic consequences for Japan as well as for the rest of the world. This book helps us understand the nature of the Japanese government’s response while also providing important insights into why Japan seems unable to get its financial system back on track 13 years later.


The book focuses on the role of policy networks in Japanese finance, showing with nuance and detail how Japan’s Finance Ministry was embedded within the political and financial worlds, how that structure was similar to and different from that of its counterparts in other countries, and how the distinctive nature of Japan’s institutional arrangements affected the capacity of the government to manage change.


The book focuses in particular on two intervening variables that bring about a functional shift in the Finance Ministry’s policy networks: domestic political change under coalition government and a dramatic rise in information requirements for effective regulation. As a result of change in these variables, networks that once enhanced policymaking capacity in Japanese finance became “paralyzing networks” — with disastrous results.

Jennifer Amyx is Assistant Professor of Political Science at the University of Pennsylvania.

"This is a fine book, one of the best I have read on Japan's political economy in years. . . . Amyx combines well an insightful overall analytical framework with a range and depth of rich supporting detail. This book is essential for anyone interested in Japan's financial system, political economy, or the comparative development of financial systems and their regulatory arrangements, in which Japan is such an important case."—Hugh Patrick, Journal of East Asian Studies

"This is an important contribution to our understanding of regulatory reform, and essential reading for students of Japan's financial markets."—Henry Laurence, Political Science Quarterly

"Japan's Financial Crisis is a must-read for any reader interested in Japanese political economy or political economy. It will stand out as a classic interpretation of the peculiar Japanese trajectory."—Yves Tiberghien, Perspectives on Politics

"No one has laid out micro data on the Japanese Ministry of Finance as clearly as Amyx does here. And no wonder they haven't. As Amyx's footnotes testify, the data she has put together were gathered painstakingly from a wide variety of sources, including many interviews with the very people making the decisions. With these data, Amyx gives us with nuance and detail, the inside scoop on the officials who operated some of the most important levers of economic policy during Japan's bubble-and-burst years."—Frances Rosenbluth, Yale University

"A lucidly written and succinct account of why financial supervision in Japan, which had been so successful in the 1970s, became dysfunctional after the 1980s. Deceptively simple, but full of sound views, this timely work serves as a good and coherent account of how the powers of the Ministry of Finance and Japanese politicians were undermined."—Nobuhiro Hiwatari, Tokyo University