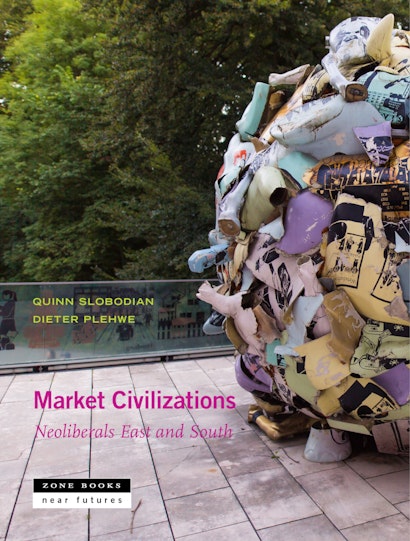 Where does free market ideology come from? Recent work on the neoliberal intellectual movement around the Mont Pelerin Society has allowed for closer study of the relationship between ideas, interests, and institutions. Yet even as this literature brought neoliberalism down to earth, it tended to reproduce a European and American perspective on the world. With the notable exception of Augusto Pinochet’s Chile, long seen as a laboratory of neoliberalism, the new literature followed a story of diffusion as ideas migrated outward from the Global South. Even in the most innovative work, the cast of characters remains surprisingly limited, clustering around famous intellectuals like Milton Friedman and Friedrich Hayek.

Market Civilizations redresses this absence by introducing a range of characters and voices active in the transnational neoliberal movement from the Global South and Eastern Europe. This includes B. R. Shenoy, an early member of the Mont Pelerin Society from India, who has been canonized in some circles since the Singh reforms; Manuel Ayau, another MPS president and founder of the Marroquin University, an underappreciated Latin American node in the neoliberal network; Chinese intellectuals who read Hayek and Mises through local circumstances; and many others. Seeing neoliberalism from beyond the industrial core helps us understand what made radical capitalism attractive to diverse populations and how their often disruptive policy ideas “went local.”

Quinn Slobodian is Marion Butler MacLean Associate Professor of the History of Ideas at Wellesley College. He is the author of Globalists: The End of Empire and the Birth of Neoliberalism. Dieter Plehwe is a research fellow at the Center for Civil Society Research of the WZB Berlin Social Science Center and private lecturer of political science at the University of Kassel. He co-edited Nine Lives of Neoliberalism, Road from Mont Pèlerin, and Neoliberal Hegemony: A Global Critique.

“This landmark study confronts a key barrier to ‘global knowledge’ and scholarship, particularly in this age of ‘de-colonizing’ knowledge. This outstanding collection is the response of how to overcome such obstacles, a model others would do well to follow. Slobodian and Plehwe have gathered a group of excellent scholars expert in the histories of economic ideas and philosophies of a wide variety of societies in global East and South – including China, India, Iceland, Montenegro, Brazil, Guatemala, Russia – to consider the global and local knowledge networks that helped make neoliberalism a dominant global ideology for ‘market civilizations’. The story of a smooth process of knowledge movement from Western ‘core’ to eastern and southern ‘peripheries’ is not only challenged via local histories and ideas, it is complexified to form a more accurate assessment of how ideas become the bases of profound transformations. The book successfully establishes that there are simultaneous, separate, and inter-connected, local and global conversations, layers upon layers of thinking, understanding, and practice, independent, semi-autonomous, and dependent in a bewildering complexity. A study of ‘global knowledge’ at its best, and a model for emulation. A brilliant must-read collection.”—Inderjeet Parmar, University of London

“Over 150 years ago Francis Galton made a bet that diffusion of practices from a common point to other sites is far more likely to succeed than multiple sites spontaneously finding similar solutions to common problems. The student of neoliberalism is a subconscious Galtonian, viewing neoliberal thought as a western core diffusing to a global periphery that ‘sucks it up’ with various national edits to the script. Not so say Plehwe and Slobodian. To truly understand neoliberalism’s global reach we have to break with Galton and appreciate how indigenous varieties emerge and thrive autochthonously. Doing so explains its persistence since ‘it’ is never one thing.”—Mark Blyth, Brown University

“Market Civilizations shines a bright light on how neoliberalism has ‘traveled’ beyond the neo-liberal heartlands. In a series of illuminating essays, a stellar group of contributors provide highly detailed, nicely nuanced analyses of how neoliberalism ‘went local’ in unexpected ways in unusual places. And in so doing, they offer ground-breaking insights into the ins-and-outs as well as the ups-and-downs of neo-liberal ideas, adaptations, and applications in a wide range of lesser-known cases around the world.”—Vivien A. Schmidt, Boston University

“Market Civilizations is a must-read for all of us trying to better understand the diverse national and local contexts across the world from which the global neoliberal intellectual movement took force in the twentieth century. Challenging leading notions among Global North scholars that neoliberalism has been a Global North project transferred to (and diffused and translated for) the rest of the world, the volume’s contributors unearth local and national spaces and arenas of neoliberal reflection and inflection during the past century in India, Japan, South Africa, Russia, China, Australia, Brazil, Guatemala, Montenegro, and Iceland. Through its local and national foci across these geographies, Market Civilizations absolutely complicates our perceptions of how and why neoliberalism has enjoyed a transnational spread and this intellectual movement’s varying relationships with the state, nationalism, the local arena, religion, white Anglo-American supremacy, democracy, and authoritarianism. Market Civilization leaves us with an intellectually vibrant understanding of neoliberalism as a diffuse and diverse school of thought, with various proponents across the world harboring varying reasons for complementing an evolving liberal international order and their own distinct means and understandings on what it means to nurture ‘market civilizations,’ or rather, what it means to shape societies by the ‘logic of capital.’”—Maribel Morey, Miami Institute for the Social Sciences

"Critics of neoliberalism have long treated it as a homogeneous and homogenising force, radially spreading out from the capitalist metropoles of the Global North and spearheaded by Western intellectuals and institutions. Slobodian and Plehwe have assembled a kaleidoscope of studies which explode this view, revealing the plural origins and forms of neoliberal thought and practice. Ranging from efforts to neutralise Black resistance in apartheid South Africa to 'ultraliberal' online movements in contemporary Brazil, from Turkey's experiments in Islamic neoliberalism to their Hindu nationalist counterparts in India, Market Civilizations is an indispensable ideological map at a time when the mutations and fragmentations of neoliberalism are too often mistaken for its demise." —Alberto Toscano, Goldsmiths, University of London