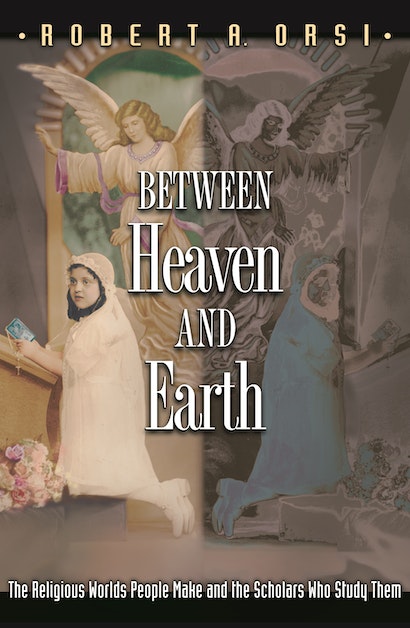 Between Heaven and Earth explores the relationships men, women, and children have formed with the Virgin Mary and the saints in twentieth-century American Catholic history, and reflects, more broadly, on how people live in the company of sacred figures and how these relationships shape the ties between people on earth. In this boldly argued and beautifully written book, Robert Orsi also considers how scholars of religion occupy the ground in between belief and analysis, faith and scholarship.


Orsi infuses his analysis with an autobiographical voice steeped in his own Italian-American Catholic background — from the devotion of his uncle Sal, who had cerebral palsy, to a “crippled saint,” Margaret of Castello; to the bond of his Tuscan grandmother with Saint Gemma Galgani.


Religion exists not as a medium of making meanings, Orsi maintains, but as a network of relationships between heaven and earth involving people of all ages as well as the many sacred figures they hold dear. Orsi argues that modern academic theorizing about religion has long sanctioned dubious distinctions between “good” or “real” religious expression on the one hand and “bad” or “bogus” religion on the other, which marginalize these everyday relationships with sacred figures.


This book is a brilliant critical inquiry into the lives that people make, for better or worse, between heaven and earth, and into the ways scholars of religion could better study of these worlds.

Robert A. Orsi is Charles Warren Professor of the History of Religion in America, Harvard Divinity School. He is the author of The Madonna of 115th Street, winner of the John Gilmary Shea Prize of the American Catholic Historical Association; and of Thank You, St. Jude, winner of the 1998 Merle Curti Award in American Social History.

"[Orsi] challenges the human sciences to return to religion the uncertainty and angst it holds when it is actually lived rather than merely studied and theorized. . . . Thoughtful and a pleasure to read, Between Heaven and Earth is a major contribution to religious studies and to the anthropology of religion, and will be of great interest to scholars concerned with subjectivity in the contemporary world."—João Biehl, Anthropological Quarterly

"Between Heaven and Earth documents Orsi's growing confidence in the belief that religion is less about formal ideas or morality than how it structures networks of relationships, most important the relationships between family members, loved ones, their saints and Gods. . . . The result is frequently dazzling. . . . [A] compelling blend of personal narrative and scholarly inquiry."—John T. McGreevy, Commonweal

"Between Heaven and Earth is a classic . . . . Balancing historical, archival and personal evidence in a rare style of historical auto-ethnography to study religious intimacy in fresh and intellectually satisfying ways, Orsi takes readers more deeply into his theoretical and conceptual levels of argument by introducing them to his uncle Sal and his grandmother. . . . This is a memorable book, both for the story of Orsi's family, in which he situates historical and cultural practices, and for the intellectual challenge his work represents to the interdisciplinary study of religions."—Claire Hoertz Badaracco, America

"Orsi argues that religion is best viewed not as a tool of meaning making, but as a complex and ambiguous 'network of relationships between heaven and earth involving humans of all ages and many different sacred figures together.' He persuasively demonstrates this through a series of case studies focused primarily on 20th-century American Catholicism. Orsi mixes personal family history with anthropological and historical argumentations. . . . [T]he book moves far beyond the study of Catholicism. Orsi's broader foci are religion as it is practiced and the frames that scholars of religion use to interpret their subjects."—Choice

"Thoughtful and a pleasure to read, Between Heaven and Earth is a major contribution to religious studies and to the anthropology of religion, and will be of great interest to scholars concerned with subjectivity in the contemporary world."—Joao Biehl, Anthropological Quarterly

"Orsi shows how one might successfully approach a study of religion that is both critical and radically empirical, focused on the way that people inhabit and make their world through religious idiom embedded in a network of social and material relationships. This book is as methodologically important as it is engaging to read."—Richard J. Callahan, Jr., Religion

"Robert Orsi strongly makes the case that positive and negative assessments of religious practice are beside the point. . . . [T]he power of Between Heaven and Earth is not in replacing the either/or of the good religion schema with neither/nor. Rather it is Orsi's challenge to view religion as we might view other relationships in our lives: with respect for its complexity, and, above all, with compassion."—Peter Manseau, Church History

"In this much-reviewed and widely praised set of essays on the religious experience of mid-twentieth-century working-class Italian-American Catholics, Robert Orsi speaks to a series of large questions in the study of religion more generally. Drawing from his own family history, he provides an intimate look at the interior world of the Catholicism he knows best, expanding the usual cast of adult devotees to include children, saints, and scholars."—Ann Taves, Journal of Religion

"Between Heaven and Earth is both a model of and a model for how one might learn about vernacular religion through material culture and ritual practice. I have often drawn on and referred to Orsi's book."—Peter Savastano, transformations

"The author writes as a committed insider, and much of his work is biographical in the context of his own family and also autobiographical. This is possibly the finest and most meaningful aspect of the entire book."—Professor Graham Duncan, Studia Historiae Ecclesiasticae

"A hugely important, beautifully written book. Between Heaven and Earth is vintage Orsi, the work of our leading historian of twentieth-century American Catholicism at the top of his game."—Richard Wightman Fox, University of Southern California, author of Jesus in America: Personal Savior, Cultural Hero, National Obsession

"A stunning contribution to the field. Not only does this book creatively transcend the old maxim about religion being about the construction of meaning, but it also radically undercuts scholars who disparage the 'superstitious' worlds of their subjects. Moreover, in a dizzying, personal narrative Orsi takes us into the hidden places of his own and his family's soul and spirit—with surgical precision that excises pain to make it available for methodological scrutiny. What is so refreshing about reading Orsi's work is that it genuinely is literature: it is religious studies as an art form, highly disciplined, superbly executed, gripping in presentation. This is a book that holds the reader."—Catherine L. Albanese, University of California, Santa Barbara, author of America: Religions and Religion

"Robert Orsi's Between Heaven and Earth is yet another one of his masterful scholarly achievements in the study of the history of Catholicism in America. I cannot think of anyone writing in the area who has the depth, intellect, creativity, and knowledge of Orsi."—Gary M. Laderman, Emory University, author of Rest in Peace: A Cultural History of Death and the Funeral Home in Twentieth-Century America

"Orsi has not written a memoir, per se, but has rather found in his own family a rich archive, full of religious experiences that tell stories about the extraordinary meanings ordinary people create in their lives."—Publishers Weekly

"Religion is 'not benign,' Orsi warns, but is as richly ambiguous, as fraught with complexity, contradiction and tragedy as the lives of its adherents. By its very nature, religion deals with our deepest longings and most bitter frustrations, especially concerning our relationships with others. As a consequence, he argues, it cannot be studied in a merely 'scientific' or 'objective' way."—Paul Baumann, Chicago Tribune