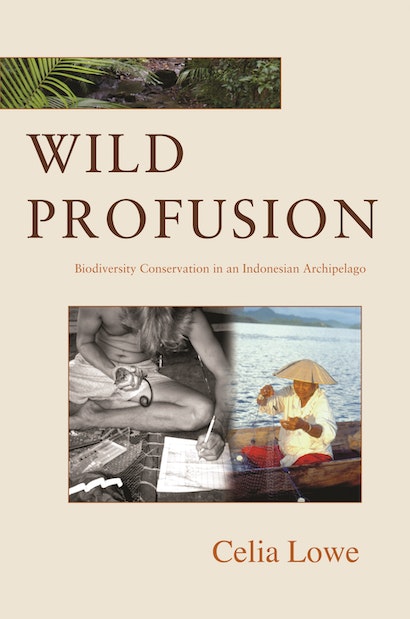 Wild Profusion tells the fascinating story of biodiversity conservation in Indonesia in the decade culminating in the great fires of 1997-98 — a time when the country’s environment became a point of concern for social and environmental activists, scientists, and the many fishermen and farmers nationwide who suffered from degraded environments and faced accusations that they were destroying nature. Celia Lowe argues that biodiversity, in 1990s Indonesia, implied a particular convergence of nature, nation, science, and identity that made Indonesians’ mapping of the concept distinct within transnational practices of nature conservation at the time.


Lowe recounts the efforts of Indonesian biologists to document the species of the Togean Islands, to “develop” Togean people, and to turn this archipelago off the coast of Sulawesi into a national park. Indonesian scientists aspired to a conservation biology that was both internationally recognizable and politically effective in the Indonesian context. Simultaneously, Lowe describes the experiences of Togean Sama people who had their own understandings of nature and nation. To place Sama and scientist into the same conceptual frame, Lowe studies Sama ideas in the context of transnational thought rather than local knowledge.


In tracking the practice of conservation biology in a postcolonial setting, Wild Profusion explores what in nature can count as important and for whom.

Celia Lowe is Assistant Professor of Anthropology at the University of Washington.

"Wild Profusion is a beautifully crafted ethnography of natures in the making in the Togean Islands of Indonesia. Through lively prose and a brilliantly executed analytics of power, Lowe takes the reader into the complex world of biodiversity conservation in action. Along the way, we meet Indonesian scientists who promote national development projects and negotiate their relations to Euro-American conservation experts, Togean subjects who struggle to assert their own place in the landscape of biodiversity knowledge, and all of the flora and fauna brought to stunning visibility in the dream world of a national park. Lowe also provides us with a bold philosophical meditation on questions of universalism and the particular, the natural and the social, the nation and the colony. Wild Profusion will quickly emerge as a classic text in the new ethnography of conservation science and contested environmentalisms."—Ralph Litzinger, Duke University

"This is an extraordinary book: both eloquent and elegantly argued. It presents a clear and compelling argument about 'reason' at the boundaries of the West, and striking portraits of scientists and lay people working at this boundary."—Anna L. Tsing, University of California, Santa Cruz, author of Friction and In the Realm of the Diamond Queen