How philanthropy has shaped America in the twentieth century 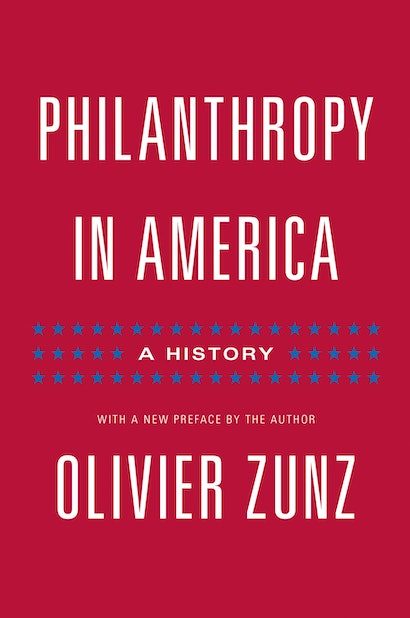 American philanthropy today expands knowledge, champions social movements, defines active citizenship, influences policymaking, and addresses humanitarian crises. How did philanthropy become such a powerful and integral force in American society? Philanthropy in America is the first book to explore in depth the twentieth-century growth of this unique phenomenon. Ranging from the influential large-scale foundations established by tycoons such as John D. Rockefeller, Sr., and the mass mobilization of small donors by the Red Cross and March of Dimes, to the recent social advocacy of individuals like Bill Gates and George Soros, respected historian Olivier Zunz chronicles the tight connections between private giving and public affairs, and shows how this union has enlarged democracy and shaped history.

Demonstrating that America has cultivated and relied on philanthropy more than any other country, Philanthropy in America examines how giving for the betterment of all became embedded in the fabric of the nation’s civic democracy.

Olivier Zunz is the Commonwealth Professor of History at the University of Virginia. He is the author of Why the American Century?, Making America Corporate, and The Changing Face of Inequality.

"In a sweeping, insightful history, Olivier Zunz has traced the evolution of American philanthropy over the past 150 years and its contribution to democracy and civil society. What is particularly satisfying is his focus—somewhat rare among books about American philanthropy—on the extent to which foundations and other grantmaking programs have been involved in shaping national affairs and public policy. This involvement, Zunz rightfully claims, has been an important force not only in strengthening American democracy but in establishing philanthropic institutions as integral parts of society. . . . A splendid book about philanthropy in America."—Pablo Eisenberg, The Nation

"One of the lessons of Olivier Zunz's meticulous new history, however, is that innovation in philanthropy is not new. There has been constant evolution in the ways that US citizens donate to good causes, in how private charity interacts with government policy, and in the degree to which it is dominated by the wealthy."—John Gapper, Financial Times

"A readable account of how philanthropy caught on in the United States more pervasively than any other nation. . . . Zunz mixes case studies, mini-biography and academic theory to demonstrate that both the superwealthy and common folks have invested in giving to the needy as part of an effort to make America a better place. . . . A sterling example of how an academic author can combine high-level theory with interesting, important real-world examples."—Kirkus Reviews

"[T]his is an excellent resource for those interested in philanthropy and its place in American life."—Foreign Affairs

"In Philanthropy in America, a beautifully written and constantly engaging new book, the historian Olivier Zunz takes the reader on a journey from the mid-19th century origins of organized giving to the present day."—Michael Edwards, Chronicle of Philanthropy

"Zunz succeeds especially well in tracing the legal and regulatory evolution of philanthropy and also in showing that many of the questions we in the sector debate today have in fact been around for a long time, albeit it in shifting guises. . . . This book is a must-read for any practitioner or student of philanthropy; and I recommend it as well to serious students of general U.S. history."—Sean Dobson, National Committee for Responsive Philanthropy (NCRP) Blog

"In this inspiring, captivating, and thought-provoking book, Zunz presents a comprehensive history of twentieth-century philanthropy in the United States."—Thomas Adam, Journal of Interdisciplinary History

"Chapters on the relationship between the institution of income taxes, the price of war, and the creation of 'mass philanthropy' will make any reader stop and ask deeper questions about the contemporary relationship between those same structures. It's a great overview and should be read by everyone currently active in nonprofits or foundations who has ever asked, 'Wait, why do we do it this way?'"—Lucy Bernholz, Philanthropy 2173

"Will be of interest to all those who wish to understand better the development of a distinctive style of American philanthropy since the Civil War. . . . Important."—Jacqueline Pfeffer Merrill, Philanthropy Daily

"A quiz to start with: What do Americans fund every year at levels comparable to annual budget of the Pentagon? Answer: the non-profit sector. Olivier Zunz drops that small, astonishing fact at the beginning of his splendid history of philanthropy and it serves as a double reminder: first, philanthropy in the United States has grown to be an enormous enterprise; and second, we don't have a comprehensive sense of its history . . . until now. Philanthropy in America stands as the best introduction to the topic and I am quite sure that it will be the starting point for other scholars who want to investigate some of the many issues raised by this book."—Steven Conn, eHistory

"The greatest value that Philanthropy in America brings to today's social sector—perspective . . . that's something we get from history, from experience, from research. . . . From each other."—Todd J. Sukol, Do More Mission!

"[A] solid history of the foundation-building movement that began in the late-19th century and continues to this day. And much of that history is fascinating. Zunz recounts a number of largely forgotten historical episodes. He describes the rise of associated philanthropic groups (like the United Way or the March of Dimes), the anti-communist efforts of American foundations early in the Cold War, and even the critical support provided by J. Howard Pew to an up-and-coming Billy Graham."—John Steele Gordon, Philanthropy Roundtable

"His new and remarkable book tells the story of the last 100-plus years of organized philanthropy, from the days of Andrew Carnegie to the Bill and Melinda Gates Foundation. Turning the pages, one quickly sees that the impulse to spend money well—a quintessentially American preoccupation—is, nevertheless, not as tame as one imagines."—Andrew Burstein, Advocate

"Zunz's book not only documents the historical development of philanthropy, philanthropists' involvement, and government's role in the third sector, but also provides blueprint for what a democratic society experiences when it wants to encourage the growth of a voluntary sector. This book should be read by those who are involved as professionals, volunteers, contributors and politicians both in the United States and foreign countries."—Stephen G. Donshik, eJewish Philanthropy

"Those of you wishing to get a sweeping overview of the history of the nonprofit sector and philanthropy in the United States will be well rewarded by reading Philanthropy in America: A History by Oliver Zunz."—Rob Bruno, Nonprofit Literature Blog

"There is no shortage of causes clamoring for our attention—and our dollars. Philanthropic drives and organizations are woven into the fabric of American life. In Philanthropy in America, Olivier Zunz, a historian at the University of Virginia, has written a lucid and engaging story of how this came to be."—Suzanne Garment and Leslie Lenkowsky, Wilson Quarterly

"[T]hose wanting to know how modern philanthropy has shaped the lives of American citizens will want to start with Zunz's work before pursuing more detailed study of particular movements and causes."—Jonathan Newell, Journal of Markets and Morality

"The story that Zunz chooses to tell, though not comprehensive, is fascinating; and he tells it well. . . . Overall, this is a book I would highly recommend."—Donald E. Frey, EH.Net

"Zunz offers an excellent history of how US philanthropy and government have collaborated to serve the US community. . . . Paraphrasing de Tocqueville, Zunz argues that turning self-interest into a benefit for all was a major development for civilization because, as an impulse, self-interest was so much more available than virtue. Insightful."—Choice

"There are three kinds of book reviews that are tricky to write. The first is when the book is not very good. . . . The second is slightly harder to write, when the book is simply unexceptional. . . . But the hardest of all reviews to write, is when the book is so good that one is tempted simply to emit a long sigh of satisfaction and to repeatedly urge people to buy and read it at their first opportunity. This review is of that last kind, so forgive me if I struggle to do more than string superlatives together and seem to be on a percentage from the publishers (which I am assuredly not!). . . . [A] much-needed in-depth history of philanthropy."—Dr Beth Breeze, Philanthropy UK

"Philanthropy in America, is a major contribution to philanthropic studies—thoroughly researched and documented, clearly narrated and argued, and illuminating a main theme in the history of twentieth-century American philanthropy: its development in civil society. Within the limits Professor Zunz has chosen, he has rendered a great service to the entire professional philanthropic community, both academic and practical, for which we should all be grateful."—George McCully, Conversations on Philanthropy

"I may now add to the syllabus Olivier Zunz's well written and wide-ranging new history, Philanthropy in America. . . . I have been practicing, studying, and teaching about philanthropy for more than 15 years, and I learned a lot from Zunz."—Gara LaMarche, Public Administration Review

"Marshaling his unmatched encyclopedic knowledge, Olivier Zunz has produced a masterful and comprehensive account of the power and influence of American philanthropy. His book places the subject into a larger societal and global framework, and will be of great interest to historians and social scientists working on the dynamics and ethos of modern capitalism, as well as to all individuals involved in the world of foundations and NGOs."—V.R. Berghahn, Columbia University

"Compelling and beautifully written, this narrative about the development of philanthropy from the nineteenth century through the present day bears the hallmark of rigorous scholarship and authoritative research. Showing how the diversity of givers and giving in America has advanced the nation's social, cultural, intellectual, and economic life, Zunz demonstrates that big money philanthropy and mass giving have left a uniquely democratic imprint on the country and set an example for philanthropic efforts around the world."—Vartan Gregorian, Carnegie Corporation of New York

"This beautifully crafted book, by master historian Olivier Zunz, transforms our understanding of American civil society. Zunz compellingly traces the often auspicious, yet sometimes troublesome relationships that bind government to philanthropy, money to responsibility, and charitable decisions to social reform and democratic performance. Anyone interested in U.S. politics and society will want to engage with this riveting narrative."—Ira Katznelson, Columbia University

"Can capitalism produce general social betterment? A history of the unique American experiment of using private wealth for the public good, this very important book demonstrates that the enlightened pursuit of self-interest enhances the commonweal. It also shows how the encounter between philanthropy and the state has, in the United States, created a nonprofit sector capable of addressing the most urgent claims for social justice. No other book provides a comprehensive account of philanthropy at this level of scholarly mastery."—Stanley Katz, Princeton University

"By illuminating the important history of America's vast not-for-profit sector, Zunz has made a major contribution to American historical scholarship. Zunz's work—sure to spark discussion—will be the place scholars and students go to begin any investigation of philanthropy in America."—James T. Kloppenberg, author of Reading Obama