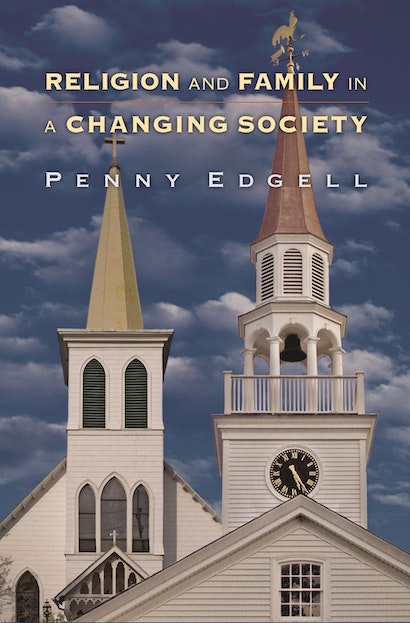 The 1950s religious boom was organized around the male-breadwinner lifestyle in the burgeoning postwar suburbs. But since the 1950s, family life has been fundamentally reconfigured in the United States. How do religion and family fit together today?


This book examines how religious congregations in America have responded to changes in family structure, and how families participate in local religious life. Based on a study of congregations and community residents in upstate New York, sociologist Penny Edgell argues that while some religious groups may be nostalgic for the Ozzie and Harriet days, others are changing, knowing that fewer and fewer families fit this traditional pattern. In order to keep members with nontraditional family arrangements within the congregation, these innovators have sought to emphasize individual freedom and personal spirituality and actively to welcome single adults and those from nontraditional families.


Edgell shows that mothers and fathers seek involvement in congregations for different reasons. Men tend to think of congregations as social support structures, and to get involved as a means of participating in the lives of their children. Women, by contrast, are more often motivated by the quest for religious experience, and can adapt more readily to pluralist ideas about family structure. This, Edgell concludes, may explain the attraction of men to more conservative congregations, and women to nontraditional religious groups.

Penny Edgell is Associate Professor of Sociology at the University of Minnesota. She is the author of Congregations in Conflict: Cultural Models of Local Religioius Life, which won the 1999 best book award from the American Sociological Association's religion section.

"Penny Edgell's new monograph provides a much-needed analysis of the intersections of religion and family life. . . . Edgell's work reaches beyond sociology of religion and sociology of family in an effort to speak to broader questions about culture, meaning, social engagement, and social change."—Sally K. Gallagher, Journal for the Scientific Study of Religion

"Religion and Family in a Changing Society should be the starting point for anyone interested in understanding contemporary family-religion dynamics."—Scott M. Myers, American Journal of Sociology

"The research in this book is more extensive than almost anything else on this topic—and this is a topic that has received considerable attention in recent years. The particular attractiveness of the book is its combination of qualitative and quantitative evidence. I can think of no other book that brings the two together in this way."—Robert Wuthnow, Princeton University

"This book is a significant contribution to the contemporary discussion about the relation of family to religious institutions in the United States. It corrects several misunderstandings and clarifies a number of ambiguities about the religion-family link. It also displays a sophisticated social-science methodology and makes important theoretical contributions to both social theory and the sociology of religion."—Don Browning, University of Chicago