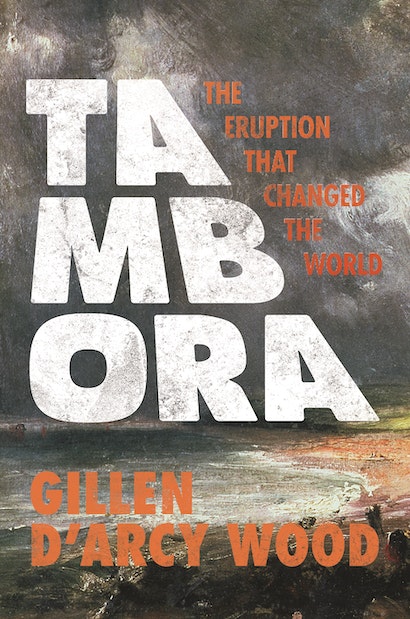 When Indonesia’s Mount Tambora erupted in 1815, it unleashed the most destructive wave of extreme weather the world has witnessed in thousands of years. The volcano’s massive sulfate dust cloud enveloped the Earth, cooling temperatures and disrupting major weather systems for more than three years. Communities worldwide endured famine, disease, and civil unrest on a catastrophic scale.

Here, Gillen D’Arcy Wood traces Tambora’s global and historical reach: how the volcano’s three-year climate change regime initiated the first worldwide cholera pandemic, expanded opium markets in China, and plunged the United States into its first economic depression. Bringing the history of this planetary emergency to life, Tambora sheds light on the fragile interdependence of climate and human societies to offer a cautionary tale about the potential tragic impacts of drastic climate change in our own century.

Gillen D'Arcy Wood is professor of English at the University of Illinois, Urbana-Champaign, where he directs the Sustainability Studies Initiative in the Humanities.

"This engaging interdisciplinary study links Tambora's disruption of global weather patterns not only to Arctic melting, famine, and cholera but to the landscape paintings of William Turner, the debts that plagued Thomas Jefferson near the end of his life, the elegiac verse of the Chinese poet Li Yuyang, and Mary Shelley's novel 'Frankenstein,' written in 1816, the 'Year without a Summer.' The lessons of Tambora's 'Frankenstein weather'—as Wood is quick to point out—may carry special weight in today's era of climate upheaval."—The New Yorker

"Wood, who intends no hyperbole in his subtitle, makes a convincing case for Tambora's role in causing 'the most catastrophic sustained weather crisis of the millennium.'"—Thomas Jones, London Review of Books

"Persuasively entertaining. . . . If not the first, Mr. Wood's book is by far the best on the subject, and most comprehensive. What Mr. Wood has achieved in Tambora is to uncover, collect, and collate a great deal of new scientific evidence to bolster his case."—Simon Winchester, Wall Street Journal

"The greatest volcanic eruption of modern times occurred in 1815 on the small island of Tambora in the East Indies. It spawned the most extreme weather in thousands of years. In what contemporaries described as the 'year without a summer,' its immense ash cloud encircled and cooled the Earth. While historians have mostly ignored the decades of worldwide misery, starvation, and disease that followed, Wood (The Shock of the Real), professor of English at the University of Illinois, remedies this oversight, combining a scientific introduction to volcanism with a vivid account of the eruption's cultural, political, and economic impact that persisted throughout the century."—Publishers Weekly

"Wood broadens our understanding beyond the 'year without a summer' cliché. . . . Wood's command of the scientific literature is impressive, and more than matched by his knowledge of world history during this horrific episode of catastrophic global climate change. With the mass of information he has assimilated, he skillfully weaves a tale full of human and cultural interest."—Ted Nield, Nature

"The book is fluently-written, tightly constructed around a single event and a short time period, filled with interesting anecdotes about both well-known and obscure people, places, and evetns, and connects less-than-obvious dots. . . . [F]ascinating and easy-to-read. . . . Tambora is also interesting as a timely reminder of how interconnected our world is."—Peter Gordon, Asian Review of Books

"[Tambora's] portentous lessons on the consequences of global climate disturbances, is told with particular élan and a flair for the dramatic in Gillen D'Arcy Wood's Tambora: The Eruption That Changed the World. . . . Wood uncovers for the reader the worldwide reaches of the eruption and makes it a watershed date in the timeline of human history."—William O'Connor, The Daily Beast

"Even Westerners who were aware of the occasional spewings of Italy's Mount Vesuvius (much smaller eruptions that didn't change climate at all) had no idea what a volcano on the other side of the globe was capable of doing. Today, Wood . . . can put it into a worldwide context of environmental and social upheaval."—Nancy Szokan, Washington Post

"[T]his is a subject worthy of much thought. Tambora is the most far-reaching account of it yet, and D'Arcy Wood deserves a wide and serious readership for his audacious book . . . a grand case study. . . . It is a brave literary scholar who taken on volcanology, meteorology, epidemiology, glaciation and global economics. Gillen D'Arcy Wood has done so judiciously and shown the power of literature to work as a guiding principle among them."—Alexandra Harris, Literary Review

"Wood's compelling and at times terrifying 'cautionary tale' details the global effects of the April 1815 volcanic eruption of Mount Tambora in Indonesia. . . . This extremely detailed work draws together disparate events in a fascinating way. It's in-depth enough for climate science students and offers something different for those wishing to know more about romantic literature; at the same time the work is accessible for popular-science readers. For large public libraries and academic collections."—Henrietta Verma, Library Journal

"Too often, the claim that a book is tackling a subject 'that changed the world' is pure hyperbole. Not in this case, however. . . . Gillen D'Arcy Wood offers up this fascinating story of Tambora as a cautionary tale about what might lie ahead of us—a tale that, like Frankenstein, warns against the consequences of technological hubris."—Fiona Capp, The Age

"[A] provocative book that confidently leaps from volcanology to lit crit by way of history. . . . [E]arth-shaking . . . told with gusto."—Robbie Millen, The Times

"The author's command of the scientific literature is impressive and more than matched by his knowledge of world history during this horrific episode of catastrophic global climate change. Through the mass of information he has assimilated, he skilfully weaves a take full of human and cultural interest. . . . This book is much more than just a piece of brilliant popular science. Drawing together a world of data relating to this epoch-changing eruption, Wood has made a major contribution to volcanology, climatology and cultural history, in a writer's quest that was clearly driven by a deep personal passion and conviction."—Ted Nield, Geoscientist Magazine

"Gillen D'Arcy Wood tells this story with skill and convincing research in Tambora: The Eruption that Changed the World, bringing together science, historic records and anecdotes from 200 years ago. . . . Wood delivers an intriguing anecdote of historical science, describing how humans are oblivious to the links to nature all around us."—Matthew Scott, South China Morning Post

"In Tambora: The Eruption That Changed the World, Gillen D'Arcy Wood weaves a story that Shelley and Byron could not have told, because they could not have known it. Behind the killing weather and the noonday dark was the largest volcanic eruption in recorded history. . . . Wood makes compelling use of literature as a stand-in for the voiceless throngs crushed in this disaster."—Jenni Laidman, Chicago Tribune

"This beautifully written book successfully bridges the divides separating science, the arts and social history, to give us an enthralling illustration of the devastation brought about by alterations in global climate that, in fact, lasted for only three years."—Anthony Toole, Amazon.co.uk

"In example of example, Wood expertly explains the volcano's effects on climate and agriculture. . . . Wood leaves no doubt how sensitive and far-reaching Earth's climate system is—and how vulnerable humans are to the natural world."—Science News

"His remarkable, even pioneering, book is the first to discuss the Tambora eruption as a global phenomenon afflicting Asia as well as Europe and America."—Andrew Robinson, Journal of the Royal Asiatic Society

"Wood does not present this eruption as a case of crude environmentalism but as a case study in the fragile interdependence of human and natural systems."—Wan Lixin, Shanghai Daily

"Here, Wood comprehensively looks at all these effects, unearthing much previously ignored historical data from around the world and showing how they were all an outgrowth of this earthshaking eruption. In all, it is a remarkable compilation of formerly unconnected information. The text reads almost like an adventure novel, and yet everything is well documented."—Choice

"[A] fascinating account of just how much havoc one volcano can wreak."—Alison Stokes, Times Higher Education

"Wood's book is extraordinary in its global scope and interdisciplinarity. . . . Wood not only grapples with climate change's history, but also offers a model for how humanistic scholars can engage with climate change now and in the future."—Scott Hess, ISLE

"D'Arcy Wood incorporates material that was previously little known, making it easier to grasp the enormity of the environmental changes that affected the health and well-being of a significant segment of humankind. In a fluent and erudite style, D'Arcy shows clearly how several tragedies resulted from the interaction and convergence of the abysmal weather and preexisting natural (the Little Ice Age), socioeconomic, and/or political conditions. By not oversimplifying but emphasizing the complexity of this global event, he has made this book an important resource for those interested in environmental history."—Jelle Zeilinga de Boer, Environmental History

"Wood intricately weaves literary works, scientific data, and anecdotal evidence to create a gripping account of the worldwide event and the ‘Year without a Summer' that followed in 1816."—Jonathan Abel, H-Net Reviews

"This is not the first book to be published on the Tambora eruption of 1815. However, this beautifully written and constructed, engaging and entertaining book is, in my opinion, by far the best on the subject, and I highly recommend it."—Graham Denyer, Weather

"Tambora offers at once fine history and important witness: we can ill afford to underestimate the destabilizing potential of climate change. . . . Tambora is clear and well researched, and the book flows well. It is passionate and in places even humorous."—Conevery Bolton Valencius, ISIS Review

"I learned an awful lot from this book, about a number of subjects that, on reading the title, I wouldn't have expected. . . . Wood has done a worthy job of portraying the human suffering caused by, in this case, a short-lived global climatic shift."—John Brittan, The Leading Edge

"Gillen D'Arcy Wood's Tambora takes us on a fascinating journey through the world of 1815-17, when particles from the greatest volcanic eruption since the Ice Age lingered high in the atmosphere. This meticulously researched and beautifully written book ventures far beyond tales of Mary Shelley and Frankenstein to document an apocalyptic global catastrophe that affected millions of people living as far afield as the Arctic and North America. Wood has crafted a powerful, definitive, and thought-provoking narrative."—Brian Fagan, author of The Attacking Ocean

"Stimulating and engaging, Tambora provides an excellent overview of the worldwide repercussions that followed the eruption of a single tropical volcano. Weaving together an abundance of newly gathered historical information, Wood emphasizes humanity's disquieting vulnerability to natural events. This book represents a marvelous piece of work."—Jelle Zeilinga de Boer, coauthor of Volcanoes in Human History: The Far-Reaching Effects of Major Eruptions

"Wood makes the compelling case that the global effects of the Tambora eruption have been largely underappreciated—and the strength of his argument rests on the accumulation of evidence. Tambora is a rude awakening to the potential societal consequences of these fascinating geological events."—Guilherme Gualda, Vanderbilt University

"Tambora is a thought-provoking and original synthesis by an esteemed scholar that draws together vast amounts of previously unrelated material."—James Rodger Fleming, author of Fixing the Sky: The Checkered History of Weather and Climate Control