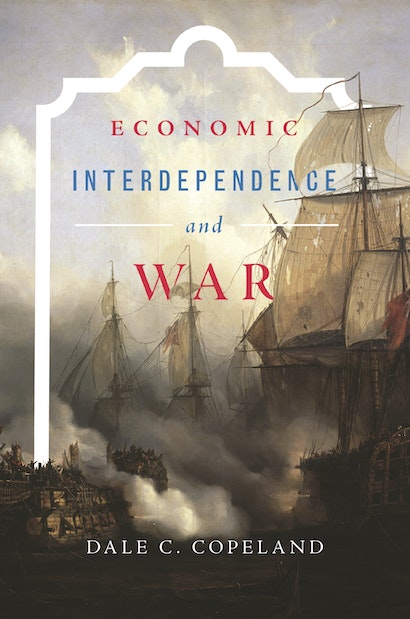 Does growing economic interdependence among great powers increase or decrease the chance of conflict and war? Liberals argue that the benefits of trade give states an incentive to stay peaceful. Realists contend that trade compels states to struggle for vital raw materials and markets. Moving beyond the stale liberal-realist debate, Economic Interdependence and War lays out a dynamic theory of expectations that shows under what specific conditions interstate commerce will reduce or heighten the risk of conflict between nations.

Taking a broad look at cases spanning two centuries, from the Napoleonic and Crimean wars to the more recent Cold War crises, Dale Copeland demonstrates that when leaders have positive expectations of the future trade environment, they want to remain at peace in order to secure the economic benefits that enhance long-term power. When, however, these expectations turn negative, leaders are likely to fear a loss of access to raw materials and markets, giving them more incentive to initiate crises to protect their commercial interests. The theory of trade expectations holds important implications for the understanding of Sino-American relations since 1985 and for the direction these relations will likely take over the next two decades.

Economic Interdependence and War offers sweeping new insights into historical and contemporary global politics and the actual nature of democratic versus economic peace.

Dale C. Copeland is an associate professor in the Department of Politics at the University of Virginia. He is the author of The Origins of Major War.

"This bold, well-written, and landmark work draws together the fields of international political economy and security studies. It also illuminates modern international history and the future."—Choice

"[A] stimulating and penetrating book. . . . A landmark contribution to the ongoing debate on the relationship between interdependence and peace."—Jack Snyder, International Security

"Economic Interdependence and War is international relations on a gigantic scale. Copeland asks big questions, makes big arguments, engages big alternatives, and tests them all on big powers over a big time span. . . . Books like this one are a healthy reminder that there remains trenchant things to say about the big picture. . . . A work of passion, conviction, and erudition."—Joseph Parent, Perspective on Politics

"This book provides a novel, nuanced and highly illuminating examination of the relationship between economic interdependence and war. . . . The book's central arguments and findings will also be of clear interest and importance for current and future policy makers as they seek to grapple with the long-term effects of increasing economic interdependence."—Stephen Ellis, Political Studies Review

"This landmark book makes bold arguments and parallel big achievements. On theoretical front, the book succeeds in presenting that as an amalgam of liberal and realist approaches, future trade expectation theory has a significant deductive and explanatory power. On empirical front, the book is one of the best case studies that go in depth based on the diplomatic-historical evidence among the existing large-N quantitative empirical studies."—Hakan Mehmetcik, Journal of Global Analysis

"Copeland is a refreshing book . . . most of all because it offers a possibility to reconcile and balance the traditional realist and liberal insights at the level of broad intuitions."—Massimo Morelli and Tommaso Sonno, Journal of Economic Literature

"A landmark study, Economic Interdependence and War presents a novel and compelling argument about trade expectations and the prospects for peace and war among the great powers. This well-written and accessible book buttresses its argument with an extraordinarily valuable historical analysis of great-power interactions from the 1790s to the present day, and a superior intellectual engagement of the quantitative literature."—Joseph Grieco, Duke University

"Economic Interdependence and War is an extraordinary accomplishment. This magisterial work, by one of the leading scholars of international relations, brings together theory, history, and quantitative data to demonstrate the critical role economic relations play in the 'high politics' of war and peace. The evidence Copeland produces is fascinating and his argument is provocative and forceful."—Michael Mastanduno, Dartmouth College

"This impressive and important book has a serious historical backbone, a relentlessly analytical approach, and grand theoretical ambition. It joins the canon of books in international relations that explore the crucial questions arising from the intersection of international security and international political economy."—Timothy Crawford, Boston College

"Making big arguments about theory, methodology, and history, this bold and original book will be controversial and widely argued over. It is certain to be adopted for classroom use and generate lots of research, engaging security-oriented political scientists, those interested in international political economy, as well as economically and diplomatically minded historians." —Francis J. Gavin, Massachusetts Institute of Technology