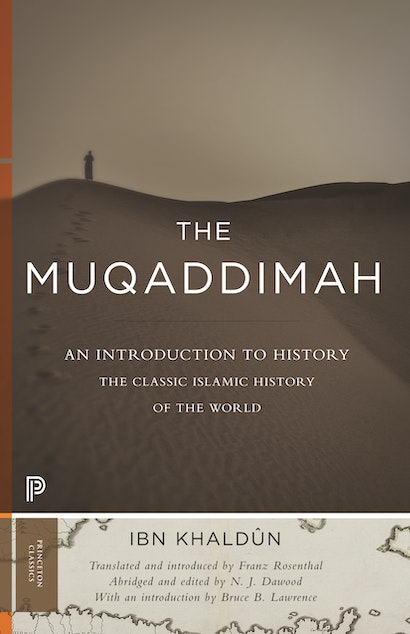 The Muqaddimah, often translated as “Introduction” or “Prolegomenon,” is the most important Islamic history of the premodern world. Written by the great fourteenth-century Arab scholar Ibn Khaldûn (d. 1406), this monumental work established the foundations of several fields of knowledge, including the philosophy of history, sociology, ethnography, and economics. The first complete English translation, by the eminent Islamicist and interpreter of Arabic literature Franz Rosenthal, was published in three volumes in 1958 as part of the Bollingen Series and received immediate acclaim in the United States and abroad. A one-volume abridged version of Rosenthal’s masterful translation first appeared in 1969.

This Princeton Classics edition of the abridged version includes Rosenthal’s original introduction as well as a contemporary introduction by Bruce B. Lawrence. This volume makes available a seminal work of Islam and medieval and ancient history to twenty-first century audiences.

"Ibn Khaldûn, the great 14th-century Arab scholar, is the most authoritative and most beguiling of Arabic polymaths…. His learning and ideas have an astonishingly modern relevance. His encyclopaedic work is a wonderfully readable mixture of history, sociology, ethnography, economics, science, art, literature, cookery, and medicine."—Iain Finlayson, Times

"[The] most remarkable book written during the entire Middle Ages, one of the great intellectual achievements of all time."—Virginia Quarterly Review

"From review of Princeton's original edition: "[N. J. Dawood] has, by skillful abridgement and deft but unobtrusive editing, produced an attractive and manageable volume, which should make the essential ideas of Ibn Khaldûn accessible to a wide circle of readers.""—Times Literary Supplement

"From review of Princeton's original edition: "Undoubtedly the greatest work of its kind that has ever been created by any mind in any time or place . . . the most comprehensive and illuminating analysis of how human affairs work that has been made anywhere.""—Arnold J. Toynbee, Observer