The first history of the new deal in global context 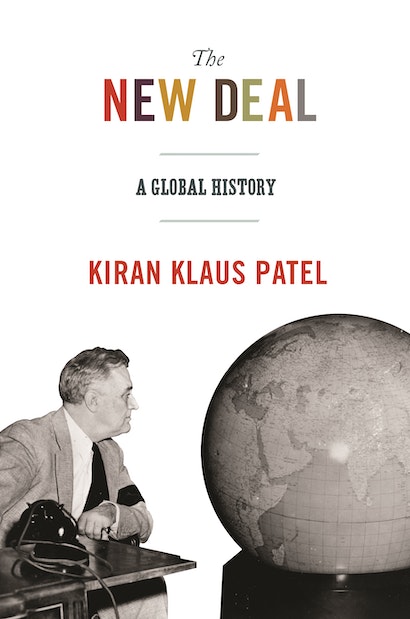 The New Deal: A Global History provides a radically new interpretation of a pivotal period in US history. The first comprehensive study of the New Deal in a global context, the book compares American responses to the international crisis of capitalism and democracy during the 1930s to responses by other countries around the globe—not just in Europe but also in Latin America, Asia, and other parts of the world. Work creation, agricultural intervention, state planning, immigration policy, the role of mass media, forms of political leadership, and new ways of ruling America’s colonies—all had parallels elsewhere and unfolded against a backdrop of intense global debates.

By avoiding the distortions of American exceptionalism, Kiran Klaus Patel shows how America’s reaction to the Great Depression connected it to the wider world. Among much else, the book explains why the New Deal had enormous repercussions on China; why Franklin D. Roosevelt studied the welfare schemes of Nazi Germany; and why the New Dealers were fascinated by cooperatives in Sweden—but ignored similar schemes in Japan.

Ultimately, Patel argues, the New Deal provided the institutional scaffolding for the construction of American global hegemony in the postwar era, making this history essential for understanding both the New Deal and America’s rise to global leadership.

Kiran Klaus Patel is the Jean Monnet Professor of European and Global History at Maastricht University in the Netherlands. His books include Soldiers of Labor: Labor Service in Nazi Germany and New Deal America, 1933–1945, and he has edited a number of volumes, including The United States and Germany during the Twentieth Century.

"Patel's story will become the definitive account. . . . An impressive, thought-provoking narrative of the New Deal. . . . Patel raised important questions for historians to consider as they continue to grapple with this period of American history and as they, more generally, attempt to argue when and how the global matters."—Meg Jacobs, American Historical Review

"Impressive. . . . Patel traces with unprecedented detail the intense international exchange and ‘transnational learning and linking' that shaped the Roosevelt administration's responses to the global crisis of capitalism and democracy in the 1930s."—Ira Katznelson, Foreign Affairs

"A compelling argument that is profoundly relevant to the twenty-first century."—Glenn C. Altschuler, Huffington Post

"Those in search of an up-to-date New Deal primer that pays special attention to international connections will find Patel's results extremely useful. The book’s fantastic bibliography alone, covering works in no fewer than seven languages, is worth the price of the volume."—Brooke L. Blower, Journal of American History

"A deep, scholarly dive into the New Deal"—Kirkus

"Patel presents exhaustive and valuable factual comparisons of the New Deal with various other country policies in the 1930s."—Choice

"A rich account of facts that shows in detail the unfolding and the impact of the New Deal."—Stefano Solari, History of Economic Thought and Policy

"Patel's contribution is largely in his mastery of many national historiographies and his ability to compare them. When he discusses the diffusion of punch card data management through public administrations around the world, for example, he gives a fascinating view of the development of parallel governmentalities in different national contexts."—Gabriel Winant, Reviews in History

"This global history of the New Deal succeeds in its attempt to re-frame U.S. history of the 1930s and after in a transnational setting. Patel is particularly strong when dealing with matters of diplomacy and economics where he demonstrates a profound knowledge of both primary sources and secondary literature."—Olaf Stieglitz, H-Net

"This book is essential reading for all scholars of the interwar period. They will study it with pleasure and profit."—Peter Fearon, Journal of Global History

"Kiran Klaus Patel's The New Deal is excellent in detailing how U.S. developments fit into a world picture. . . . This volume will provide an essential reference work for historians of the period."—Christopher Bliss, The European Legacy

"In pursuing this transnational approach, Patel is clearly broadening our perspective in much the same way as did a generation of scholars before him who also avoided a national perspective but - turning toward another direction - chose a more local or regional focus instead. . . . This global history of the New Deal succeeds in its attempt to re-frame U.S. history of the 1930s and after in a transnational setting."—Hsozkult

"Patel's book is both a comprehensive overview of the New Deal and a studious effort to place it within a global context. As an overview history of the New Deal, it is one of the best volumes that I have read."—Brian Kennedy, European Journal of American Culture

"This is an ambitious book that offers a balanced and thoughtful critique of the New Deal on the basis of a perceptive analysis of its international dimensions."—Axel R. Schäfer, History

"The first book to globalize the history of the New Deal, this is an amazing tour de force with fresh insights on virtually every page. Many historians will wish they had written it."—Akira Iriye, Harvard University

"This indispensable book reveals the national, comparative, and global dimensions of the Great Depression and New Deal. Attentive to the global circuitry of policy options and supported by a vast knowledge of other national responses, Kiran Klaus Patel transforms our understanding of the formation and nationalist shape of the New Deal. One cannot claim to understand the New Deal without reading this book."—Thomas Bender, author of A Nation Among Nations: America's Place in World History

"Kiran Klaus Patel boldly advances the effort to transnationalize historians' understanding of the New Deal, convincingly demonstrating the need to understand the United States in the 1930s as embedded in a larger world confronting a shared crisis. This formidable book decisively challenges exceptionalist claims about mid-twentieth-century reform in the United States."—Paul A. Kramer, author of The Blood of Government: Race, Empire, the United States, and the Philippines

"A stunning world tour, full of surprises and insights into government action in the 1930s in many nations and across a vast policy terrain. This is comparative and transnational history at its best."—Gary Gerstle, author of Liberty and Coercion: The Paradox of American Government from the Founding to the Present

"The New Deal is usually thought of as a quintessentially American historical moment. But as Kiran Klaus Patel's penetrating book shows, it was also a deeply international event, both in terms of Americans transmitting their ideas abroad as well as importing innovations from often-unexpected places around the world. Insightful and original, The New Deal: A Global History will challenge preconceptions and change the way we perceive a seminal moment in world history."—Andrew Preston, University of Cambridge

"Kiran Klaus Patel provides a strikingly broad and comprehensive treatment of the New Deal and brings a remarkable range of global knowledge to bear on the subject. An extraordinary mine of information, this unique and valuable book will be an indispensable reference point in future debates over the global 1930s."—Daniel T. Rodgers, professor emeritus, Princeton University

"An astute, powerfully synthetic global history of the New Deal, this book covers a vast terrain, substantively and geographically, blending a discerning reading of the enormous literature on the New Deal with judiciously targeted primary research. The result is a fresh perspective on the global dimensions of innovation within the American state—and a book for which there is an overwhelming need."—James Sparrow, University of Chicago