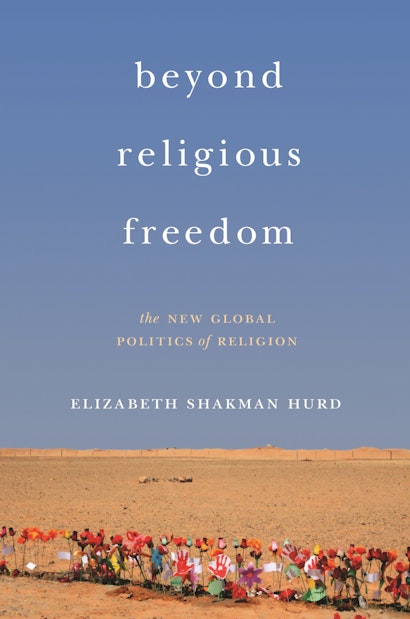 In recent years, North American and European nations have sought to legally remake religion in other countries through an unprecedented array of international initiatives. Policymakers have rallied around the notion that the fostering of religious freedom, interfaith dialogue, religious tolerance, and protections for religious minorities are the keys to combating persecution and discrimination. Beyond Religious Freedom persuasively argues that these initiatives create the very social tensions and divisions they are meant to overcome.

Elizabeth Shakman Hurd looks at three critical channels of state-sponsored intervention: international religious freedom advocacy, development assistance and nation building, and international law. She shows how these initiatives make religious difference a matter of law, resulting in a divide that favors forms of religion authorized by those in power and excludes other ways of being and belonging. In exploring the dizzying power dynamics and blurred boundaries that characterize relations between “expert religion,” “governed religion,” and “lived religion,” Hurd charts new territory in the study of religion in global politics.

A forceful and timely critique of the politics of promoting religious freedom, Beyond Religious Freedom provides new insights into today’s most pressing dilemmas of power, difference, and governance.

Elizabeth Shakman Hurd is associate professor of political science at Northwestern University. She is the author of The Politics of Secularism in International Relations (Princeton) and the coeditor of Comparative Secularisms in a Global Age and Politics of Religious Freedom.

"[This] book deserves a wide readership. . . . Hurd brings a theoretically sophisticated understanding of 'religion' to an area of study traditionally conducted by those in political science or international affairs. . . . Ideal for use in the classroom."—Michael Graziano, Religion in American History blog

"Maybe Hurd is amongst the ‘experts' that the ‘governed' or rather governors are listening to. If not, they might pick up this book."—Stewart Rayment, Interlib

"This book represents a profound and meticulously documented argument for the unavailability of religion for projects of moderation, division, and bifurcation into good and bad religion. . . . It will make an excellent reading for undergraduate and graduate courses on Islam, Secularism, and Modernity, Middle Eastern Politics, religion and politics, and on theories and methods in Religion Studies."—History News Network

"This book is not a trade wind but a typhoon. In Heisenbergian ways, it does not just observe; it intervenes in an entire field of activism, policy, and scholarship."—Benjamin Schonthal, The Immanent Frame

"A signpost book, and the directions it provides are more precise than merely ‘beyond.' It guides the reader through approaches to religion in IR theory, charts original maps of complex situations of inequality, and sets the landmark for critical analysis, which future debates in the field can effectively build on."—Kristina Stoeckl, St. Antony's International Review

"A timely and compelling critique of the burgeoning prevalence of religion as normative and analytical category in both global politics and academia. . . . The compelling push to systematically destabilize religion as a political category and to normatively think beyond religious freedom makes this book an outstanding contribution for those with an interest in the intricate relationships of religion and global politics."—Tobias Müller, Political Theory

"In sum, [Beyond Religious Freedom] is a fascinating critique of the advocacy of religious freedom on the part of global political actors. . . . Hurd’s invitation to think ‘beyond religious freedom’ will hopefully generate a rich and ground-breaking debate on the nexus between religion and global politics."—Gowhar Quadir Want, Muslim World Book Review

"The defense and violation of religious freedom are intensely politicized but poorly understood. Hurd provides an important intellectual and practical service with this thoughtful and well-researched examination of the issues."—Craig Calhoun, director and president of the London School of Economics

"In this brilliantly argued book, Hurd shows why the stakes are very high and the dangers very real when governments set the standards for religious practice. Beyond Religious Freedom is intellectually courageous and deeply grounded in religious as well as political theory. There is simply no better guide to the contemporary global religious landscape."—Robert Orsi, Northwestern University

"In this important book, Elizabeth Shakman Hurd shows how the suffocatingly tautological language of policymakers today constructs religion and religious freedom as both problem and solution in the context of myriad challenges facing the world community. Mobilized alternatively to underwrite good religion on behalf of an agenda of reassurance and to thwart bad religion on behalf of an agenda of surveillance, religious freedom is repeatedly discovered to be the indispensable condition for peace in our times, always available to short-circuit understanding of complex social situations."—Winnifred Fallers Sullivan, author of The Impossibility of Religious Freedom

"Beyond Religious Freedom tackles a crucial topic, is compellingly structured, and has a powerful and highly critical line of argument. I learned an enormous amount from this fascinating book."—Christian Reus-Smit, author of Individual Rights and the Making of the International System

"This is a compelling, stimulating, and original book. Hurd argues that powerful Western democracies promote religious freedom in other societies in ways that privilege standard, recognized religious groups and marginalize personal religious or cultural practices that don't fit the model. Beyond Religious Freedom deals with a timely, politically charged topic in a thoughtful and well-informed way."—Jack Snyder, author of Power and Progress: International Politics in Transition