For the first time, novelist Iris Murdoch's life in her own words, from girlhood to her last years 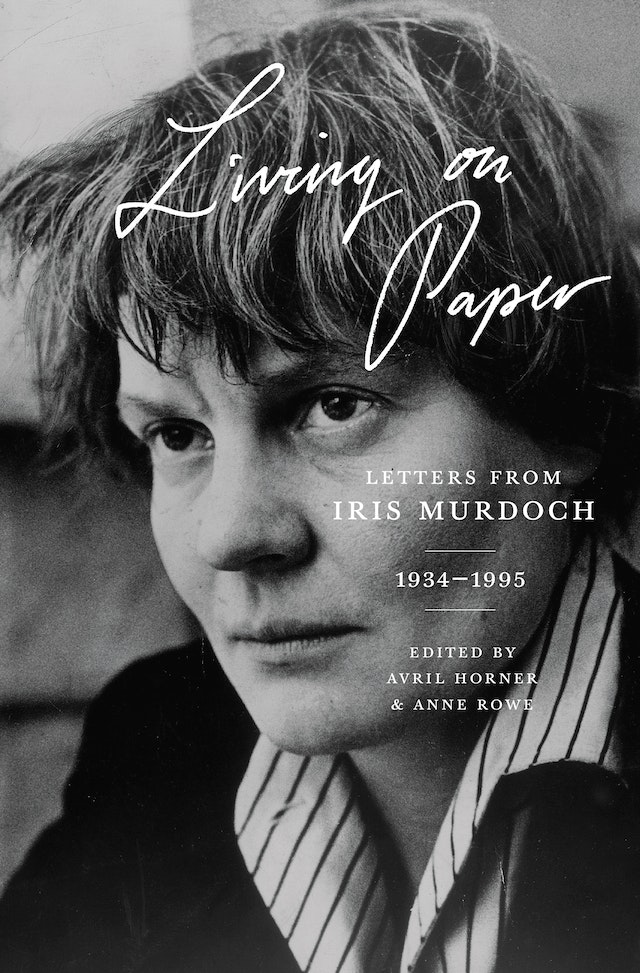 Iris Murdoch was an acclaimed novelist and groundbreaking philosopher whose life reflected her unconventional beliefs and values. But what has been missing from biographical accounts has been Murdoch’s own voice—her life in her own words. Living on Paper—the first major collection of Murdoch’s most compelling and interesting personal letters—gives, for the first time, a rounded self-portrait of one of the twentieth century’s greatest writers and thinkers. With more than 760 letters, fewer than forty of which have been published before, the book provides a unique chronicle of Murdoch’s life from her days as a schoolgirl to her last years. The result is the most important book about Murdoch in more than a decade.

The letters show a great mind at work—struggling with philosophical problems, trying to bring a difficult novel together, exploring spirituality, and responding pointedly to world events. They also reveal her personal life, the subject of much speculation, in all its complexity, especially in letters to lovers or close friends, such as the writers Brigid Brophy, Elias Canetti, and Raymond Queneau, philosophers Michael Oakeshott and Philippa Foot, and mathematician Georg Kreisel. We witness Murdoch’s emotional hunger, her tendency to live on the edge of what was socially acceptable, and her irreverence and sharp sense of humor. We also learn how her private life fed into the plots and characters of her novels, despite her claims that they were not drawn from reality.

Direct and intimate, these letters bring us closer than ever before to Iris Murdoch as a person, making for an extraordinary reading experience.

Iris Murdoch (1919–99) was a British writer and philosopher. Her twenty-six novels include the Booker Prize–winning The Sea, the Sea. Avril Horner and Anne Rowe are the coeditors of Iris Murdoch: Texts and Contexts and Iris Murdoch and Morality.

"Anyone who misses the regular appearance of new Murdoch novels will find plenty to enjoy and admire in these letters. They pitch us back into her cerebral yet vaguely surreal and magical intellectual world."—Dwight Garner, New York Times

"Readers come closer to Iris Murdoch—the writer, the friend, the lover, the person—than either Peter Conradi's official biography or [John] Bayley's memoirs allowed. . . . It's this Iris Murdoch—compulsively discursive, doggedly happy—who dominates Living on Paper and fills it with the kind of smart, nimble-footed small talk that is always the principal joy of reading letter collections."—Steve Donoghue, Christian Science Monitor

"[A] treasure trove…. The letters are fervent, philosophical, frenetic and witty; they suggest sources, from her own life, for the varied portraits of obsessive desire in her novels."—Rivka Isaacson, Independent

"My favorite read of 2016. . . . But what about those weird novels? A Severed Head? The Bell? Bruno's Dream? The Nice and the Good? The Sea, the Sea? And so-the-so-on? Addictive, hilarious: pure intellectual crystal meth. If, like me, you've read them all, you'll hoover these letters up at once."—Terry Castle, Artforum

"Perhaps the best thing about Living on Paper is the portrait of Murdoch that emerges."—Becca Rothfeld, The Nation

"An intimate view of the prolific British novelist and philosopher. . . . With their deep knowledge of Murdoch's life and work, the editors have produced an authoritative, readable, and informative volume that contextualizes the writer's vibrant, intense, and sometimes slyly witty correspondence. . . . An impressively edited, sharply revealing life in letters."—Kirkus

"[A]n unprecedented exposure of the heart and mind of a major novelist and thinker (the author of 26 novels and three major works of philosophy) and a woman who lived a life of unusual intellectual and personal freedom."—Ann Chisholm, Prospect

"'I am an indefatigable letter writer', Iris Murdoch wrote to a friend in 1968. 'I am pretty good at conversation by letter'. A new, insightful book, Living on Paper: Letters from Iris Murdoch 1934-1995 testifies that she was right on both counts."—Malcolm Forbes, The National

"Intimate, learned, generous, stern and flirtatious. . . . [Living on Paper] begins when [Iris Murdoch] is 15 . . . and ends, heart-wrenchingly, with her struggling through Alzheimer's to write a valued friend. . . . In between is an epic, epistolary 20th-century adventure."—Nicholas Köhler, Maclean's

"Living on Paper is a revelatory and exquisitely insightful read in its totality, brimming with Murdoch's uncommon sincerity and shrewdness."—Maria Popova, Brain Pickings

"Avril Horner . . . and Anne Rowe . . . allow Murdoch, who struggled with Alzheimer's in the 1990s, to speak in her own voice. [Living on Paper] provides fascinating insights into her philosophy and, most of all, into her immensely complicated personal life. Murdoch's many fans are in for a treat. . . . [A] superb volume."—Glenn Altschuler, San Francisco Chronicle

"[A] handsome and well-edited volume. . . . As well as indicating [Iris Murdoch's] philosophical enthusiasms, the letters also trace her spiritual and political trajectories from apprentice existentialist to Christian-Buddhist mystic and from zealous Communist Party member to Margaret Thatcher supporter, making Living on Paper a noteworthy contribution to the intellectual and cultural history of postwar England."—George O'Brien, American Scholar

"The years since Murdoch's death in 1999 haven't lacked for biographical portraits of her. . . . Living on Paper represents something fresh, though: a composite picture of the author formed through her own words to friends, lovers, colleagues, and students. . . . The volume's real value . . . lies in its illumination of the complexity of Murdoch's identity and relationships, which, it's clear, fed both her fiction and her thought in fruitful ways. . . . The letters show her from multiple angles: variously bantering, serious, generous, retrograde then progressive, arrogant then painfully doubting her own abilities."—Alex Roman, PopMatters

"Spanning 60 years and including more than 700 letters, this collection reveals the contours of Murdoch's personality and her important friendships. . . . Readers will be introduced to many of Murdoch's longtime correspondents from her early days as a student, communist activist, and United Nations Relief and Rehabilitation worker, and they will see those relationships develop throughout her career."—Choice

"The selection of letters is lively and varied. It is preceded by a lucid introduction about Murdoch's writing career, suggests ways in which her experiences flowed into the novels and deals judiciously with the apparently paradoxical contrasts between the moral idealism of the novels and philosophy and the promiscuity of her personal life."—Priscilla Marti, London Magazine

"What this eye-opening collection of letters does is to give us a fuller picture of an extraordinary person who led a passionately intense and painfully complex life."—Cassandra Langer, Gay & Lesbian Review

"This collection of letters provides a fascinating insight into the life of a complex and important novelist. It is a wonderful book."—Alexander McCall Smith

"I remember seeing Iris Murdoch toward the end of her life at a party: despite her illness, her expression was joyous, serene, and intent—almost Buddha-like. These qualities come through strongly in this remarkable collection of letters. We find a passionate engagement with the world of ideas, but most of all with friends, lovers, and pupils. These letters reveal Murdoch's extraordinary talent for affection, exuberant sense of fun, razor-sharp intelligence, and acute awareness of the transcendent."—Karen Armstrong, author of The Spiral Staircase

"Few writers comprehend the murky human messiness of desire like Iris Murdoch, or could plot like her, and these letters show us why. Her life—the multiple lovers, the emotional strain, the terrible food, the nuns and prizes and philosophy—was chaos. She'll always be my favorite writer; now I understand why."—Charlotte Mendelson, author of When We Were Bad

"Reading these letters is like living Murdoch's whole creatively, sexually, and intellectually voracious life alongside her, and at breakneck speed. Thrilling."—Sarah Bakewell, author of How to Live: A Life of Montaigne