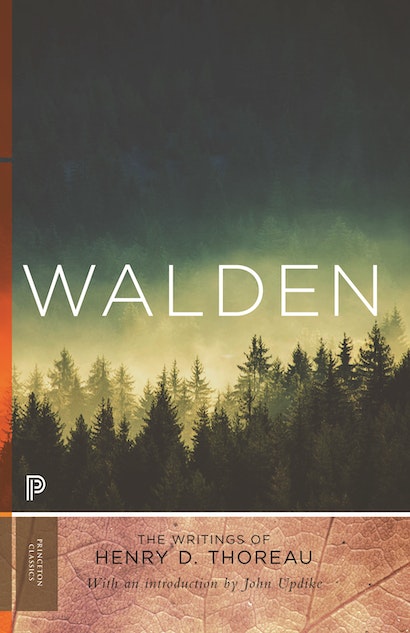 One of the most influential and compelling books in American literature, Walden is a vivid account of the years that Henry D. Thoreau spent alone in a secluded cabin at Walden Pond. This edition — introduced by noted American writer John Updike — celebrates the perennial importance of a classic work, originally published in 1854. Much of Walden’s material is derived from Thoreau’s journals and contains such engaging pieces from the lively “Where I Lived, and What I Lived For” and “Brute Neighbors” to the serene “Reading” and “The Pond in the Winter.” Other famous sections involve Thoreau’s visits with a Canadian woodcutter and with an Irish family, a trip to Concord, and a description of his bean field. This is the complete and authoritative text of Walden — as close to Thoreau’s original intention as all available evidence allows.


This is the authoritative text of Walden and the ideal presentation of Thoreau’s great document of social criticism and dissent.

Henry D. Thoreau (1817–62) was an American author, naturalist, poet, and philosopher. He wrote many essays and books, including Civil Disobedience, Walking, and The Maine Woods, among others. John Updike (1932–2009) was a Pulitzer Prize-winning novelist, short story writer, and poet.

"Walden is a self-help book, perhaps the ultimate self-help book, urging us to show up for our own lives, to have the courage to find our own convictions and to try to live them out. . . . [Thoreau is] a writer of immense humanity, vitality and humor. . . . One hundred fifty years after its publication, Walden also remains a practical, usable manual on how to lead a good, and just life. . . . At its core, Walden is about the project of personal freedom, self-emancipation, which is where all pursuits of freedom must start."—Robert D. Richardson, Smithsonian Magazine

"Each [volume] is preceded by a substantive, lively and idiosyncratic essay. . . . Together, the essays are a mini-course in Thoreau and the trends he launched in American thought."—Nancy Szokan, Washington Post Book World