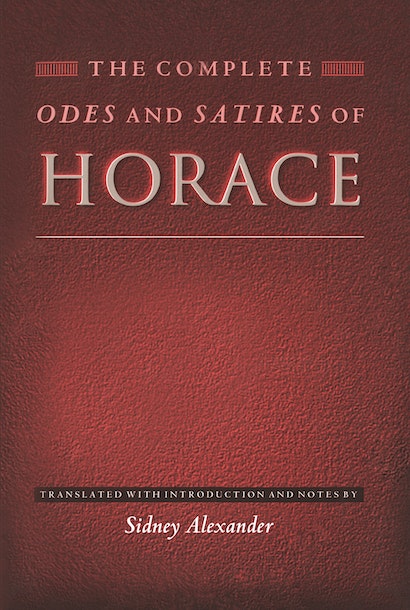 Horace has long been revered as the supreme lyric poet of the Augustan Age. In his perceptive introduction to this translation of Horace’s Odes and Satires, Sidney Alexander engagingly spells out how the poet expresses values and traditions that remain unchanged in the deepest strata of Italian character two thousand years later. Horace shares with Italians of today a distinctive delight in the senses, a fundamental irony, a passion for seizing the moment, and a view of religion as aesthetic experience rather than mystical exaltation — in many ways, as Alexander puts it, Horace is the quintessential Italian. The voice we hear in this graceful and carefully annotated translation is thus one that emerges with clarity and dignity from the heart of an unchanging Latin culture.


Alexander is an accomplished poet, novelist, biographer, and translator who has lived in Italy for more than thirty years. Translating a poet of such variety and vitality as Horace calls on all his literary abilities. Horace (Quintus Horatius Flaccus, 65-8 bce), was born the son of a freed slave in southern rural Italy and rose to become one of the most celebrated poets in Rome and a confidante of the most powerful figures of the age, including Augustus Caesar. His poetry ranges over politics, the arts, religion, nature, philosophy, and love, reflecting both his intimacy with the high affairs of the Roman Empire and his love of a simple life in the Italian countryside. Alexander translates the diverse poems of the youthful Satires and the more mature Odes with freshness, accuracy, and charm, avoiding affectations of archaism or modernism. He responds to the challenge of rendering the complexities of Latin verse in English with literary sensitivity and a fine ear for the subtleties of poetic rhythm in both languages. This is a major translation of one of the greatest of classical poets by an acknowledged master of his craft.

Sidney Alexander is the author of fifteen books on Renaissance history and art, as well as novels, poetry, plays, and criticism. The American Literary Translators Association honored his critical edition of The Complete Poems of Michelangelo as the Outstanding Literary Translation of 1991, and his edition of Guicciardini's History of Italy (Princeton paperback) received the PEN Award for Translation in 1970. His other honors include the Maxwell Anderson Award for Dramatic Composition in Verse, and special recognition from the City of Florence for his numerous writings on figures of the Florentine Renaissance.

"This new translation promises to be a grand adventure for the imaginations of graduates, undergraduates, and general readers."—Choice

"Alexander's translations of the satires are unusually readable. . . . They project an image of the poet as a Socratic loner, edgy, irritable, ultimately at odds with the city he loves. . . . But having rendered the satires and the odes in one go, Alexander allows us glimpses of a more subtle Horace."—Tom D'Evelyn, The Boston Book Review

"Alexander's translations are accurate yet vigorous and fluent, avoiding both archaisms and contemporary idioms."—Library Journal