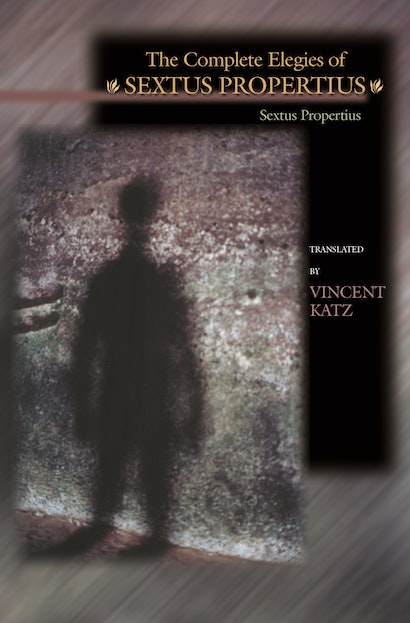 The Roman poet Propertius is best known as the writer who perfected the Latin love elegy, a technical as much as a psychological and cultural feat. Propertius has been admired for both his metrical genius and the modernity of his narrative flow.


Many of the poems here pay tribute to Cynthia, Propertius’s romantic obsession, but the scope of these 107 elegies is broad. Propertius’s poetry offers a fascinating look into life in the Augustan age, addressing social, political, and historical subjects. A contemporary of Virgil and Horace, Propertius has influenced scores of poets — from Ovid to Housman to Pound.


His poetry appears here for the first time in a dual-language edition with the translations facing the original Latin. Rendered into English by a poet who is also one of the nation’s pre-eminent Propertius experts, the volume brings Propertius’s difficult mix of vernacular and high literary allusion into contemporary language.


Cynthia was the first. She caught me with her eyes, a fool
who had never before been touched by desires.
Love cast down my look of constant pride,
and he pressed on my head with his feet,
until he taught me to despise chaste girls,
perversely, and to live without plan.
Already, it’s been a whole year that the frenzy hasn’t stopped,
when, for all that, the gods are against me.
?

Vincent Katz is a poet, translator, art critic, and curator. He is the author of Charm, translations from the Latin of book I of the elegies of Sextus Propertius, as well as eight books of original poetry.

"It is good to have these supple, lucid renderings of Propertius which well capture the complexity of his brilliant elegies through another artist's virtuosity. Katz's translation should do much to preserve the reputation of one of Rome's most important and powerful poets for the present generation and beyond."—Michael C. J. Putnam, Brown University

"This work is a consummate labor of love, which has managed to translate the ageless sophistication of the Roman poet Propertius (50 to 16 BC) into the distracted dissonance of our own perilous times. Himself an accomplished poet, Vincent Katz has found both an idiom and a cadence specific to his master's art. The result is a wonderful, dense text of exceptional poetry, which brings Propertius back to us from the dusty shelves of history."—Robert Creeley

"Of all the great Roman poets, Propertius tends, as they say of wines, to travel least well. Where the others have frequently found themselves decently transcribed into English, Propertius—complex, insolent, heartbreaking, sardonic, brilliantly ambiguous, outrageously protean—has not. Until now. Vincent Katz has here devised for him a rich and subtle American style, one that evokes, with appropriate delicacy and power, his variety, his shifting tones and textures, his unique shimmers and shadows."—W. R. Johnson, University of Chicago