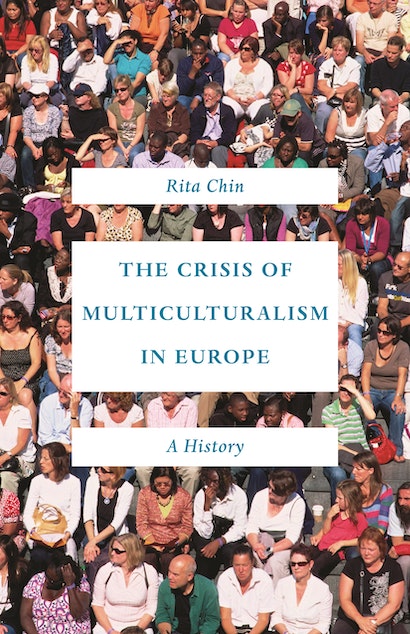 In 2010, the leaders of Germany, Britain, and France each declared that multiculturalism had failed in their countries. Over the past decade, a growing consensus in Europe has voiced similar decrees. But what do these ominous proclamations, from across the political spectrum, mean? From the influx of immigrants in the 1950s to contemporary worries about refugees and terrorism, The Crisis of Multiculturalism in Europe examines the historical development of multiculturalism on the Continent. Rita Chin argues that there were few efforts to institute state-sponsored policies of multiculturalism, and those that emerged were pronounced failures virtually from their inception. She shows that today’s crisis of support for cultural pluralism isn’t new but actually has its roots in the 1980s.

Chin looks at the touchstones of European multiculturalism, from the urgent need for laborers after World War II to the public furor over the publication of The Satanic Verses and the question of French girls wearing headscarves to school. While many Muslim immigrants had lived in Europe for decades, in the 1980s they came to be defined by their religion and the public’s preoccupation with gender relations. Acceptance of sexual equality became the critical gauge of Muslims’ compatibility with Western values. The convergence of left and right around the defense of such personal freedoms against a putatively illiberal Islam has threatened to undermine commitment to pluralism as a core ideal. Chin contends that renouncing the principles of diversity brings social costs, particularly for the left, and she considers how Europe might construct an effective political engagement with its varied population.

Challenging the mounting opposition to a diverse society, The Crisis of Multiculturalism in Europe presents a historical investigation into one continent’s troubled relationship with cultural difference.

Rita Chin is associate professor of history at the University of Michigan. She is the author of The Guest Worker Question in Postwar Germany and the coauthor of After the Nazi Racial State.

"[Chin] analyzes the current debates in Europe over immigration and Western values to create a vivid picture of a continent consumed by social tensions. The questions [she] poses have never seemed more urgent, as Europeans (and Americans) attempt to come to terms with diversity."—Radhika Jones, New York Times Book Review

"Lucidly written and resourcefully argued, [The Crisis of Multiculturalism in Europe] is a superb example of a scholarly intervention in a public debate dominated by unexamined prejudice. . . . Chin asks, ‘what exactly do Europeans imagine as a replacement for multiculturalism? How will they come to terms with multiethnic diversity moving forward?' Chin offers no simple answers, but her questions have never seemed more urgent as Europeans (and Americans) seem to move forward to their grim past."—Pankaj Mishra, New York Times Book Review

"Chin . . . has produced a well-researched and readable study of policies toward immigrant communities in Great Britain, France, and, to a lesser extent, Germany, from immediately after WWII to the present. . . . She clearly explains how the key consideration for policy makers shifted from their countries' economic conditions to fear of radical Islam. This trend started with the 1989 fatwa against Salman Rushdie and took full effect after 9/11 and the July 2005 London attacks. In a fine concluding chapter Chin notes flaws both in versions of 'multiculturalism' that foster a view of ethnic communities as homogenous and in the exclusion of immigrant minorities from national narratives."—Publishers Weekly

"[A] lucid and erudite overview of the debate."—Malise Ruthven, Financial Times

"Comparing the development of multiculturalism both within and across nation-state borders, Chin’s comprehensive account contributes greatly to our understanding of one of the most significant issues facing Europe today. . . . [It] is sure to become a leading text for scholars and teachers of contemporary Europe and global migration history."—Michelle Lynn Kahn, EuropeNow

"[Chin’s book] provides an indispensable account of multiculturalism understood as two things: the fact of demographic diversity and strategies for dealing with such a phenomenon."—Rayyan Al-Shawaf, Truthdig

"Chin, a professor of history at the University of Michigan, analyzes recent developments with nuance and against the backdrop of a European migration history that clearly shows that multiculturalism was never government policy in Germany or France and never had much backing among political elites. This hasn't stopped public opinion from blaming multiculturalism for current ills, and it has proven to be irresistible for politicians in search of a scapegoat."—Toby Vogel, Neue Zuercher Zeitung

"Rita Chin's indispensable and timely book brilliantly analyzes the ideological obfuscation involved in the claim by Western Europeans, on the right and left, that ‘multiculturalism' has failed. Instead, Chin suggests, it was never really tried. Exploring the roots of past racism and its new secularist forms today, Chin casts a sobering and troubling look at the intolerance of difference in Europe."—Samuel Moyn, author of Christian Human Rights

"A clear, incisive account of the trajectories of multiculturalism in Western Europe, Rita Chin's book is one that many of us will want to have close at hand. This is a must-read for all who are concerned with the fate of diversity in today’s Europe."—John R. Bowen, author of On British Islam

"The question of whether European societies can and should be multicultural has come to the fore in an era when the political cleavage of Left vs. Right is increasingly giving way to Open vs. Closed. Rita Chin tackles this pressing issue adroitly and comprehensively by offering a comparative analysis of several decades of debates over multiculturalism in Europe. This book is an urgent must-read for scholars and policymakers alike."—Sophie Meunier Aitsahalia, Princeton University

"There are several other books about multiculturalism in modern Europe, but none to my knowledge bring to bear the same level of historical depth and systematic comparative analysis found in Chin's excellent work. This is not only a key text in the history of multiculturalism in contemporary Europe, but it adds a new dimension to the broader history of Europe since 1945. A pleasure to read."—Tyler Stovall, University of California, Santa Cruz

"This book offers much to admire. It provides extensive coverage of a timely, important topic, and the comparative approach is original."—Jordanna Bailkin, University of Washington