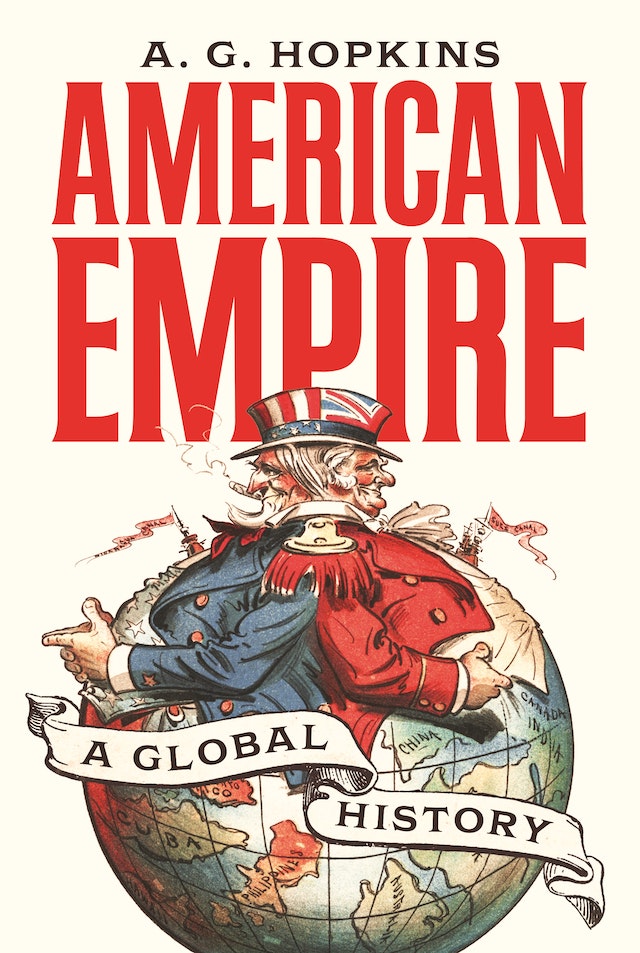 American Empire is a panoramic work of scholarship that presents a bold new global perspective on the history of the United States. Drawing on his expertise in economic history and the imperial histories of Britain and Europe, A. G. Hopkins takes readers from the colonial era to today to show how, far from diverging, the United States and Western Europe followed similar trajectories throughout this long period, and how America’s dependency on Britain and Europe extended much later into the nineteenth century than previously understood.

In a sweeping narrative spanning three centuries, Hopkins describes how the revolt of the mainland colonies was the product of a crisis that afflicted the imperial states of Europe generally, and how the history of the American republic between 1783 and 1865 was a response not to the termination of British influence but to its continued expansion. He traces how the creation of a U.S. industrial nation-state after the Civil War paralleled developments in Western Europe, fostered similar destabilizing influences, and found an outlet in imperialism through the acquisition of an insular empire in the Caribbean and Pacific. The period of colonial rule that followed reflected the history of the European empires in its ideological justifications, economic relations, and administrative principles. After 1945, a profound shift in the character of globalization brought the age of the great territorial empires to an end.

American Empire goes beyond the myth of American exceptionalism to place the United States within the wider context of the global historical forces that shaped the Western empires and the world.

"[American Empire] is a slow-burning but high-impact argument encompassing almost the entire sweep of the history of the United States from the Seven Years War to its most recent war of choice. . . . With his gift for witty summations, his serious investment in comparison, and his dispassionate outsider’s view on the pieties of American history, Hopkins has rendered the topic of American empire not merely interesting but truly compelling again."—David Armitage, Times Literary Supplement

"Hopkins is a master of storytelling on a grand scale, and the narrative abounds with moments—the little known life story of Harry Washington, one of George Washington’s slaves; the siege of British-occupied Kut, Iraq, in 1915—that resonate across the centuries. . . . This is a good book."—Publishers Weekly

"A doggedly detailed history of imperial America, beginning before the establishment of the republic and continuing to the present. . . . A definitive account of a complex subject that's hard to pin down."—Kirkus Reviews

"[I]n this immense, feisty, delightfully pugilistic book, one can’t help but appreciate [Hopkins’] intellectual fireworks, his depth of reading, and his conviction that history sits as the exacting judge of even emperors."—Joseph Fronczak, Jacobin

"Sweeping, ambitious and hugely illuminating, [this] book is surely the definitive account of perhaps the most underestimated ‘European’ empire of all."—Dominic Sandbrook, BBC History Magazine

"Compelling, provocative, and learned. This book is a stunning and sophisticated reevaluation of the American empire. Hopkins tells an old story in a truly new way—American history will never be the same again."—Jeremi Suri, author of The Impossible Presidency: The Rise and Fall of America's Highest Office

"One of the great British historians of our time reinterprets U.S. history from a truly global perspective, showing how the formation and international rise of the United States was entwined with processes of imperial expansion and global integration. This is a game-changing book that reveals as never before how the United States has fit into global patterns of historical change and development. American Empire is required reading for anyone interested in how we have arrived at our present state of international instability."—Jay Sexton, author of The Monroe Doctrine: Empire and Nation in Nineteenth-Century America

"With wit and enormous erudition, Hopkins offers us a new view on the phenomenon of the United States in global history, from its colonial origins to the Iraq War, with special attention to how it became itself a colonial power in the Caribbean and Pacific. The originality and power of American Empire begins in its demand that the United States was a postcolonial empire: it both resisted and imitated British and European power, even while it denied such influence and asserted its exceptionality. It is both a foundational work for a new American imperial history and a demonstration of how the problem of the United States can make us think in fresh ways about the broader history of empire and globalization."—Richard Drayton, author of Nature’s Government: Science, Imperial Britain, and the "Improvement" of the World

"Hopkins has written a remarkable, learned work that makes its central point well and provides numerous leads for future scholarship. He argues that American empire can be understood only within the dynamics of globalization and worldwide imperial formation and contestation. American Empire is likely to become a standard book in U.S. and world history."—Ian Tyrrell, author of Crisis of the Wasteful Nation: Empire and Conservation in Theodore Roosevelt's America

"Hopkins situates the history of the United States within a broader global history, overcoming the confines of exceptionalist thought and connecting developments in American empire to a narrative that encompasses British and European imperialism as well. This is an ambitious work."—Julian Go, author of Patterns of Empire: The British and American Empires, 1688 to the Present