They sought to transform the world, and ended up transforming twentieth-century America 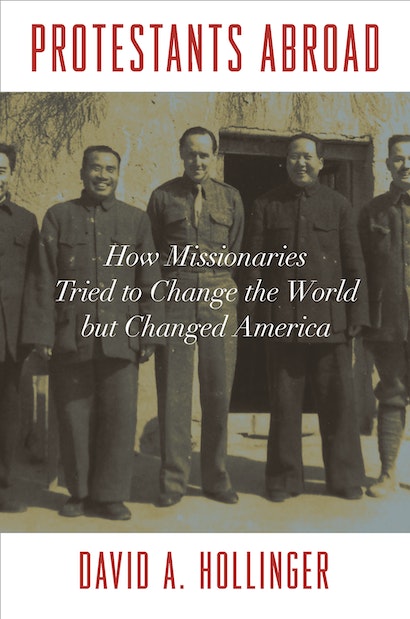 Between the 1890s and the Vietnam era, many thousands of American Protestant missionaries were sent to live throughout the non-European world. They expected to change the people they encountered, but those foreign people ended up transforming the missionaries. Their experience abroad made many of these missionaries and their children critical of racism, imperialism, and religious orthodoxy. When they returned home, they brought new liberal values back to their own society. Protestants Abroad reveals the untold story of how these missionary-connected individuals left an enduring mark on American public life as writers, diplomats, academics, church officials, publishers, foundation executives, and social activists.


David A. Hollinger provides riveting portraits of such figures as Pearl Buck, John Hersey, and Life and Time publisher Henry Luce, former “mish kids” who strove through literature and journalism to convince white Americans of the humanity of other peoples. Hollinger describes how the U.S. government’s need for citizens with language skills and direct experience in Asian societies catapulted dozens of missionary-connected individuals into prominent roles in intelligence and diplomacy. Meanwhile, Edwin Reischauer and other scholars with missionary backgrounds led the growth of Foreign Area Studies in universities during the Cold War. The missionary contingent advocated multiculturalism and anticolonialism, pushed their churches in ecumenical and social-activist directions, and joined with Jewish intellectuals to challenge traditional Protestant cultural hegemony and promote a pluralist vision of American life. Missionary cosmopolitans were the Anglo-Protestant counterparts of the New York Jewish intelligentsia of the same era.


Protestants Abroad reveals the crucial role that missionary-connected American Protestants played in the development of modern American liberalism, and how they helped other Americans reimagine their nation’s place in the world.

David A. Hollinger is the Preston Hotchkis Professor of American History Emeritus at the University of California, Berkeley. His books include After Cloven Tongues of Fire: Protestant Liberalism in Modern American History and Science, Jews, and Secular Culture: Studies in Mid-Twentieth-Century American Intellectual History (both Princeton).

"Elegant and original. . . . Hollinger's book is a comprehensive history of American Protestant missionaries abroad, but it is also the more important story of how a religious and cultural movement overcame its own provincialism."—John Kaag, Wall Street Journal

"Hollinger’s latest book, Protestants Abroad, traces the lives and activities of thousands of mainline American Protestant missionaries and, importantly, their children, from the early twentieth century into the 1960s. In its deft interweaving of personal stories and historical argument, it is the most accomplished piece of prose yet written by an exceptionally accomplished scholar."—John T. McGreevy, Commonweal

"Thoroughly researched and well crafted, this is a reminder of the influence that liberal, cosmopolitan Protestant intellectuals have had on American life."—Publishers Weekly

"Too often collected essays lack coherence—not so here. As a reader, each essay opened up new horizons of thought, but Hollinger's own intellectual drive to narrate the twists and turns between the vernacular and the ecumenical traditions of Protestantism give the volume a propinquity that is powerful. This is a superb work of scholarship, a passionate intellectual argument without spite, and an invitation to think, which is the highest compliment one can pay to a scholar."—James K. Wellman, Sociology of Religion

"Hollinger tells a fascinating and illuminating history, and I commend it highly."—Ryan Hoselton, The Gospel Coalition

"The product of prodigious research over many years. . . . This rich work casts light on such diverse subjects as the feminism of Pearl Buck . . . the interrogation of Japanese Prisoners of War in World War II, the relationship of The King and I to its purported source, and the rise of Area Studies."—John A. Thompson, H-Diplo Roundtable Review

"No one has done more than Hollinger to put mainline American Protestantism on the map of 20th-century American cultural and intellectual history, and this book adds an important chapter to that impressive legacy."—Robert Westbrook, Christian Century

"A major contribution to a wide range of subfields of American history."—Andrew Preston, American Historical Review

"Rich with illuminating portraits of persons and ideas, this analytically pointed and historically nuanced book provides a riveting look at the complex missionary project to build a global human community. Hollinger explores how this multidimensional endeavor grappled with human difference and vexing political conflicts abroad and at home, and illuminates how its principals navigated the boundaries between ‘us' and ‘them,’ the spiritual and the secular, the universal and the particular."—Ira Katznelson, author of Fear Itself: The New Deal and the Origins of Our Time

"Protestants Abroad is one of those rare books that slices American society in a way that hardly anyone—certainly no one of Hollinger's intellectual breadth—has thought to cut the cake before. He convincingly shows how the descendants of overseas missionaries have been influential far out of proportion to their numbers, and have possessed a deeper understanding than most Americans of other peoples and cultures."—Adam Hochschild, author of Spain in Our Hearts: Americans in the Spanish Civil War, 1936—1939

"Hollinger tells an astonishing, counterintuitive story of how American Protestant missionaries went abroad armed with a radical egalitarian ideology and eventually came home to spread the gospel of multiculturalism, racial equality, and human rights. With verve and passion, he shines a brilliant light on their long-overlooked influence, showing how they transformed American society in ways we have not fully realized."—Kai Bird, coauthor of the Pulitzer Prize-winning American Prometheus: The Triumph and Tragedy of J. Robert Oppenheimer

"In this fascinating, important, and beautifully conceived work, David Hollinger shows that Protestant missionaries intending to bring Christianity to foreign peoples instead brought what they had learned about the humanity of others to American religious thought, social justice work, academic fields, and U.S. international affairs. Highly recommended."—Mary L. Dudziak, author of War Time: An Idea, Its History, Its Consequences

"The eminent intellectual historian David Hollinger restores liberal Protestants to their rightful place at the center of the history of struggles for rights, self-determination, and dignity at home and abroad. American missionaries' encounters with the world, Hollinger persuasively argues, challenged their most fundamental assumptions about the United States, undermining American parochialism and exceptionalism, and reshaping American culture and politics. This is an important book."—Thomas J. Sugrue, author of Sweet Land of Liberty: The Forgotten Struggle for Civil Rights in the North

"Between the end of the Civil War and the beginning of the Second World War, thousands of American missionaries, many animated by the social gospel, spread across the world. Their children came back to the United States, where they exerted an outsized influence on American foreign policy and shaped new forms of cosmopolitanism. Hollinger's illuminating study offers a fascinating account of an overlooked legacy."—Jill Lepore, author of The Secret History of Wonder Woman

"Writing with eloquence and confidence, Hollinger convincingly argues that the Protestant U.S. missionary experience had a surprisingly large and pervasive impact on American culture, politics, and society in the middle decades of the twentieth century. This is a much-needed book, with many masterful insights."—Ian Tyrrell, author of Reforming the World: The Creation of America's Moral Empire

"This learned book redresses a significant gap in the history of religion and U.S. intellectual history. Remarkably researched and beautifully written, Protestants Abroad shows how missionary-connected individuals shaped our understandings of social justice, American power, and domestic politics."—Melani McAlister, author of Epic Encounters: Culture, Media, and U.S. Interests in the Middle East since 1945