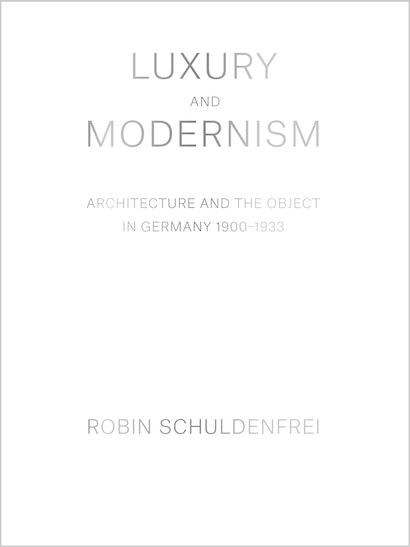 While modernism was publicized as a fusion of technology, new materials, and rational aesthetics to improve the lives of ordinary people, it was often out of reach to the very masses it purportedly served. Luxury and Modernism shows how luxury was present in bold, literal forms in modern designs—from lavish materials and costly technologies to deluxe buildings and household objects—and in subtler ways as well, such as social milieus and modes of living. In a period of social unrest and extreme wealth disparity between the common worker and those at the helm of capitalist enterprises generating immense profits, architects envisioned modern designs providing solutions for a more equitable future. Robin Schuldenfrei exposes the disconnect between modernism’s utopian discourse and its luxury objects and elite architectural commissions. Despite the movement’s egalitarian rhetoric, many modern designs addressed the desires of the privileged individual. Yet as Schuldenfrei demonstrates, luxury was integral not only to how modern buildings and objects were designed, manufactured, and sold, but has contributed to modernism’s appeal to this day.

This beautifully illustrated book provides a new interpretation of modern architecture and design in Germany during the heyday of the Bauhaus and the Werkbund, tracing modernism’s lasting allure to its many manifestations of luxury. Schuldenfrei casts the work of legendary figures such as Peter Behrens, Walter Gropius, and Ludwig Mies van der Rohe in an entirely different light, revealing the complexities and contradictions inherent to modernism’s promotion and consumption.

Robin Schuldenfrei is the Katja and Nicolai Tangen Lecturer in Twentieth-Century Modernism at the Courtauld Institute of Art, University of London.

"Robin Schuldenfrei’s smart and suggestive book Luxury and Modernism: Architecture and the Object in Germany 1900-1933 runs against the grain of what we would like to believe about our own aesthetic preferences, so often enshrined in our social formation, including in the professional education of architects. . . . Schuldenfrei’s book is likely to spur further insights into the degree to which the dissemination of Neues Bauen internationally was more closely tied to fashion than previous scholars have chosen to admit. At the same time, it may also help liberate us to create an architecture of true equality, something the Modern Movement seldom truly offered."—Kathleen James-Chakraborty, Architectural Review

"In Luxury and Modernism, Robin Schuldenfrei punctures the idealistic, lofty, socialist rhetoric of the Bauhaus’s artist-craftsmen. The Bauhaus, she reveals, imposed an elitist, aristocratic notion of taste on the masses, who largely didn’t want it."—Christopher Turner, Apollo

"Schuldenfrei carefully analyses a key aspect of Modernism’s embrace of abstraction that has confounded previous historians. . . . By exposing through the notion of luxury the paradox of Modernism, Schuldenfrei has made an important contribution to Bauhaus scholarship. This learned, original, counterintuitive, unorthodox and occasionally witty book could not have been published at a more appropriate moment."—Ines Weizman, Burlington Magazine

"In Luxury and Modernism, Schuldenfrei confronts the longstanding issue of modern architecture’s elitism, going to the heart of the canon and building up evidence in varied case studies."—Ani Kodzhabasheva, Architectural Histories

"Schuldenfrei’s Luxury and Modernism provides a model for a materially grounded, critically reflective and argument-driven reassessment of a canonical field."—Deborah Lewer, Art History

"Robin Schuldenfrei revisits the inconsistencies between modernism’s rhetoric and its accomplishments, offering a generous reassessment of its proponents’ proclivity for luxury . . . . Luxury and Modernism presents eloquent, well-researched, and courageous scholarship . . . . With her major contribution, Robin Schuldenfrei has given us much to reconsider."—Leslie Van Duzer, Journal of Architectural Education

"Considering modernism as luxury enables Schuldenfrei to investigate German modernism’s material manifestations, but also its broader social, cultural, and economic implications on fresh terms. The book’s introduction, presenting key issues in original yet accessible ways, and confronting modernism’s compelling rhetoric with its less-known, more-conflicted lived realities, should be a required text for graduate courses on modern design, architecture, and related topics. . . . Between its creamy cotton covers, Luxury and Modernism gathers, synthesizes, and further problematizes many critical reassessments of modernism."—Freyja Hartzell, Journal of the Society of Architectural Historians

"This provocative book upends long-standing tropes about the egalitarian credo and industrial mantra integral to the canonic episodes of German design history. Schuldenfrei unveils modernism's guilty pleasures to confront us with the foundational paradoxes at the heart of the Werkbund, the Bauhaus, and Mies van der Rohe’s most heralded residential designs."—Barry Bergdoll, Columbia University

"One of the most persistent myths about modern architecture is that it was inherently politically progressive. In this compelling account, Robin Schuldenfrei reminds us that modernism was often out of the reach of the masses, which of course enhanced its appeal to those who embraced its lavishness."—Kathleen James-Chakraborty, University College Dublin

"Luxury and Modernism offers many wonderful insights into a story we thought we already knew. By repurposing the notion of luxury away from being a taint, Schuldenfrei makes an important case for the depth and complexity of modernism as it was practiced, sold, and consumed."—Amy F. Ogata, author of Designing the Creative Child: Playthings and Places in Midcentury America

"Courageous and compelling, Luxury and Modernism is an important work that offers a critical reassessment of key figures and designs that have become central to our understanding of the birth, evolution, and legacy of modernism."—Monica Penick, University of Texas at Austin