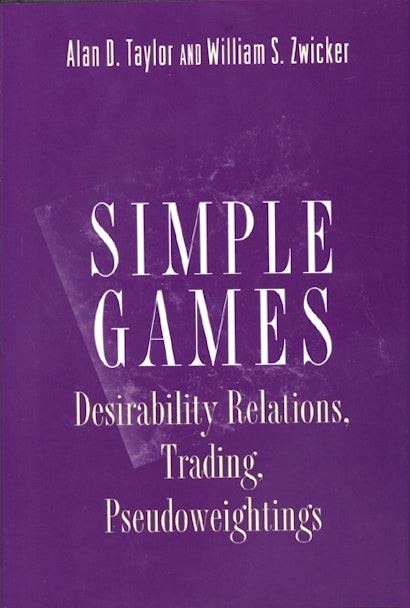 Simple games are mathematical structures inspired by voting systems in which a single alternative, such as a bill, is pitted against the status quo. The first in-depth mathematical study of the subject as a coherent subfield of finite combinatorics — one with its own organized body of techniques and results — this book blends new theorems with some of the striking results from threshold logic, making all of it accessible to game theorists. Introductory material receives a fresh treatment, with an emphasis on Boolean subgames and the Rudin-Keisler order as unifying concepts. Advanced material focuses on the surprisingly wide variety of properties related to the weightedness of a game.


A desirability relation orders the individuals or coalitions of a game according to their influence in the corresponding voting system. As Taylor and Zwicker show, acyclicity of such a relation approximates weightedness — the more sensitive the relation, the closer the approximation. A trade is an exchange of players among coalitions, and robustness under such trades is equivalent to weightedness of the game. Robustness under trades that fit some restrictive exchange pattern typically characterizes a wider class of simple games — for example, games for which some particular desirability order is acyclic. Finally, one can often describe these wider classes of simple games by weakening the total additivity of a weighting to obtain what is called a pseudoweighting. In providing such uniform explanations for many of the structural properties of simple games, this book showcases numerous new techniques and results.

"The authors do a nice job of bringing material from game theory, voting theory, graph theory, and threshold logic together with new results of the authors and presenting it coherently in the context of simple games. As such, it is a useful text for anyone looking for an introduction to simple games that gives not only several perspectives from which to view them, but also some of the latest results in the field and still-open questions."—Deanna B. Haunsperger, Carleton College

"The authors provide a deep analysis of simple games, particularly with respect to their central concerns of trading, weightedness, and coalitional ordering. They bring a fresh perspective to the field by approaching it from a voting-theoretic angle and utilizing the tools of threshold logic."—Duncan J. Melville, St. Lawrence University