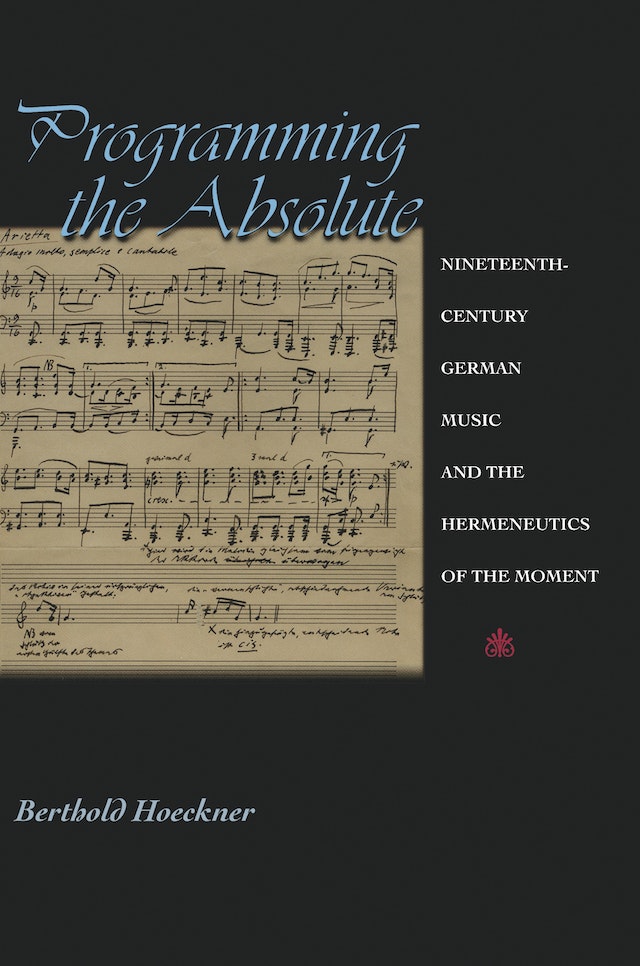 Programming the Absolute discusses the notorious opposition between absolute and program music as a true dialectic that lies at the heart of nineteenth-century German music. Beginning with Beethoven, Berthold Hoeckner traces the aesthetic problem of musical meaning in works by Schumann, Wagner, Liszt, Mahler, and Schoenberg, whose private messages and public predicaments are emblematic for the cultural legacy of this rich repertory.


After Romanticism had elevated music as a language “beyond” language, the ineffable spurred an unprecedented proliferation of musical analysis and criticism. Taking his cue from Adorno, Hoeckner develops the idea of a “hermeneutics of a moment,” which holds that musical meaning crystallizes only momentarily — in a particular passage, a progression, even a single note. And such moments can signify as little as a fleeting personal memory or as much as the whole of German music.


Although absolute music emerged with a matrix of values — the integrity of the subject, the aesthetic autonomy of art, and the intrinsic worth of high culture — that are highly contested in musicology today, Hoeckner argues that we should not completely discard the ideal of a music that continues to offer moments of transcendence and liberation.


Passionately and artfully written, Hoeckner’s quest for an “essayistic musicology” displays an original intelligence willing to take interpretive risks. It is a provocative contribution to our knowledge about some of Europe’s most important music — and to contemporary controversies over how music should be understood and experienced.

Berthold Hoeckner is Associate Professor of Music and the Humanities at the University of Chicago.

"Hermeneutics of the moment, both musical and historical, is the subject of this excellent book. . . . Closely argued and full of fresh, interesting observations, Hoeckner moves the discourse on hermeneutics to new level."—Choice

"Programming the Absolute is an extraordinarily ambitious, impressive, and remarkable document. It addresses a topic of real moment, so to speak, in romantic and postromantic music, one with far-reaching historical implications. It also addresses a number of deep-seated anxieties in current musicological thought and in that sense couldn't be more urgent or timely. It is a wonderful, often beautiful book."—Brian Hyer, University of Wisconsin-Madison

"This is an important book that many in music will profit from confronting. It is a performative work, embodying and recreating what it wishes to argue. It is also an exercise in hermeneutics and critical theory that shows how our own thought might be enriched by considering the problematics of musical utterance—a welcome emphasis."—James Hepokoski, Yale University