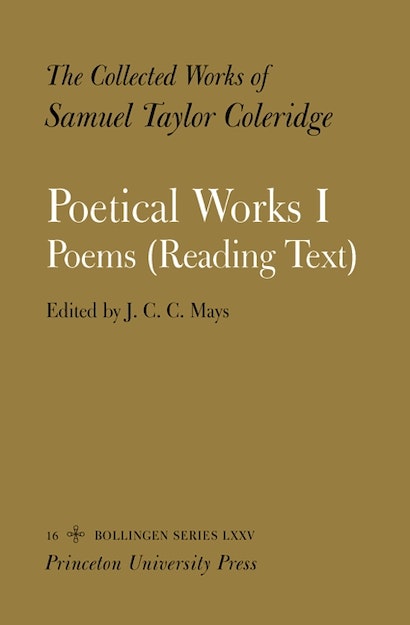 
The first part presents the reading texts of 706 poems in chronological sequence. Its blend of newly discovered and newly collected poems, presented in light of all known evidence and where practicable in unrevised forms, offers a fresh and original Coleridge: less inhibited by Victorian ideas about what poetry should be, moving easily and productively between genres and levels of seriousness. In texts that remained fluid and exploratory to the end, Coleridge alternates between lyric and satire, prophecy and conversation, symbol and allegory.


Each poem is accompanied by a headnote and commentary that together provide its historical-biographical context and offer key textual variants. The book opens with an introduction and chronological tables. The three appendixes position individual poems in the contexts in which they appeared during Coleridge’s lifetime. Illustrations such as contemporary scenes and portraits bring this rich collection, like the companion volumes, all the more to life.

J.C.C. Mays is Professor of Modern English and American Literature at University College Dublin. He has published on English Romantic and Irish Modernist writers and is currently editing Diarmuid and Grania for the Cornell Yeats.

"A landmark in Anglo-American scholarship."—Jim McCue, The Times

"There is something to celebrate in the fact that J. C. C. Mays has added these final volumes . . . to the monumental Princeton University Press Coleridge. Coleridge's verse can now be read in full, and in a form worthy of his best writing. The poems are beautifully presented.... In general, this Collected Poems serves its editor's wish: we see a fuller Coleridge . . . [with] his exceptional intelligence and sensibility and breadth of information, his exquisite eye and ear."—Barbara Everett, London Review of Books