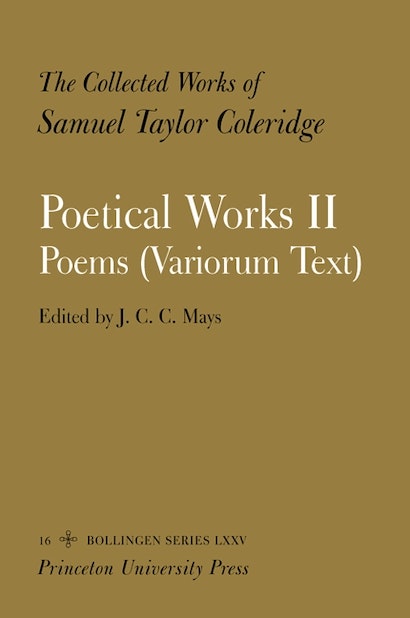 
The second part presents the same 706 poems as the first, in the same chronological sequence, but differently records in each case all known textual information in collated form — allowing for alternative construals of the reading texts. An additional 135 items are inserted into the same sequence, comprising poems mistakenly ascribed to Coleridge or of dubious authenticity and poems that remained only in the planning stage or that are referred to but have not been recovered. The index of titles and first lines incorporates the full range of variants.


All told, the Collected Coleridge variorum sequence collates over a third more additional texts — in more detailed and accurate form — than those found in the previous standard edition, by E.H. Coleridge. The presentation method in this second part will interest editorial theorists as well as those interested primarily in Coleridge and/or the making of poetry. The unusually detailed textual information also reveals changes in such areas as linguistic and grammatical usage, patterns of transcription and circulation among anthologists, and contemporary publishers’ house styles.

J.C.C. Mays is Professor of Modern English and American Literature at University College Dublin. He has published on English Romantic and Irish Modernist writers and is currently editing Diarmuid and Grania for the Cornell Yeats.