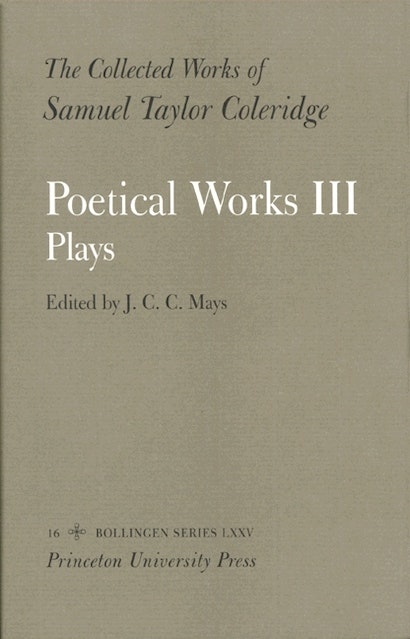 
Coleridge’s plays form a vital part of his poetic achievement. This part covers all of them — twelve altogether, including collaborations, adaptations, and plays left unrevised or in note form. It considers his drama translations as well. Coleridge’s practical engagement with theater over a span of twenty years influenced his approach to other, lyric forms as well as, for example, his assessments of Shakespeare and of public taste. As in the first and second parts, all known manuscript, printed, and annotated versions have been collated to produce reading texts, and much new information, historical as well as textual, is presented in the commentary. The index covers proper names and prominent themes and features of all three parts.


The presentation of four plays is of particular interest. Coleridge’s translations of Schiller’s Piccolomini and Death of Wallenstein are accompanied by facing texts of the German originals (the first reconstructed by Joyce Crick, the second from a manuscript authorized by Schiller himself) so that, for the first time, Coleridge’s practice as translator can be properly assessed. Secondly, Remorse is presented in stage and printed-text versions; the former demonstrates how Coleridge’s play evolved in the course of the rehearsal process and during performance, how it was received and how it enjoyed an afterlife in contemporary theatres, whereas the printed-text version developed quite differently. This authoritative volume offers a revealing and comprehensive portrait of Coleridge’s work in the dramatic form.

J.C.C. Mays is Professor of Modern English and American Literature at University College Dublin. He has published on English Romantic and Irish Modernist writers and is currently editing Diarmuid and Grania for the Cornell Yeats. Until her retirement, Joyce Crick was for many years Senior Lecturer at University College London, and is now Special Professor in Modern Languages at the University of Nottingham. In 2000 she was awarded the Schlegel-Tieck Prize for her translation of Freud's The Interpretation of Dreams.