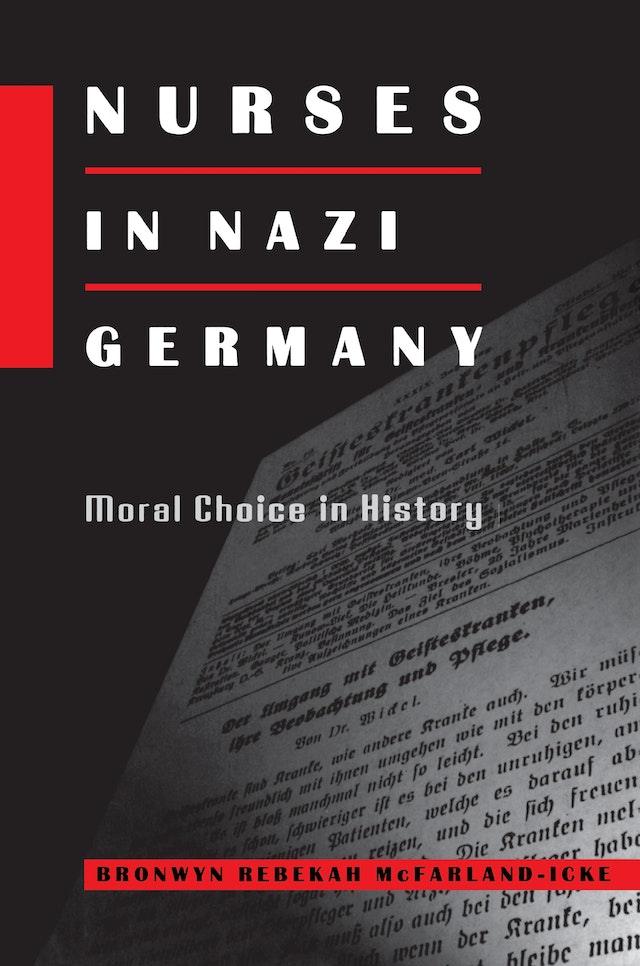 This book tells the story of German nurses who, directly or indirectly, participated in the Nazis’ “euthanasia” measures against patients with mental and physical disabilities, measures that claimed well over 100,000 victims from 1939 to 1945. How could men and women who were trained to care for their patients come to kill or assist in murder or mistreatment? This is the central question pursued by Bronwyn McFarland-Icke as she details the lives of nurses from the beginning of the Weimar Republic through the years of National Socialist rule. Rather than examine what the Party did or did not order, she looks into the hearts and minds of people whose complicity in murder is not easily explained with reference to ideological enthusiasm. Her book is a micro-history in which many of the most important ethical, social, and cultural issues at the core of Nazi genocide can be addressed from a fresh perspective.


McFarland-Icke offers gripping descriptions of the conditions and practices associated with psychiatric nursing during these years by mining such sources as nursing guides, personnel records, and postwar trial testimony. Nurses were expected to be conscientious and friendly caretakers despite job stress, low morale, and Nazi propaganda about patients’ having “lives unworthy of living.” While some managed to cope with this situation, others became abusive. Asylum administrators meanwhile encouraged nurses to perform with as little disruption and personal commentary as possible. So how did nurses react when ordered to participate in, or tolerate, the murder of their patients? Records suggest that some had no conflicts of conscience; others did as they were told with regret; and a few refused. The remarkable accounts of these nurses enable the author to re-create the drama taking place while sharpening her argument concerning the ability and the willingness to choose.

Bronwyn Rebekah McFarland-Icke lives in Germany and is an adjunct lecturer in the University of Maryland's European Division.

"This thoughtful, thorough, and nuanced study rejects easy answers. . . .Instead, the author seeks to explain how training, organization, and retraining under the Nazis prepared nurses to participate in murder."—Choice

"In this groundbreaking book, McFarland-Icke has taken an important step in revealing how trained medical professionals killed in spite of a guilty conscience and carried out this task with precision, efficiency, and without comment."—The Lancet

"McFarland-Icke does a superb job of remaining objective, avoiding the simplistic stereotyping of her subjects as singularly evil or morally weak-willed, without in any way compromising judgement about the evil of the acts they committed. This work is not entirely one of historiography, nor psychological analysis, nor moral appraisal. It is instead a narrative deepened and enriched by her very thoughtful analysis of context, human responses to unsolvable dilemmas, and moral vulnerability."—Barbara J. Daly, Medical Humanities Review

"The descent into mass murder, for ordinary Germans like psychiatric nurses, was for the most part a matter of choices avoided. How the moral senses could be and were blunted by institutions and ideologies on the one hand and by personal subterfuges on the other—this is the subject of McFarland-Icke's careful and painstaking historical recounting and analysis. This is a quiet and watchful book, devoid of the sensationalism that so easily adheres to the subject of mass murder. But for that reason it has a powerful and lasting effect that extends beyond the historic subject matter."—Michael Geyer, University of Chicago

"Thoughtful, sensitive, and revealing, this book brings something new to the discussion of the perpetrators in the Nazi era, particularly those associated with the medical profession. This is history 'from the bottom up' of the very best kind."—Robert Gellately, Strassler Professor in Holocaust History, Clark University

"Nurses in Nazi Germany is bold, meticulously researched, and insightfully argued. Its topic is an important and relatively neglected one. Attracting general readers and scholars alike, the book should have a very long shelf life—not simply as the definitive history of Nazi nursing but as a major contribution to bioethics literature and ethics more broadly."—Robert N. Proctor, Professor of the History of Science, Pennsylvania State University