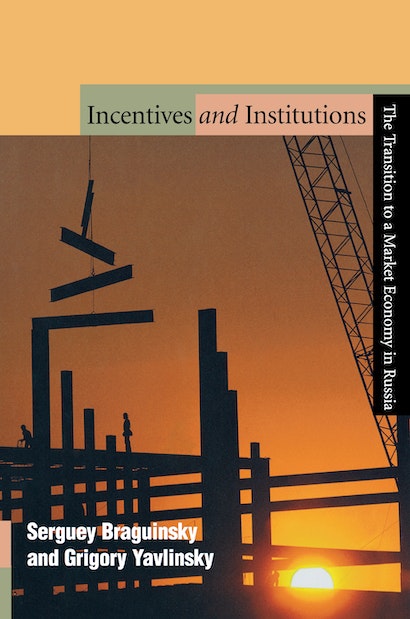 Here, for the first time, two of Russia’s leading economists provide an authoritative analysis of the transition to a democratic market economy that has taken place in Russia since 1990. Serguey Braguinsky, a Russian economist with extensive international experience, and Grigory Yavlinsky, leader of the liberal “Yabloko” party and a major public figure in Russia, focus on the institutions that are critical to a successful transition and the economic incentives needed to make these institutions work. Finally, they discuss in detail the specific components of the economic processes that are necessary for economic transition in general and they draw lessons that can be applied to other nations dealing with similar transitions.


In 1989, Grigory Yavlinsky became a member of the Commission for Economic Reform and wrote the groundbreaking “500 Day Plan,” which outlined the first program of transition to a market economy. Two years later, he co-wrote the program of strategic cooperation between the Soviet government and the West (known as the “Grand Bargain”). Here he and Serguey Braguinsky examine what went wrong with the Russian plan — and what is needed to put the economy back on the road to becoming a fully functioning market economy.


The first section of the book presents a new interpretation of the political economy of the socialist state and the incentives and institutions that underpin it, with an emphasis on the present Russian situation. The second part deals with the political economy of “spontaneous transition” and the inefficiencies inherent in economies that lack the organizations and institutions that inhere in established Western democratic economies. In the final section, the authors present a program of actions to put the economic transition in Russia back on track, based on their assessment of the actual current state of both the economy and the government. Their approach is unique in emphasizing organizational evolution at the microeconomic level instead of stressing macroeconomic issues such as money and inflation that are at the heart of most arguments.


This is a thoughtful and thought-provoking book and one that will be widely discussed and debated.

Serguey Braguinsky is Associate Professor of Economics at Yokohama City University, Japan. He is the author of previous books in Russian, including Monetary Policy in Japan, and is coauthor and editor of a book in Japanese, Industrial Change in China and Russia. He has published articles in numerous journals and is the first Russian scholar to obtain tenure in economics from a university in Japan. Grigory Yavlinsky is a Russian economist and leader of the "Yabloko" party. He is a member of the Duma and was a candidate for the presidency of Russia in 1996. He is the author of numerous books, including Transition to a Market Economy, The Grand Bargain, and Lessons of Economic Reform in Russia.

"A major contribution to our knowledge of how the Russian economy works today and why it is now in the process of failing, written by two of the most prominent and insightful Russian economists working today. The subject of the book is of immense importance and the book contains penetrating insights."—Michael D. Intriligator, University of California, Los Angeles