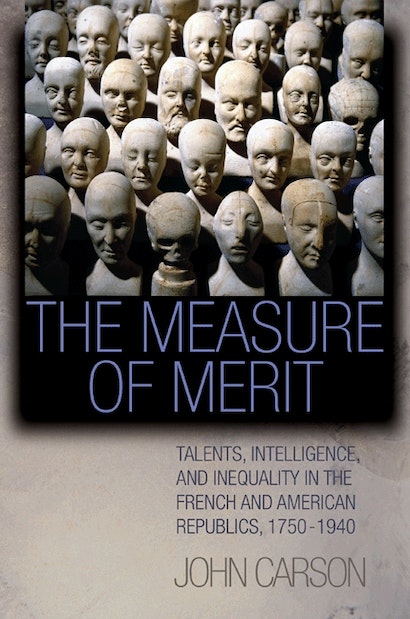 How have modern democracies squared their commitment to equality with their fear that disparities in talent and intelligence might be natural, persistent, and consequential? In this wide-ranging account of American and French understandings of merit, talent, and intelligence over the past two centuries, John Carson tells the fascinating story of how two nations wrestled scientifically with human inequalities and their social and political implications.


Surveying a broad array of political tracts, philosophical treatises, scientific works, and journalistic writings, Carson chronicles the gradual embrace of the IQ version of intelligence in the United States, while in France, the birthplace of the modern intelligence test, expert judgment was consistently prized above such quantitative measures. He also reveals the crucial role that determinations of, and contests over, merit have played in both societies — they have helped to organize educational systems, justify racial hierarchies, classify army recruits, and direct individuals onto particular educational and career paths.


A contribution to both the history of science and intellectual history, The Measure of Merit illuminates the shadow languages of inequality that have haunted the American and French republics since their inceptions.

John Carson is Associate Professor in the Department of History and Director of the Science, Technology, and Society Program at the University of Michigan.

"How . . . do societies committed to equality deal with differences among people? In The Measure of Merit, John Carson . . . offers an informative, exhaustively researched account of how France and America each addressed this challenge. His narrative reveals how positivism, the rise of social science, and cultural beliefs converged to shape our modern notions of intelligence. . . . [S]cholars in several disciplines will find Carson's arguments relevant and engaging."—Scott Henderson, Science

"Carson's book speaks to a wide audience. Philosophers, historians, political scientists, and psychologists alike will find The Measure of Merit a rewarding read. Richly nuanced and informed by a diverse collection of source, this book documents how the French and American republics reconciled the tension posed by egalitarianism and meritocracy in the face of what seems to be natural intellectual hierarchies."—S. Brian Hood, Historical Studies in the Physical and Biological Sciences

"Carson has written a superb book which succeeds in highlighting one of the great anomalies of American culture, the national obsession with intelligence testing."—Philip Nord, H-France Review

"The Measure of Merit is a detailed comparative history of ideas about individual ability among French and American intellectual elites.... This book must be read by anyone interested in the historical construction of the idea of individual intelligence and should becomes a standard in the history of psychology."—Patrick J. Ryan, Journal of American History

"The Measure of Merit is an impressive piece of scholarship. [It] will give any reader much to think about."—J. David Hoeveler, Reviews in American History

"Carson deftly shows that while opponents may disagree profoundly over the principle of affirmative action, they tend to agree that the debate is all about how to define merit. . . . Carson's historically based advice to tone down the rhetoric and stake out the common ground shared by the debate's participants is worth following."—Ian Dowbiggin, American Historical Review

"Carson's book undertakes the complex task of historicizing both the scientific and the political meanings attached to a set of terms that are difficult to define, internally unstable, and repeatedly contested but that nonetheless have entered into common parlance in consequential ways. Toward this end, he has written a clear and compelling history of methods of gauging human differences as they developed within two different scientific disciplines (anthropology and psychology), in two different national contexts, and across nearly two centuries. This is a daunting task, and The Measure of Merit is a very impressive achievement."—Leila Zenderland, Isis

"Carson tells this story with clarity and insight. . . . [H]is study is comparative history at its best and its message fundamental. Quantitative versus qualitative assessment of merit in education lies at the very heart of current national debates; the political choices made will profoundly affect our future."—Christopher H. Johnson, Journal of Interdisciplinary History

"John Carson has written an ambitious, stimulating, and provocative book that is not afraid to advance big ideas. It is elegantly written and a pleasure to read. It will stimulate much discussion and argument among historians of American and French science."—George Weisz, Journal of Modern History

"This is a painstaking study which should deservedly take its place alongside the classics in the field."—David J. Bartholomew, Intelligence

"John Carson's deep and wide-ranging book gives a rich account of a concept that came to be quantified. It is exemplary for its alertness to the evolving meanings and changing patterns of usage of words like 'talents' and 'intelligence,' and still more for the ways it situates these ideas historically and shows how they were made to matter. . . . Within the complex and detailed exposition of Carson's book, there is an important story of historical developments on a grand scale, of the development of tools and concepts for measuring intelligence, and of the changing role of intellect in public life from the eighteenth-century Enlightenment to the Second World War."—Theodore M. Porter, Modern Intellectual History

"I know of no book on this topic which equals the scope, sophistication, and explanatory power of Carson's study. The Measure of Merit, by comparing the French and American debates over the meaning and measure of intelligence, underscores the historical accommodations and conflicts which lie behind that totemic concept."—Ken Alder, Northwestern University, author of Measure of All Things

"John Carson's wonderful book situates the idea of intelligence in relation to republican ideals of equality and self-improvement as well as medical doctrines of abnormality and biological ones of heredity. It is a fine work of intellectual history that goes beyond ideas to address measurement tools and clinical practices in France and the United States."—Theodore Porter, University of California, Los Angeles