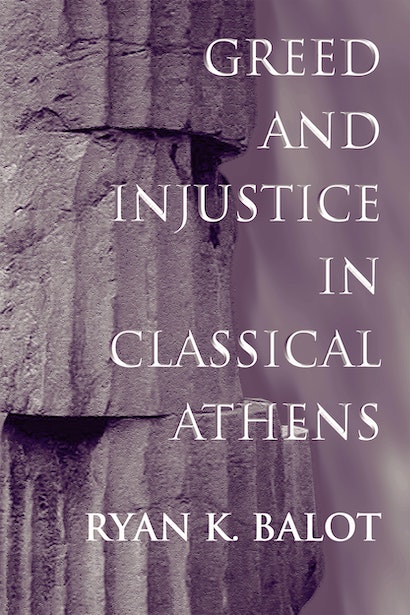 In this original and rewarding combination of intellectual and political history, Ryan Balot offers a thorough historical and sociological interpretation of classical Athens centered on the notion of greed. Integrating ancient philosophy, poetry, and history, and drawing on modern political thought, the author demonstrates that the Athenian discourse on greed was an essential component of Greek social development and political history.


Over time, the Athenians developed sophisticated psychological and political accounts of acquisitiveness and a correspondingly rich vocabulary to describe and condemn it. Greed figures repeatedly as an object of criticism in authors as diverse as Solon, Thucydides, and Plato — all of whom addressed the social disruptions caused by it, as well as the inadequacy of lives focused on it. Because of its ethical significance, greed surfaced frequently in theoretical debates about democracy and oligarchy. Ultimately, critiques of greed — particularly the charge that it is unjust — were built into the robust accounts of justice formulated by many philosophers, including Plato and Aristotle. Such critiques of greed both reflected and were inextricably knitted into economic history and political events, including the coups of 411 and 404 B.C.


Balot contrasts ancient Greek thought on distributive justice with later Western traditions, with implications for political and economic history well beyond the classical period. Because the belief that greed is good holds a dominant position in modern justifications of capitalism, this study provides a deep historical context within which such justifications can be reexamined and, perhaps, found wanting.

Ryan K. Balot is Assistant Professor of Classics at Washington University in St. Louis. He has published articles on Chariton, Vergil, and Aristotle.

"[A] timely and sophisticated interdisciplinary study, involving not only ancient political theory, but also modern ethics, the concepts of distributive justice and individual virtue. . . . Students of political theory will find this study, which illuminates many basic issues both thoughtful and invigorating."—David F. Graf, Religious Studies Review

"The intellectual breadth and depth of the project is most impressive. Moreover, the scholarship is thorough . . . primary sources are regularly cited and sometimes quoted and the writing style is as consistently clear as it is literate and, from a critical standpoint, au courant. Altogether, Balot's study is to be highly recommended across the wide spectrum of disciplines it so splendidly reflects."—Nicholas F. Jones, The Historian

"This book is excellent: original, well researched, and well written. Balot's approach is groundbreaking and entirely successful. The result is a project that crosses all sorts of disciplinary boundaries and is simultaneously an intellectual history and a political/economic history."—Charles Hedrick, University of California, Santa Cruz

"This is very much an intellectual history, but Balot's comparisons of different authors have much in common with the kinds of intertextual analyses of literary critics. This sets this very good and ambitious book apart from other recent work in Greek history."—Ian Morris, Stanford University